We continued south-west on the Haast Highway, popping out at the coast briefly before the road wound back inland.

A common sight around these parts

Named after a paddle steamer called Bruce which brought in gold miners and explorers way back when, it’s hard to picture this remote area being home to 2000 people during the gold rush. With about six permanent residents now, the only rush these days is from inquisitive people exiting their vehicles at this popular photo spot. As well as being a rugged windblown (well it definitely was that day) beach, it has lots of driftwood and amazing pure white stones. There’s also an interesting ritual of writing messages on rocks. 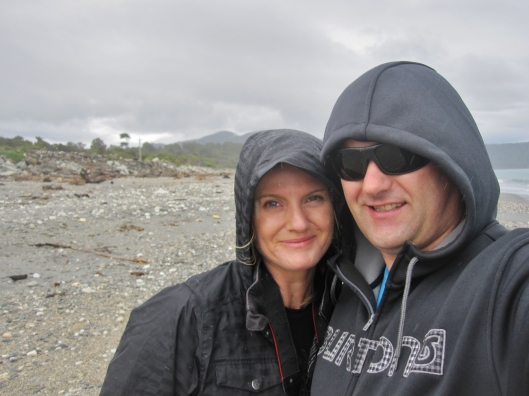 This stop was memorable. Not for the natural treasures which this scenic reserve contains, but for the mosquitos, dozens of the little buggers. A few people had been staying in the Dept of Conservation campground judging by the tents, and we wondered how they had coped. Needless to stay we didn’t linger for too long. However, it was a beautiful and peaceful place. Like most major lakes in the South Island, Paringa was formed by glaciers a very, very, very, very long time ago. 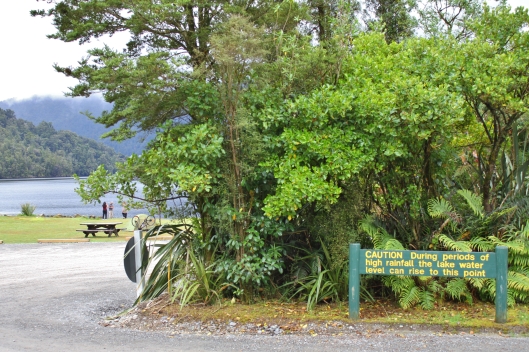 Where the highway pops out at the coast again there’s another stopping opportunity. As well as some great views of dramatic coastline and native bush (which we did appreciate through the wind and rain), a plaque at Knight’s Point commemorates the 1965 milestone when the final section of the Haast Highway was completed nearby, which for the first time established a road link between Otago and Westland.

The small river Tauperikaka acquired a new name when part of a ship was found washed up on the beach, believed to be from a shipwreck off the coast of Australia. Loved this stop – there are so many fantastic natural features to race round with a camera after. Must do the walkways next time, there’s one to a lake and another through the ancient kahikatea swamp forest. 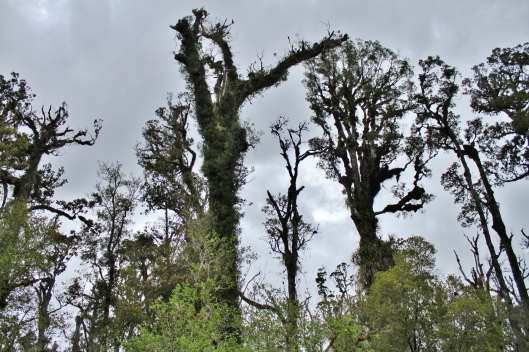 We steered back inland again, pausing for a bite in Haast Junction and a mosey through the visitor centre-slash-museum, before continuting toward Haast Pass. This is the lowest of the passes that cross the Southern Alps and forms part of the boundary between Otago and Westland. There’s a truck load of potential stopping points and walks through here but we limited our activities to things that could be done without too much faffing. A five minute return walk fitted the bill nicely.

The height of these falls doesn’t break any records but does indicate the level of the glacier when the Haast River was formed a hundred or so centuries ago. And just the short walk-in alone was worth it.

We drove over the single lane iron bridge at the Gates of Haast. While fairly impressive in itself, I spied a glimpse of white water below, so we veered into the carpark up the road and I scuttled back. Here the Haast River narrows and drops and water thrusts over the massive boulders in the riverbed. A tramping track departs from here and goes below the bridge which would have been cool to investigate – but Mike was back with the car and we still had much to do.

A couple of k’s up the road I unfortunately wasn’t onto it enough to be ready for the wee old explosives hut at the side of the road which harks back to when the road was being built.

Pining for the hut visit and photo that wasn’t, I was somewhat placated by another waterfall stop. This involved another short walk through masses of lush greenery and across a dry part of the riverbed. Just visible at the foot of the falls are the concrete foundation remains of a water wheel used during the construction of the Haast Highway. 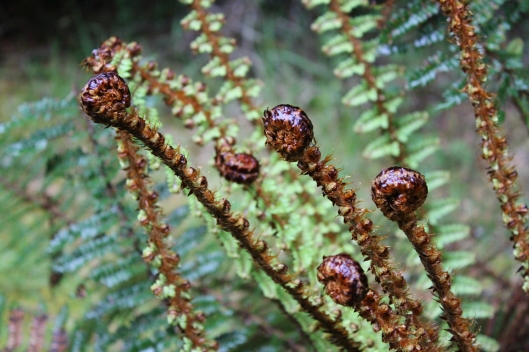 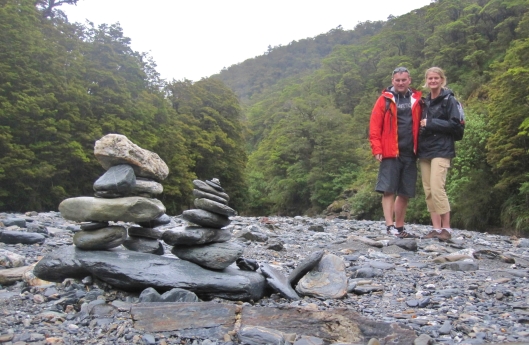 We crossed the highest point of Haast Pass and again I was caught on the hop for we sailed on by without stopping for a look and a compulsory photo or two.

‘Twas not long before we were at the northern tip of Lake Wanaka – not an end I think I’d seen before. I’m more acquainted with the southern end where the Wanaka township sits. This is NZ’s fourth largest lake, sitting in a narrow but long glacier-carved channel, and is flanked by mountainous peaks. You can imagine how gorgeous this area can look in winter.

We stopped a couple of times and the strong wind was a blessing as it prevented any lurking mossies from being able to settle on our succulent flesh. 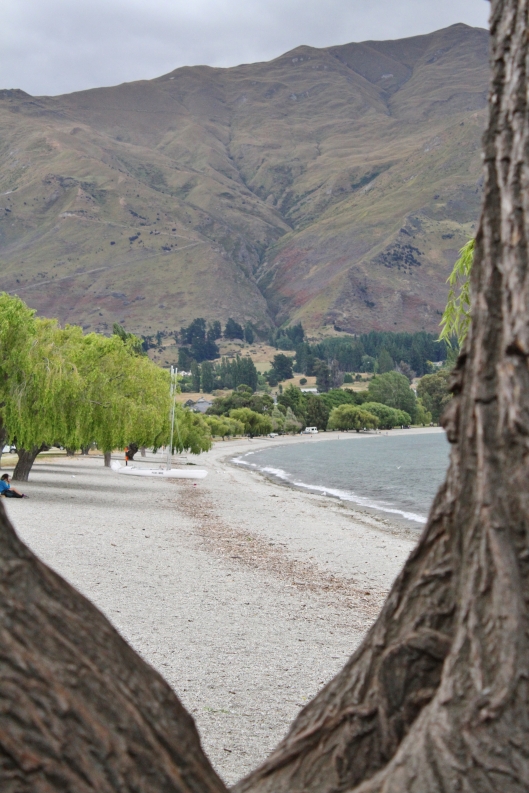 Nearby and running parallel with Lake Wanaka is Hawea. Back when glaciers ruled, the lakes were connected by ice over a pass now called The Neck which the main road traverses. Today they are part of the massive hydro-electricity network in the lower South Island and the level of Lake Hawea was artificially raised in the 1950s to allow more water to be stored. Like its neighbour, the southern end of the lake is where the township is. 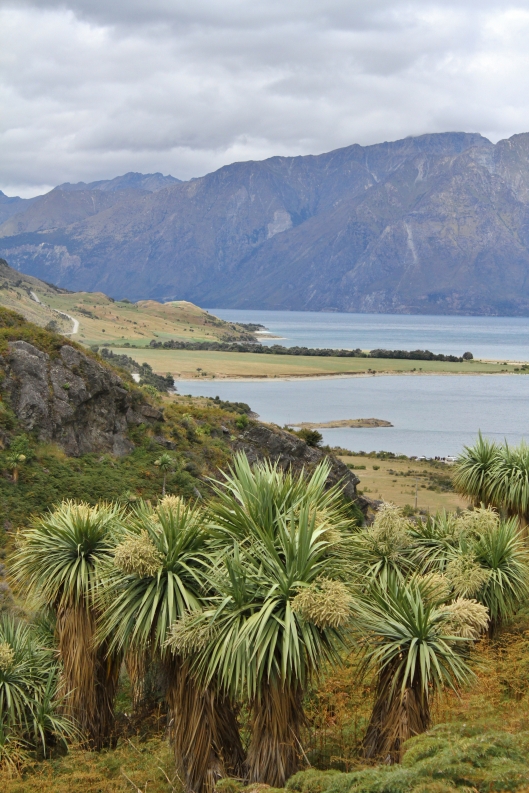 Lake Hawea from the Neck

We were almost done. After a well-deserved beverage in Wanaka we drove into the historical Cardrona Valley for our overnight stop.