Our last night of the trip was to be spent just north of Christchurch. Nowhere exciting, just somewhere to break up the State Highway 1 march north. By mid afternoon we were in the vicinity of the Garden City and we took the opportunity to head in, the first time we’d been there since the earthquakes and a few weeks out from the second anniversary of deadly 22 February 2011 quake.

That horrible day which crippled a city and halted a nation happened the same month I started this blog. To help me process the event I wrote a post with some photos of our previous visit there. That was in 2008, so fast forward to this trip it had been quite a while since we last saw Christchurch.

With the road closures we didn’t really know where we were going, but we parked on Oxford Terrace beside the river and followed our noses from there. 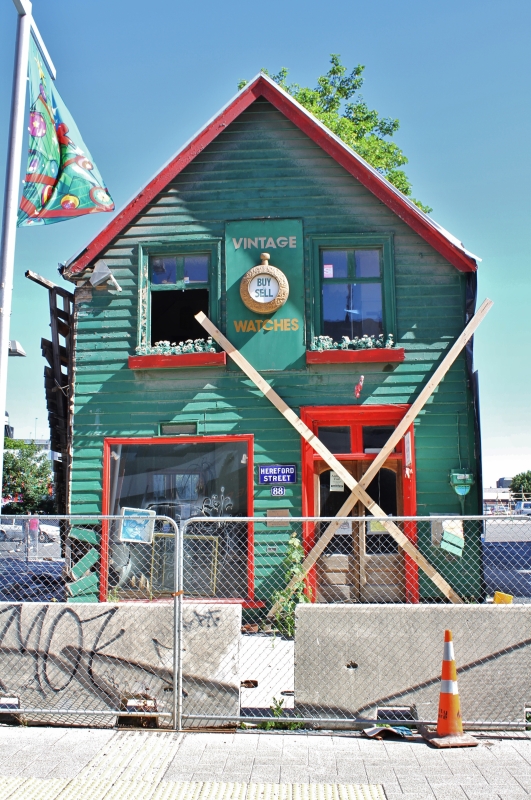 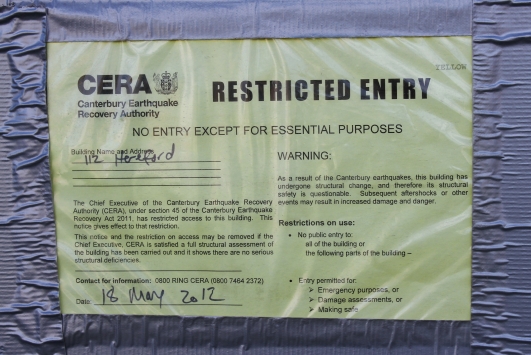 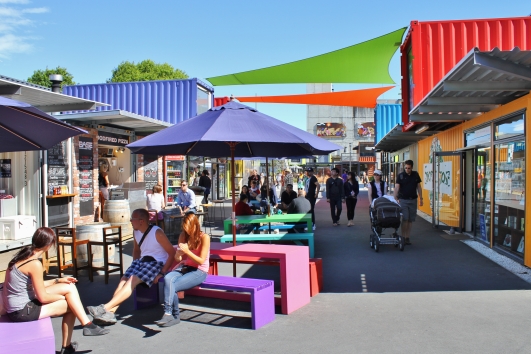 This container mall (named Re:START) was set up to help bring life back to the CBD. It had a great vibe when we walked through

Several countries sent teams to help with the search and rescue effort. I interpret this message as being on 26/2/11 at 5pm, team 1 of the New South Wales firefighters forced entry into this building and found it to be clear of people

I didn’t visit Christchurch often enough to become overly familiar with the layout of the inner city, so while it was still a bit confusing to walk around I wasn’t as impacted as many have been when it suddenly hits home how many familiar landmarks are missing. Or perhaps worse, there are so many empty lots it must be hard to remember what was where.

Is it better to remember what was there so that you can honour its memory, or to have accidentally forgotten meaning you kind of can’t?

Near here we called into one of the reopened cafes, C One Espresso, and found it to be excellent. We saw a sprinkling of open cafes/bars and they all seemed to have the happy atmosphere that people, sunshine and a convivial beverage or two bring. It is impossible to imagine the challenges the proprietors have gone through to (re)open but it is they who are helping to pioneer the rebirth of the inner city. 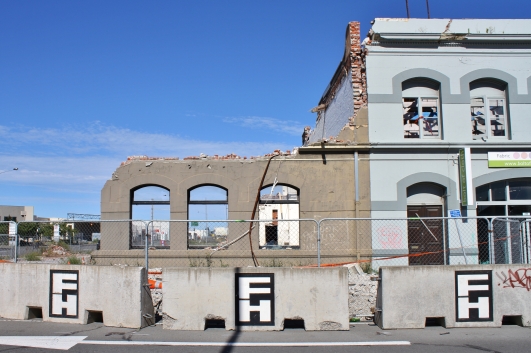 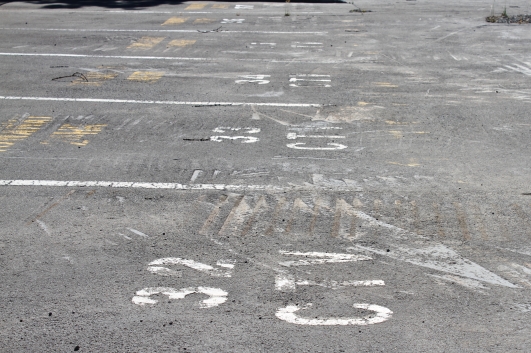 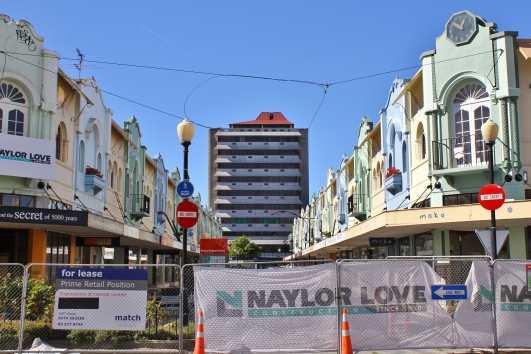 Christchurch’s first street mall, New Regent Street, escaped relatively unscathed and is meant to be reopening soon. It was built during the Depression and has distinctive pastel-coloured Spanish Mission style architecture. Note the clock in the top right corner – it is stopped at 12.51pm, the time the earthquake struck

We were fortunate to be there on a day where some of the CBD red zone had been opened up which enabled a good view of the Christchurch (Anglican) Cathedral. 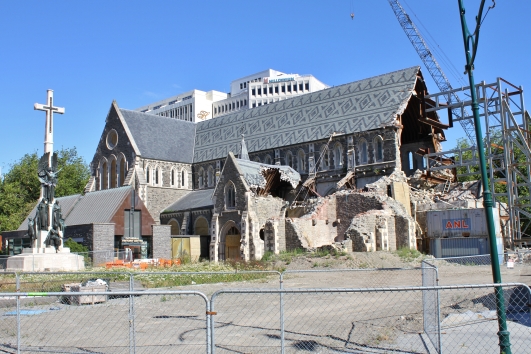 In the meantime, a ‘Cardboard Cathedral’ is being built near the CTV site

You can see a current view of its progress here. 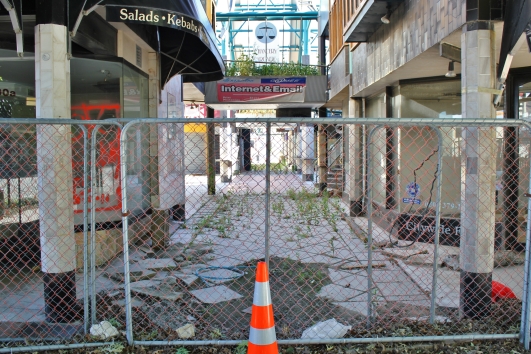 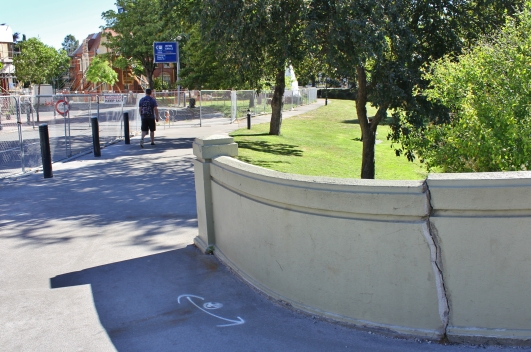 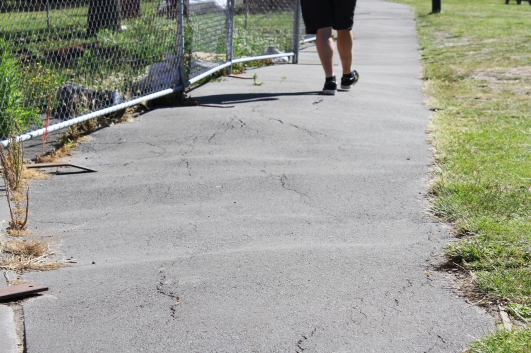 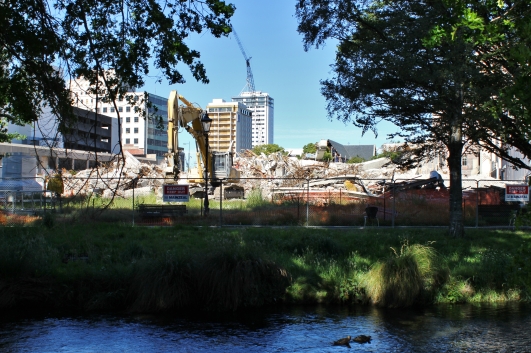 The Bridge of Remembrance memorial was unveiled in 1924 and looks remarkably ok. But the arch is cracked and needs >$2m to fix. With no timeframe on that, it’s been left in a vulnerable state with a cost-based decision made to not erect temporary reinforcing

That’s as far as we went. The land status map maintained by the Recovery Authority is useful to see the various parts of the city still classified as red zone and to see the progress over time.

As far as the CBD goes, the physical city is very slowly mending. Much of the demolition has apparently finished and the rebuild plans look comprehensive and exciting. It will be a fantastic place when it’s finished. How much of the old city heritage will remain, well that’s still up in the air. Not as much as many people would like.

The social city is slowly mending too I think. Other aspects will take much, much longer.