The last couple of days have seen energy levels at their lowest and highest with activities ranging from tummy bugs to heli boarding.

Wednesday was to have been our second day up at Cardrona. However, unbeknownst to us there is a vicious wee bug doing the rounds down here which I would pick up. So Tuesday night was, well, unpleasant. Mike had to suffer through my repeated trips to the bathroom but luckily didn’t get it himself.

The following morning saw a couple of tired people with one especially pathetic person unable to do more than really lie there with body aches and chills. Mike ended up doing an afternoon at Cardrona though it was again very cold with flat light. He had big plans the next day and didn’t want to overdo it.

In true 24-hour bug fashion, by yesterday morning I felt much better. Fortunately, as logistics were a little complicated. We were due to check out of Benbrae and Mike was heading to Qtown for the day and I wasn’t.

Mike had a great opportunity to fulfil a long time goal to go heli boarding. That endeavour is completely beyond me so I made my own more sedate plans. Mike left early with all our gear to meet his group over in Queenstown and I caught a shuttle bus up to Cardrona. The weather has been getting progressively more mild and no chains were required either over the Crown Range Rd or up the mountain.

At Cardrona, where I continued my quiet laps of McDougalls, the conditions were cloudy clearing to blue skies. Crowds were bigger than the other day though at times the lift queues died right back. From the lift there were good views of the Winter Games boardercross event and adventurous people on the half pipe. I had a good day.

So did Mike. They got in eight runs somewhere at the south end of Lake Wakatipu and finished off with a drink at the very swish Hilton. The helicopter diverted at one stage to assist in rescuing a guy (in another heli party elsewhere) who found himself under 2m of snow. He was ok.

I got to Wanaka via snow bus around 5.30pm and parked up beside the lake to wait for Mike returning from Qtown. There are far worse places in the world to be waiting! Gorgeous.

The day rounded out with pizza from well known local eatery The Cow. While chowing down on melted cheese (sorry food allergies) and whatnot we decided to enjoy some local sights the next day rather than head back to the mountain. The appeal of Otago goes way beyond snow! 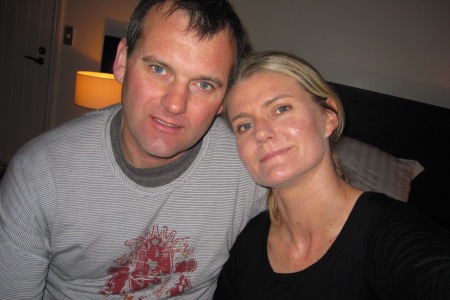 About to embark on our separate missions

Waiting for my ride up to Cardrona

At the bottom of McDougalls. Another cloudy day 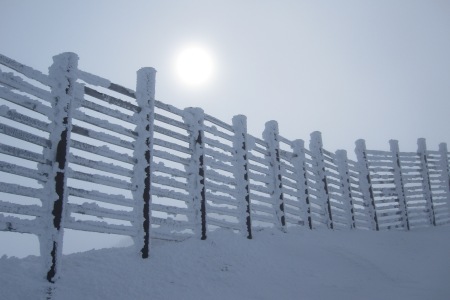 Fence at the top of McDougalls

The cloud did eventually clear 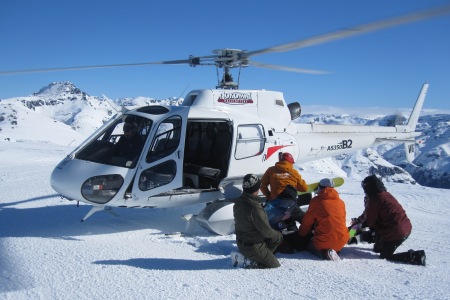 Mike was among two groups sharing a heli

Heading down to their lunch stop

Not bad views over Lake Wanaka

The mountain opened today and though conditions were going to be a bit dodgy, the lure of fresh powder was more than Mike could bear. So we were off… after the not-insignificant tasks of getting clothes and kit together, de-icing the car windows, putting chains on etc. Mike did a great job of the latter, under my excellent supervision.

There was a bit of new snow overnight but not bucketloads. Wellington is still being hammered by the southerly storm and I’m a bit sorry to be missing it actually. I feel a bit short changed where we are as the Cardrona Valley seems to have gotten off relatively lightly. Maybe I’ve just hexed it by saying that?

At the bottom of the mountain access road there was a car jam as chains were fitted, so with that task already done we blew right by. As much as you can blow by with chains on.

The first few k’s were ok but higher up the road steepened, the wind got a bit ferocious and the road more icy. Still, Mike’s 2×4 wagon held its own amongst the convoy of 4x4s. Though when the road got quite slippy you can betcha I had a firm grip on the door handle and was relieved when eventually we arrived at the top.

At that stage of the day only a couple of runs were open and they were selling lift passes at the half day rate given the rest of the mountain was in doubt. We bought our passes and I bought a lesson and then Mike literally headed for the hills.

Having not been to the mountain for a couple of years and only reaching the status of a vaguely competent novice I wasn’t exactly brimming with confidence. My lesson was early afternoon so I filled the time just puttering around the beginners’ slope.

I booked a private lesson this time, only an hour mind you given the price of these things, in an effort to kick start my re-acquaintance with the snowboard. My instructor Jesse was from Lake Louise so I mentioned my brief visit there a few years ago. He was good value and maybe I didn’t suck as much as I thought I might, so I was feeling pretty good about things at the end of the hour. At least to the point of continuing to putter around McDougalls on my own.

But after a few more runs my legs started to fatigue – unfortunately I let work get in the way of fitness leading up to the trip – so I pulled the pin. And happily waited in the bar for Mike to finish up, which he was in no hurry to do on account of the insane (quote/unquote Mike) conditions over at Captains.

The weather had started to clear by then but earlier in the day snow fell quite consistently and the wind whipped through, causing exposed hair and woolly hats to grow ice coatings. The snow and the sky were the same colour and you could not really discern the terrain. Still the snow was nice and soft should one have cause to involuntarily eat it. Happily I didn’t come a cropper too spectacularly.

We headed back to the resort at about 4pm and made a beeline for the jacuzzi and the refreshments. 🙂 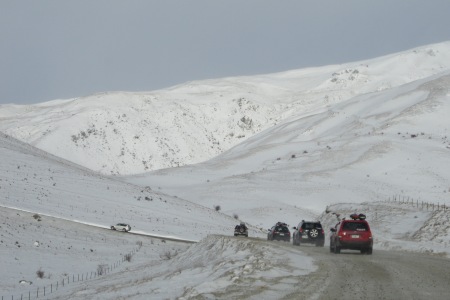 The convoy heading up the hill

Higher up the wind was obvious to see. The roads are nice and wide which makes it all feel a bit safer

Morning rituals underway in the carpark

Mike visited briefly but I'm too much of a handbrake for him to stay for long! Hat and hair looking very white by this stage 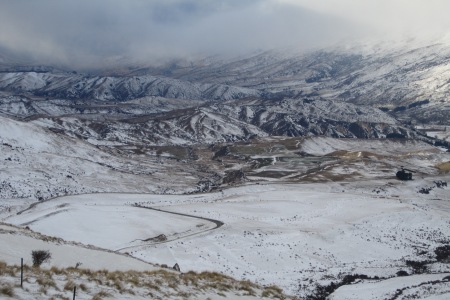 View of the valley on the way back down

Snowed in and loving it

Right now we’re in the Cardrona Valley on day four of our winter break. I had been recounting my North America trip of a few years ago with a goal to finish before heading down south. However that master plan was scuttled by work pressures so I’ll get back to it later. There are more immediate travel tales to get on with!

We should have been up at the ski field today but it was closed on account of the dose of Antarctic weather currently sweeping the country. Amazingly there’s also been snow at home in Wellington and even in Auckland. Unheard of.

Cardrona is a teeny place and it was a bit of a mission getting here yesterday, which I’ll post separately about. We were planning to stay in Wanaka but a special deal came up at the Benbrae Resort, a fantastic place about three minutes walk from the iconic Cardrona Hotel. A little further along are the access roads to Cardrona ski field and Snow Park / Snow Farm. Since we were planning to spend most mountain time up at the Cardrona fields, staying close by in the valley made sense.

The scenery is stunning and white and it is a real novelty to stay somewhere like this. I’ve grown rather fond of the perfectly temperatured outdoor hot tub, especially being submerged in it while the snow is falling. We’re fully self contained but will also make good use of the pizza bar here at the resort and the food and drinks down at the hotel. We may have been down there a couple of times already…

Some others staying here have had travel plans mucked up by the weather given roads and airports have been closed. It is nice to not have any of those pressures; still, with snowboard gear not being used cabin fever may yet set in! 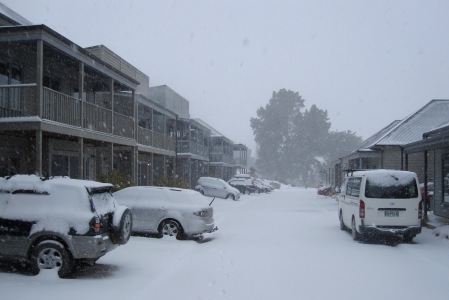 The snow status in the resort this morning! 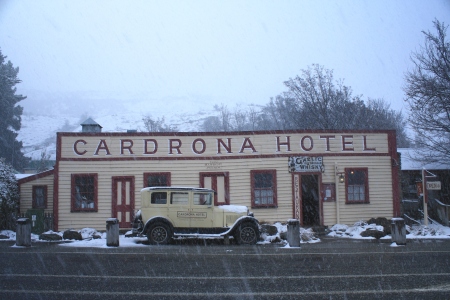 How cool is that! My mocha from the Cardrona Hotel this morning. 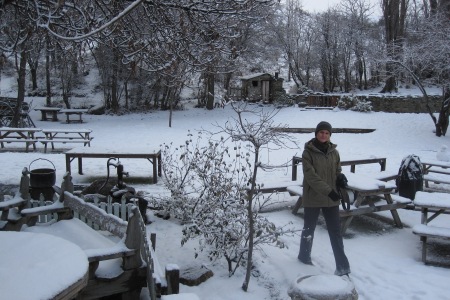 Backyard at the Cardrona Hotel

The awesome outside fireplace

How to combat bitterly cold wind on the morning walkabout

Not standard attire, unless one is heading for the hot tub

The place to be on a cold snowy day!