It was our last full day at the ranch and while we currently had a grand total of 0 bear sightings, some of our group had in fact seen three the day before – including one that strolled through the ranch grounds! (The resident dogs make great alarms.) So the pressure was on and we gritted our way through another early start.

This morning’s pre-breakfast activity was a riverside trail walk requiring a drive to get to the starting point. On the way we stopped to talk to a grader driver who hadn’t yet been able to get out of his truck to said grader on account of the two grizzlies that crossed the road and onto the adjacent property after he arrived. With that tidbit of news we waited to see if they would reappear – only to hear a gunshot. Then a second, and a third.

Adrenaline was now surging for all concerned and I started to feel upset that the bears may have been shot. We returned to where the grader driver was and subsequently a truck from within the property drove out to talk to him as well. Turned out to be the owner of the gun we heard – and with much relief we learned he was shooting to scare. This had been the second morning that bears had been through his property, and today they also left a paw print on his truck window!

Our starting point was nearby and while we knew there were two bears around, chances are they’d taken off at a great rate of knots. We parked and entered the trail at a deliberately obscure and unmarked spot. 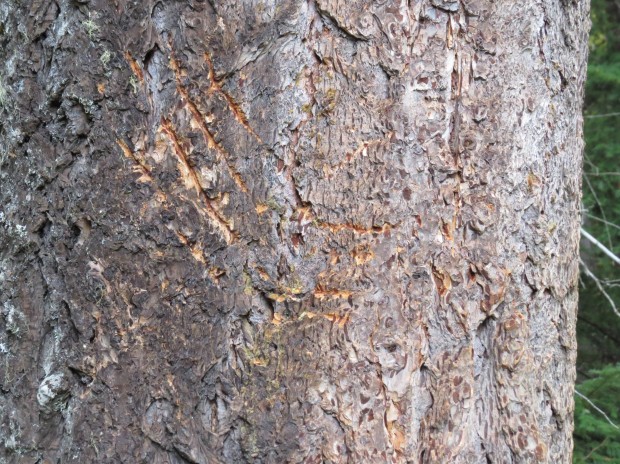 A favourite tree for scratching and rubbing up against. Not by us, I should point out.

One of a few motion detection cameras set up to record wildlife.

Pretty sure Paul said the vague track-like line is a remaining sliver of an old coach road.

About to meet the other group along an old section of the river.

Across the river from the ranch. 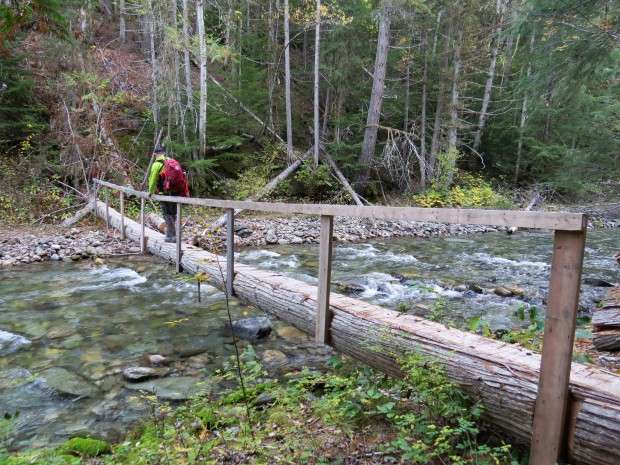 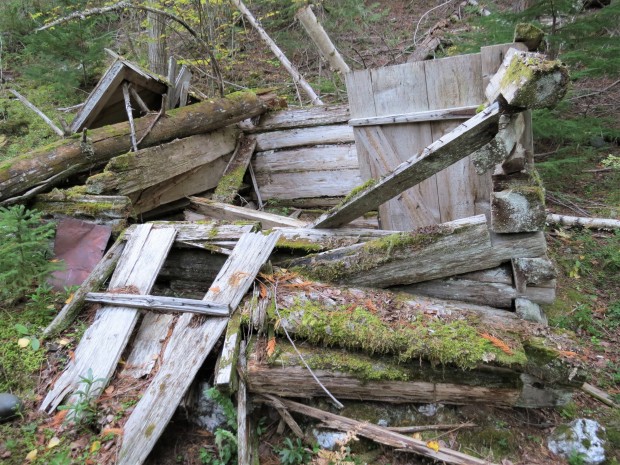 Remains of a cabin! Always rapt to find stuff like this! 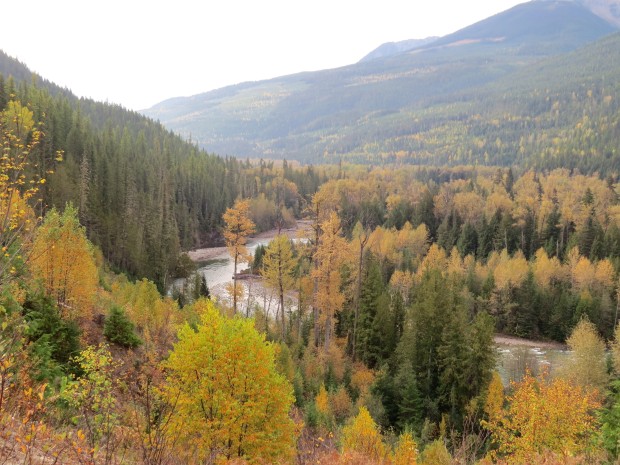 Despite deliberately walking on wildlife trails, there wasn’t a skerrick of bear to be seen. It was a great walk nonetheless, just look at that environment. The afternoon expedition took us out for a drive firstly to see a local salmon spawning channel. It is a fascinating circle of life and navigational phenomenon that sees many salmon return to their birthplace to themselves spawn (and die). Funnily this has been seen to occur also with salmon born in farms which I imagine is an exercise in frustration.

The Meadow Creek Spawning Channel where about 3-500,000 of the vividly coloured kokanee make their way from Kootenay Lake. If I recall correctly, the duller fish lurking below the kokanee are trout seeking a salmon meal 😐 …

The spawning channel is necessarily quite long, just over 3km, and was peppered with signage warning that bears were about and to stay in your vehicle. We did see one chap (of the human variety) out with a clipboard counting fish.

We carried on and got a radio call from the other group out and about that would finally prove fruitful and zoomed to the area. We parked roadside and huddled quietly in foliage overlooking the river… 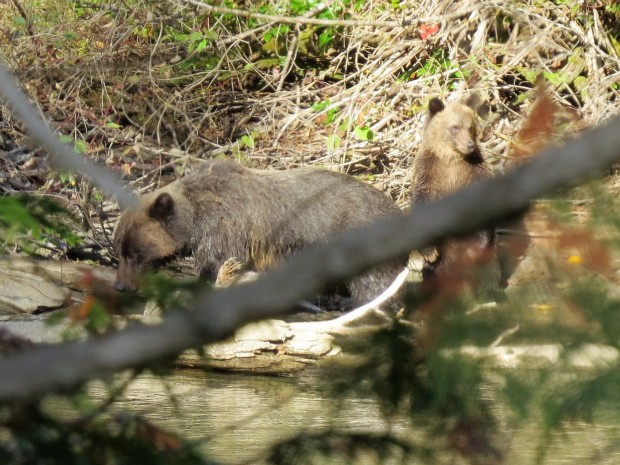 FINALLY! A mama grizzly and cub. 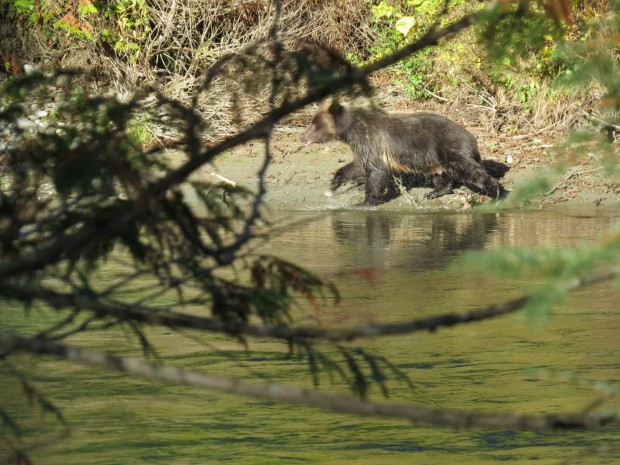 We strained to see them, quietly but frantically taking photos in between branches, before the bears moved out of sight. We scooted up the road to try and leapfrog the bears, heading riverside on foot to see if we could see them.

…We didn’t; if they had become unsettled they may have been moving in the treeline.

Over the radio we heard the bears had been seen again so we swiftly relocated. The other guide and his party were on the river bank, we were in two vehicles roadside.

Baby was in the river, mama was getting titchy…

And then it was all on: baby was heading down stream and mama – who was already a bit agitated by our presence – followed, getting scarily close to the group on the river bank.

Those of us roadside were instructed to take cover in or behind the vehicles while Oly got ready with the bear spray. (Whoops, another photo of Mike’s butt.)

After a few tense seconds, mama moved on and so could we. The group on the river bank were shaken but quite alright. I can report, to finally get a bear sighting let alone in those circumstances was exhilarating. We were stoked!

Buzzing, we carried on up to Trout Lake for a look, though it seemed we had reached our bear quota for the day.

Our final (very enjoyable) dinner in the lodge led to our final early morning start. We headed out in vehicles to see what we could see.

This is all I came away with, nice though the early light was.

After another impressive breakfast, souvenir purchases and final formalities, it was time to leave the ranch. 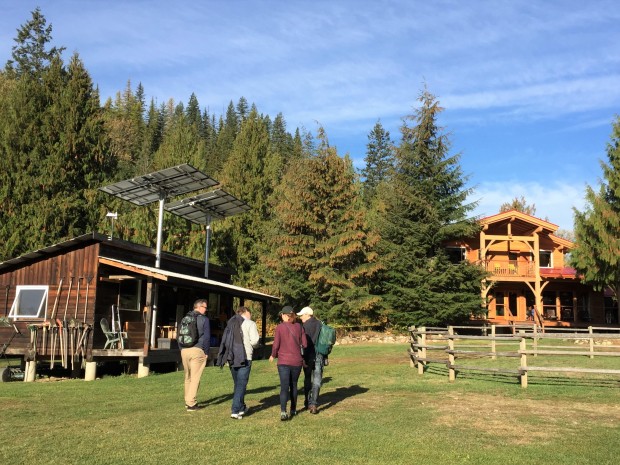 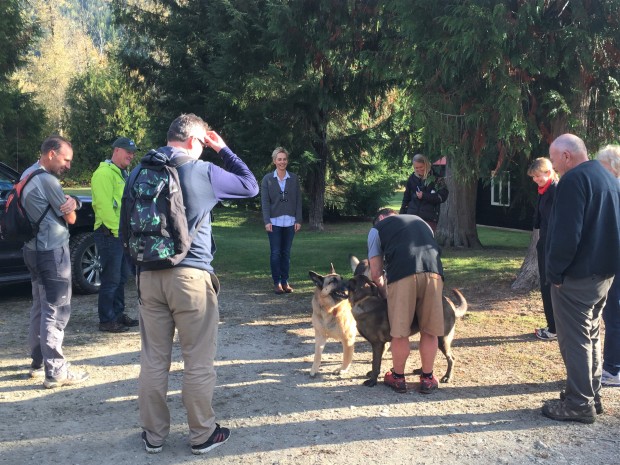 Resident dogs Masha and Karu were among the farewell party. They’ve since had to start sharing their turf with a new youngster called Katya.

We piled back into the trucks one last time to get a lift back to Kaslo, reflecting on the great experience it had been. While our bear sightings were hard to come by, when you see the expanse of wild habitat and without the same reliability of the river for feeding as was the case in Bella Coola, and with some human intervention in the region such as logging and hunting, it’s not guaranteed that 2.5 days at the ranch will in fact yield anything. However, the experience and skills of the GBR team and the activities they offer vastly increases your odds of seeing bears – and feeling safe while doing so. It is such a privilege to see bears in the wild; I’m not a religious person but I hope to God that that Julius, Kristin and their many like-minded others, succeed in their quest to ban the abhorrence that is grizzly hunting in British Columbia.

Brief stop on the road to let a couple of goats trot off up a ridiculously steep bank.

Mike and I reunited with our rental car – which we’d come into a bit of grief with later in the day on our long drive to Whistler.