More blue lakes and a ski resort in summer 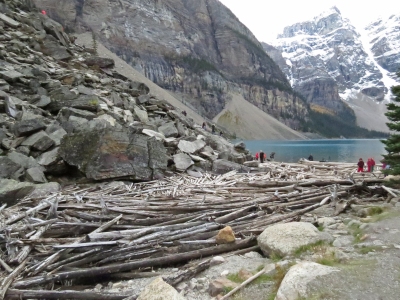 Lake Louise is an amazing area to visit. It gets a deluge of visitors too, being just 40-odd minutes from Banff in prime Canadian Rockies territory. We’d each been here separately many moons ago and were looking forward to reconnecting with some familiar turf as well as making some new memories. We covered a few things over a couple of visits.

After finishing the Bow Valley Parkway on that dreary day we stopped off at Lake Louise village for lunch. Foolishly this coincided with when everyone else was also looking for food so parking and seating was at a premium – a perfect breeding ground for hangriness. As brains had not been fully engaged upon leaving Banff, Lake Louise was also the only place we’d be able to buy grocery supplies for our next three nights in Field; luckily there is a pretty well stocked mini supermarket, higher priced though it may be.

On our previous separate visits we’d both stayed in the Hostelling International lodge and I wanted to do a drive-by of it, for old time’s sake. However I slightly alarmed myself after we followed my instinctive directions which resulted in ultimate failure – the place was in fact in the opposite direction on the opposite side of the road.

About 4km up the road is the actual lake called Louise. She’s quite a large and colourful lass and has a big fancy hotel perched on the edge (which furnished a beverage and chocolately cake goodness later on). The light rain which had been a feature of the morning’s drive continued and I did feel a little aggrieved that Louise was being moody like she had been 12 years before, but wotevs.

Throwback! It was a dull low-cloud day on that visit too. 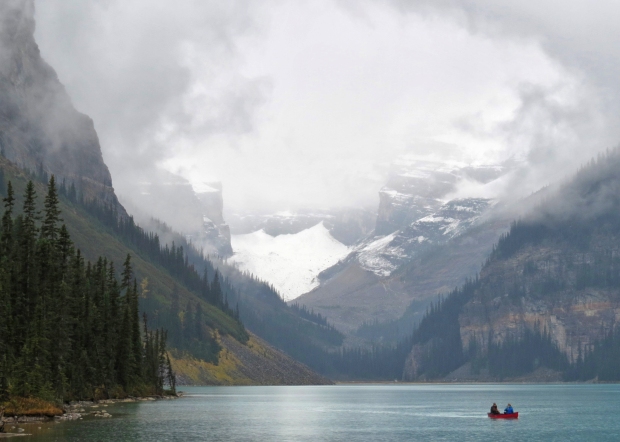 The last canoe out on the water makes its way back to the boathouse.

Drizzling though it was we joined the steady stream of other travellers on the 2km walk to the end of the lake.

This wee golden-mantled squirrel raced around our feet while we studied a sign.

From the far end looking back to the Chateau.

In ’04 I headed up the snowy trail to the Plain of Six Glaciers Tea House. Not today.

Part-way up the road to the lake called Louise is a turn-off to a lake called Moraine. It’s a winding scenic drive of 11km which is closed for more than half the year after the snow arrives. Then it becomes the domain of cross-country skiers.

A good way before we reached the carpark the roadside parking began and we groaned in anticipation of mega-crowds. However we arrived after peak visitation and it wasn’t too bad. My previous visit here had been by tour bus; Mike’s roughly 10 years before that had been by hitch-hiking. 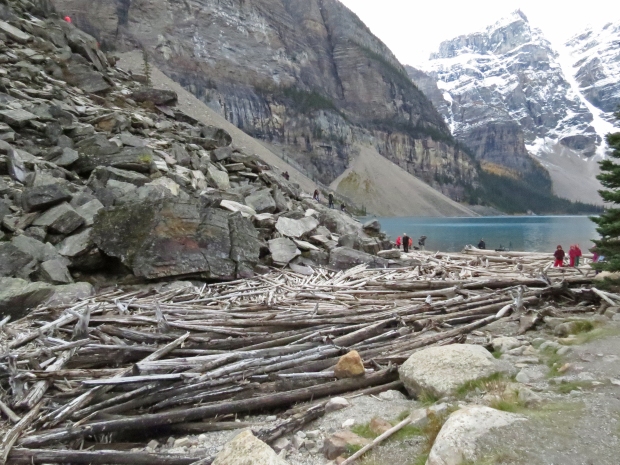 Across the log jam is The Rockpile, aka the lake’s namesake moraine left behind by the glacier, where everyone clambers up for photos. 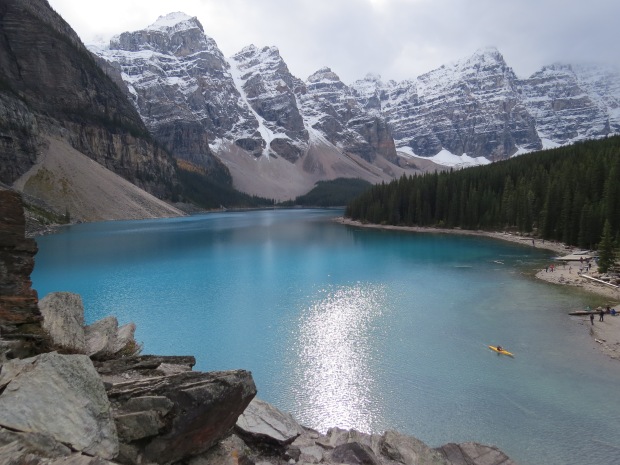 The moraine makes for a perfect viewing platform! No prizes for guessing how the name Valley of the Ten Peaks was acquired.

We walked a short way around the lake trail, past this turn-off with its safety notice. 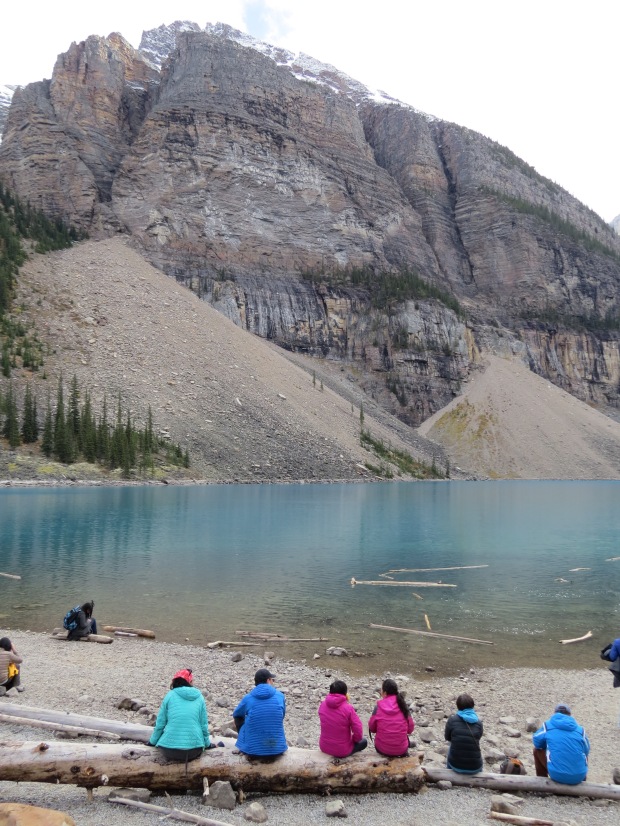 A good angle to gauge the relativity. It is always incredible imagining glaciers as they used to be. Mind you, Canada was once upon a time basically covered in ice which is almost beyond comprehension.

Neither of us had been to the ski area before and having a mild fascination with how ski resorts transition from winter to summer, it was a definite inclusion on this trip. Plus it is bear habitat so there could be a chance sighting. Lucky for us the weather was on-form.

Nice day for a gondola ride – or chairlift if you’d prefer. 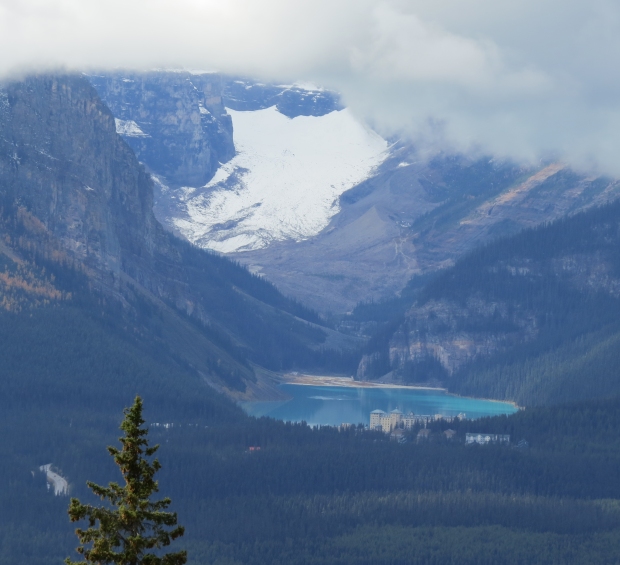 An amazing view over to Lake Louise and Victoria Glacier. 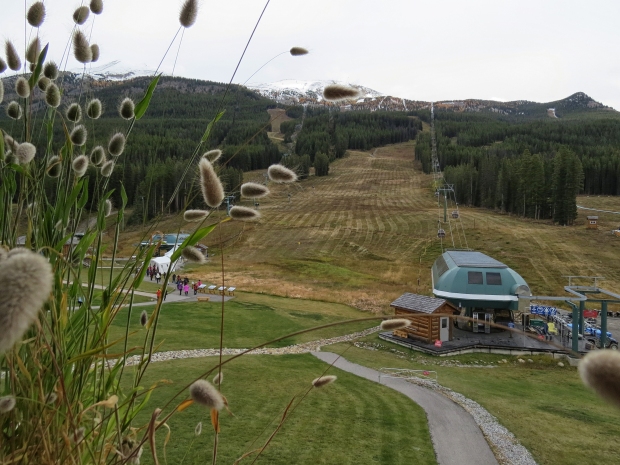 Views from upstairs in the main lodge building. This shows but a dot of the 4200 acres of skiable terrain available.

Not a confident snowboarder at the best of times (the bigger they are, the harder they fall is an apt expression) I haven’t been on my board for a few years since buggering both my wrists which has left them a bit permanently stuffed. Nevertheless, I loved the look and feel and vastness of this place and would, I’m fairly certain, enjoy a winter trip here. 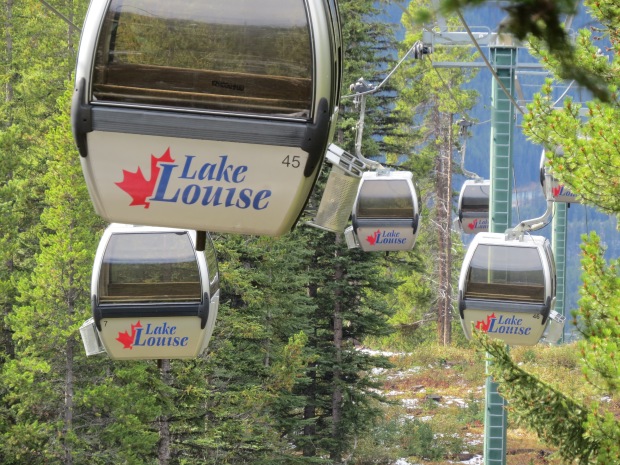 Continuing one of the trip themes, we went on a short walking tour about bears! About 12 grizzlies hang out in this general area and while none felt inclined to make an appearance, they had definitely been here.

It was time to leave Alberta properly and head back into BC.