At a ridiculous time of night a few months out from our trip we sat poised over the keyboard and at the appointed hour, after a few tense minutes, managed to secure tickets to Lake O’Hara. Demand always outstrips supply so we were rapt that we’d be among the lucky few able to see one of Yoho’s most outstanding features.

On the appointed day we arrived at the carpark (smack in the middle between Field and Lake Louise) and checked in for the bus. There was a mix of day visitors like ourselves along with those staying out there. Lake O’Hara has a lodge, hut and campground – even though it was getting pretty cold for the latter there were a few hardy souls with camping gear. 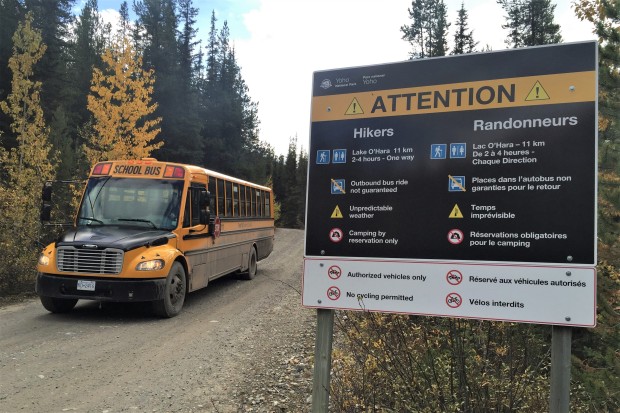 I hadn’t heard of Lake O’Hara prior to the trip, Mike came across it while researching. It’s not a big deal just because of its named water feature, there’s a much larger area filled with hiking trails and general natural awesomeness. To protect all this, Parks Canada limits the number of people accessing the lake by bus each day across the relatively short 3-4 month season that the road is open. Ultra keen people can hike the 11km into the lake – however that sounds overkill since the main reason to visit to go hiking once at the lake.

We tucked into the squishy schoolbus seats and set off for the lake, passing a surprising number of people who were doing it on foot. In winter the road becomes a cross-country ski trail. Once out there, in anticipation of ice and snow around the trails we found makeshift hiking poles in the box of spares and set off.

We went east around the lake making slow progress on account of stopping frequently to gawp at the views. 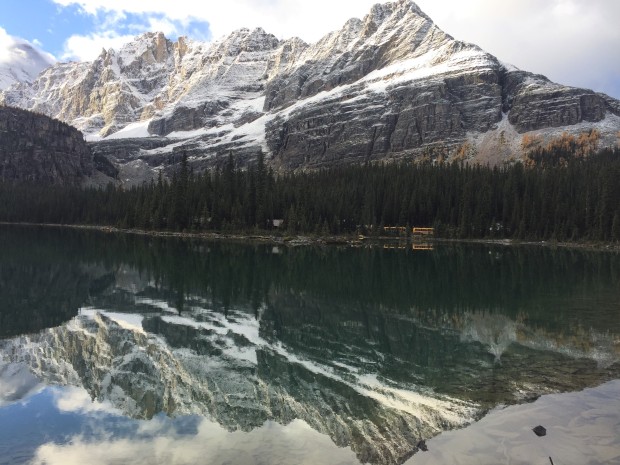 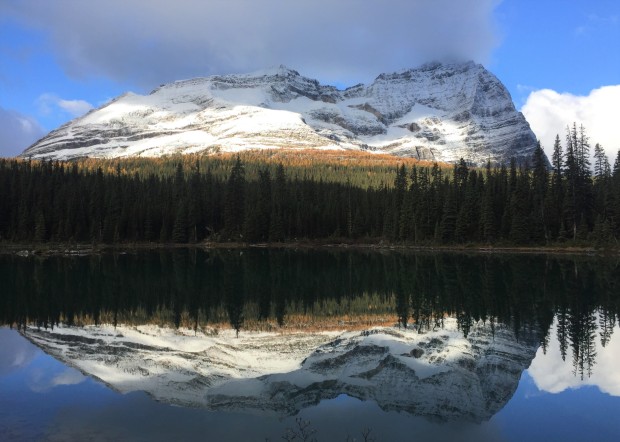 I was also pretty excited to see small wildlife. 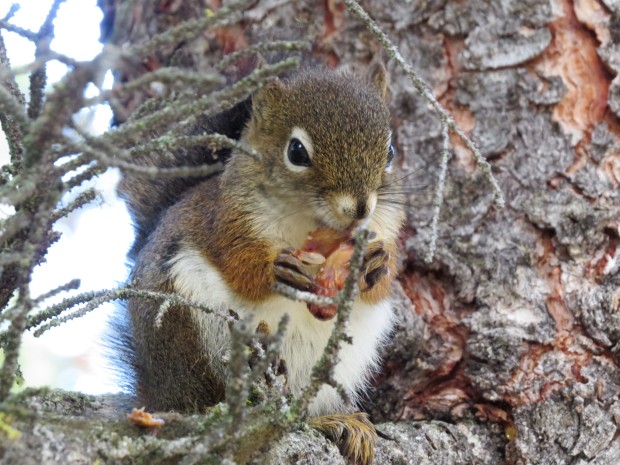 About half way round the lake we hung a left to take the eastern trail up to Opabin Lake. We were soon trekking up a series of never-ending switchbacks. This was the first real test after my anaemia diagnosis and fortunately the iron tablets seemed to have kicked in. It was bloody hard yakka but I wasn’t the mess I was a few days before in Vancouver after a mild uphill bike ride.

During this Everest-like ascent we passed the snow line and eventually emerged up into a valley with waterways, autumnal larch trees and more tiny creatures. 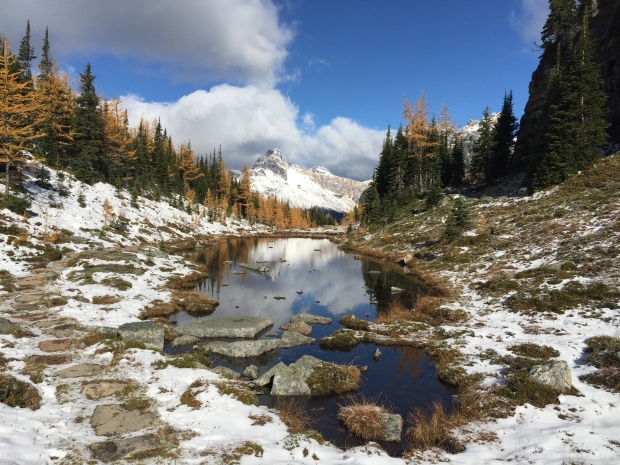 Woohoo, we made it to Opabin Lake.

Not far from there we reached the lookout over Hungabee Lake, the highest point of our hike. Fantastic views – apologies for throwing our ugly mugs in the way, it doesn’t do nature’s beautiful colour contrasts any justice at all. Our route back down to the lake was all downhill from here – that would soon be an understatement. 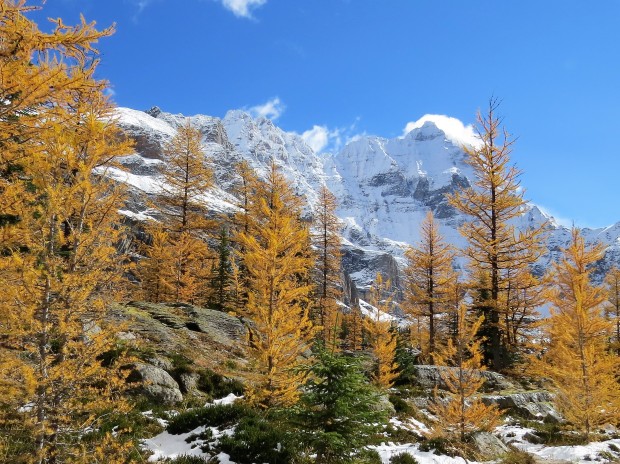 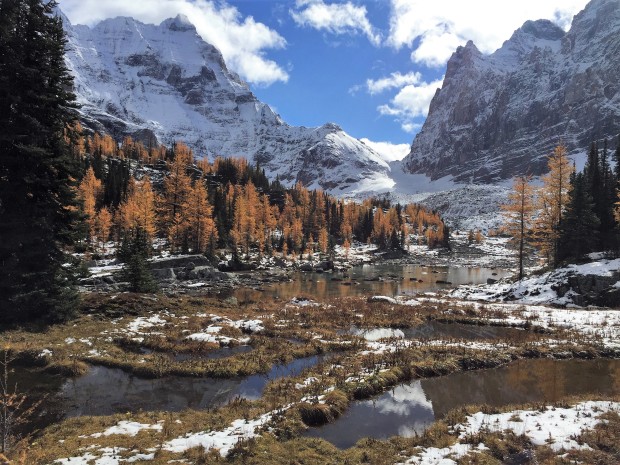 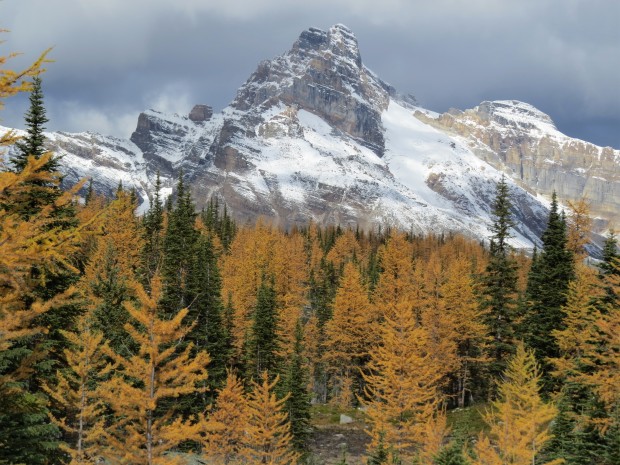 Given the big ascent we had at the start, it should’ve been no surprise that it would be reciprocated on the descent. The payback was glorious views across the valley and the stunning contrast of the green Mary Lake alongside the blue Lake O’Hara. It was an amazing route, very steep and dropping onto the top edge of a scree slope. I thanked the universe that we didn’t choose to come up that way though we passed many intrepid souls that did. 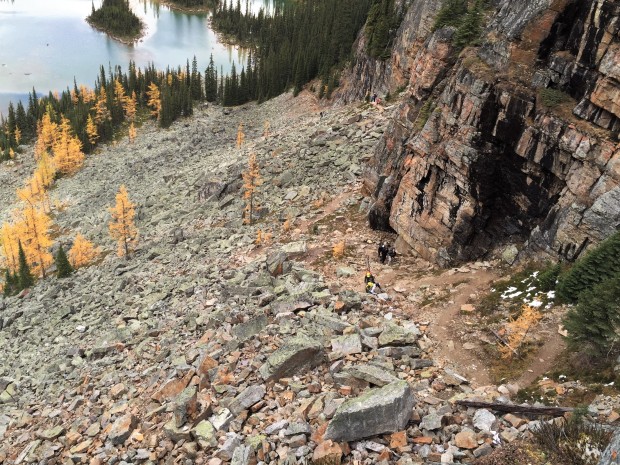 After that I was pretty happy to be back on a level with Lake O’Hara. We carried on back to our starting point, the day shelter, to wait for the bus. The shelter contains a cosy fire and refreshments and was a welcome sight for our tired bods!

This had been a memorable day. We were among the lucky few able to easily access Lake O’Hara, we had blue skies and minimal ice underfoot, the scenery was stunning and we completed a challenging hike. I can assure you that dinner and drinks back in Field at the excellent and gorgeously-named Truffle Pigs Bistro were enjoyed very much!