Return to the Rockies

A few days in the Canadian Rockies marked the middle segment of our trip. Being surrounded by mountains in that autumn-almost-winter time of year was something we had looked forward to immensely, planning a packed itinerary which would inevitably see us return to places we visited individually a decade or two ago.

From Vancouver we flew to Calgary where we collected our practical-if-dull rental (passing up the complimentary upgrade to a convertible) and stopped for the night. A short stay it was, but fun. This marked the point where we could break out the spare bag. Thanks to the tall women’s clothing shop, the western wear shop next door(!) and the massive – though massive is an understatement – Bass Pro Shop the next morning, we immediately proceeded to fill it.

We also had one of the most enjoyable meals of the trip here at none other than Applebee’s. Ever since it featured in one of the best movies of all time (of course I’m referring to Talladega Nights) Applebee’s has become a tradition of sorts on our infrequent trips to this part of the world.

Calgary appears to be growing but unemployment is really high, so I’m happy that we left having done more than our fair share for the economy. I steered our dull wheels west.

Hard to keep your eyes on the road around here!

Entering Banff National Park on the Trans-Canada Highway, we stopped to purchase our park permit which was about $80 for four days. This wasn’t required in 2004 when I arrived in Banff in a long fancy steel tube.

With no time to waste we got on the trail of Scenic Awesomeness. 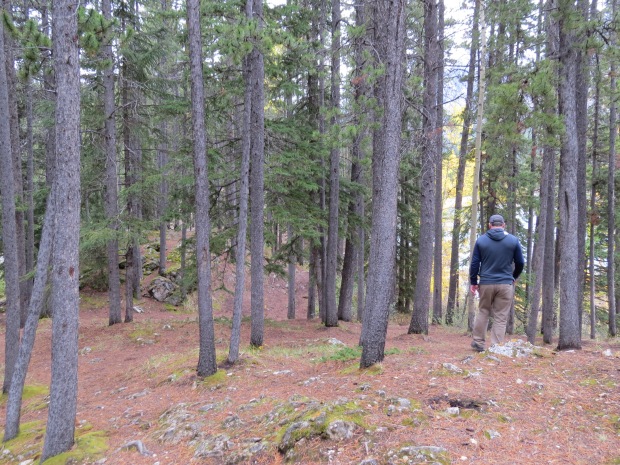 At Lake Minnewanka (pronounced ‘wonka’) looking for views – and squirrels. 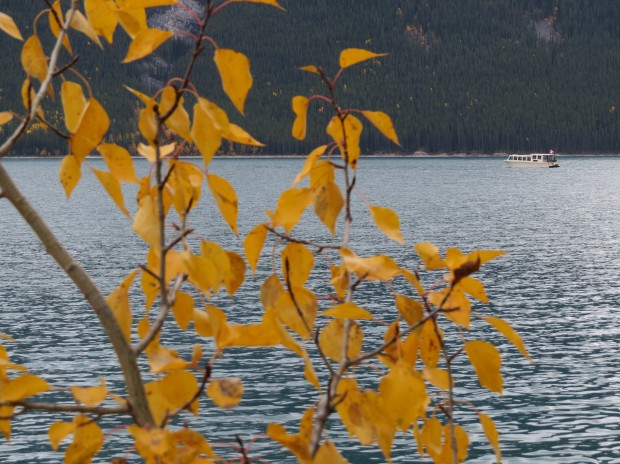 Lake cruises are offered but $60 for one hour sounded exorbitant. (Plus it was cold.)

The lake has been dammed three times and one really interesting aspect for me are the submerged remains from these times, including the small settlement of Minnewanka Landing. Being over 100 feet underwater, only scuba divers can visit it.

Pine beetles are a huge and out-of-control problem – we saw the impact in Bella Coola and here again in the Banff National Park.

Partial squirrel success! Too fast for us.

That Mt Rundle pops up everywhere and you’d be forgiven for not noticing the hoodoos rock formations at the bottom of the photo.

The hoodoos again and the Bow River which originates here in the Rockies and ultimately ends up in the Hudson Bay. 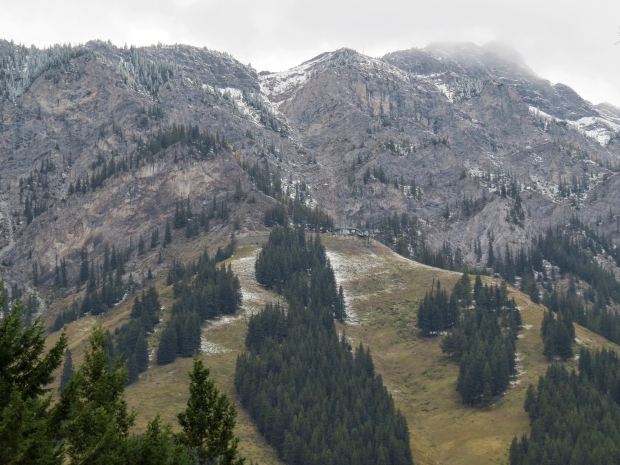 We drove up to the Mt Norquay ski field. With my novice snowboarding abilities I was pretty horrified at the terrain.

The old judging towers are a remnant of the ski jumping facility that was last used competitively in 1972 (great year that 🙂 ) and disassembled in 1990.

We were lured to the Vermilion Lakes scenic drive as its a wildlife viewing hotspot.

Although it turned out the wildlife had better things to do (ducks don’t quite cut it I’m afraid), nature delivered in other ways.

We had the obligatory walk around Banff but the town itself wasn’t a big focus.

Given the ursine theme of our trip we kept an eye out for ‘anything bear’. 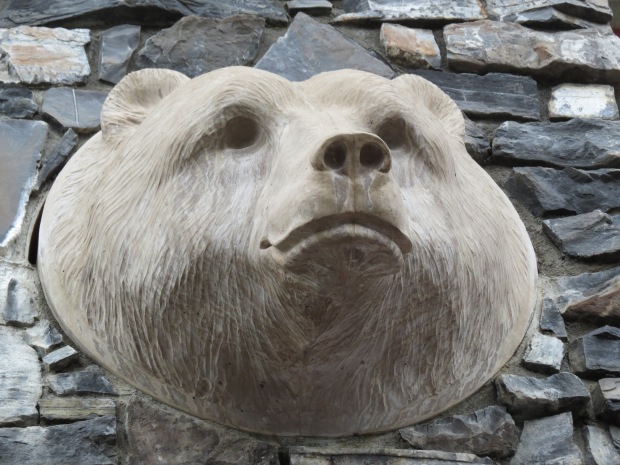 A carpark building with unusual adornments.

We were booked at Canmore for the night, half an hour away from its overpriced neighbour, back toward Calgary. This proved to be an inspired decision, Canmore has a great atmosphere and aesthetic and in the spirit of all things bear, it is home to the Grizzly Paw Brewing Company and restaurant.