We weren’t going to leave things entirely to chance. On three of our four days in Bella Coola we booked a half-day river drift bear-watching tour run by a small company based at our lodge. Absolutely the right decision: it enabled us to see grizzlies and black bears fishing and feasting on luckless salmon.

Our first tour couldn’t have started better. We were assembled on the river bank ready to go when we heard a bawling noise from the woods on the other side, followed soon after by one, two, then three bears emerging (mama and cubs).

The tour philosophy and protocols keep the welfare of the bears first and foremost. If a bear is spotted, the guides aim to stop about 100m away. Often though bears emerge at a much closer range and if we’re on the water the guide will either deploy the anchor, or depending on the circumstances, jump out into the (shallow) river to steady the boat.

In the example of this first encounter, we stayed on the riverbank in a group quietly observing and once the bears started moving away we got into the boats.

The launch point was at the boat ramp adjacent to the bear viewing platform we visited on our first evening, with the end point being at a campground about 4km downstream (the campground being closed due to grizzly activity)

As an aside, why the interest in bears? On my North America travels in 2004 I went up to Churchill to see polar bears and I think it gradually took hold from there. Polar bears are the largest species with grizzlies third and black bears fourth.

Word must’ve gotten out that we were in town and wanting a good show as we saw numerous other bears on this first tour.

We were excited to see this guy. Bent Ear (he’s a bit battle scarred) is probably the most famous bear in the area, and possibly also the biggest. Other bears tend to steer clear. 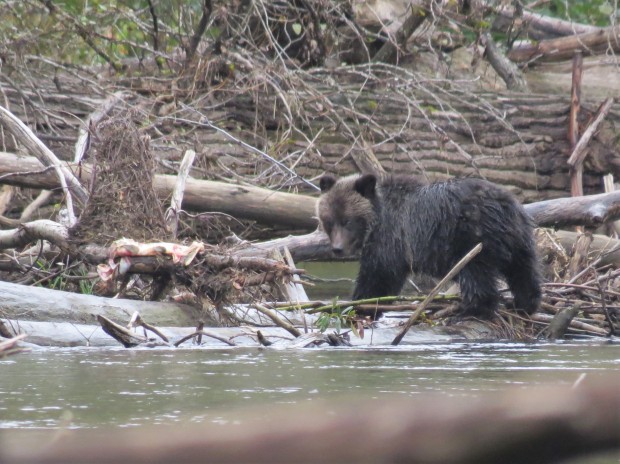 Just before our drift finished we came across a cinnamon black bear and her adorable cub.

While sightings can’t be guaranteed, we always saw at least one bear while on the river and because they tend to fish and feed in one spot and then move on to another (unless they head off for a snooze), on several occasions we had bears about 10-20m away. Given the know-how of our guides we never felt at risk. The next day was a good example with a single encounter, however it was Bent Ear and a case of quality over quantity!

There was a controversial incident – the guide in the red jacket had Bent Ear appear from nowhere and just had to keep the boat still until he moved on. The other boat pictured was steered by a rookie guide who ignored distance protocols to travel downriver past the bear and find a spot for his clients to watch.

There were tense times in our boats too which were a short ways up-river; most of our fellow tour-goers were from a photography club with a very small minority simply wanting the shots and challenging the guide about why they couldn’t get as close as these other boats. I couldn’t believe what I was hearing. However, when Bent Ear eventually moved on he came into close range for us – guess who shut up then!

When there weren’t bears to see, there was everything else. Drift boats provided an incredibly peaceful experience. We were surrounded by mountains, breathtakingly sheer on one side, and trees in which eagles and ospreys were often perched. Many times we were in silence with just the sound of the boat or oars moving through water. 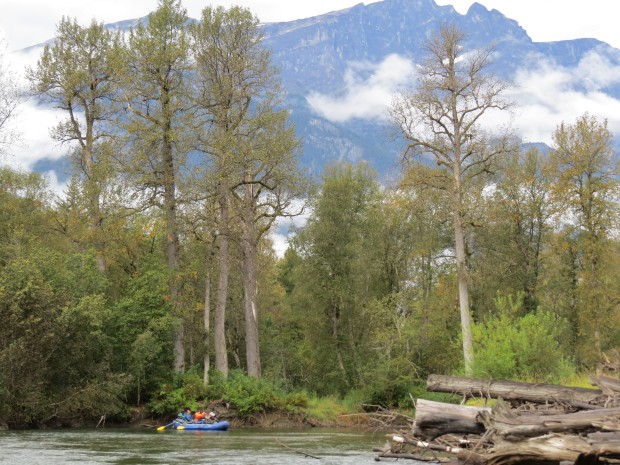 Silence would sometimes be interrupted by the sound of salmon jumping. There were huge numbers of them (various kinds) either swimming, jumping, writhing around spawning, or dead – either spawned out (having fulfilled their life’s ambition!) or partly devoured and left on the water’s edge or a log. The bears never had to try hard to snag one.

Our final drift tour was another bonanza much like the first day. While Bent Ear was nowhere to be seen, we did find the older grizzly cubs and the wee black cub again. It was interesting observing the siblings – our guide surmised that mama will probably give them the boot after the upcoming winter, one cub was noticeably more independent whereas the other was sticking close to mum and seemed more reliant, bawling if one of them had food that he wanted (don’t know if it was a he but I’m putting it out there). 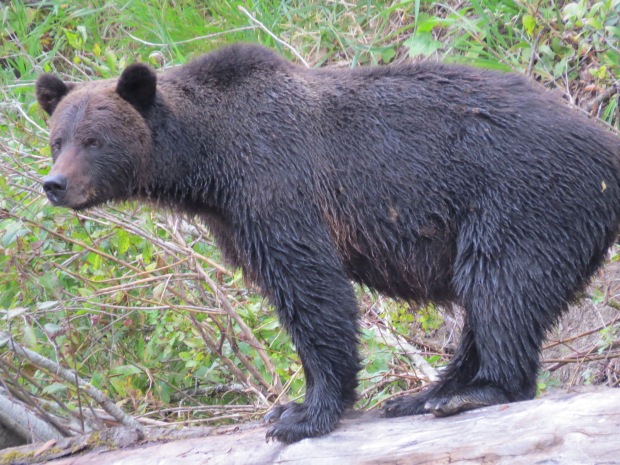 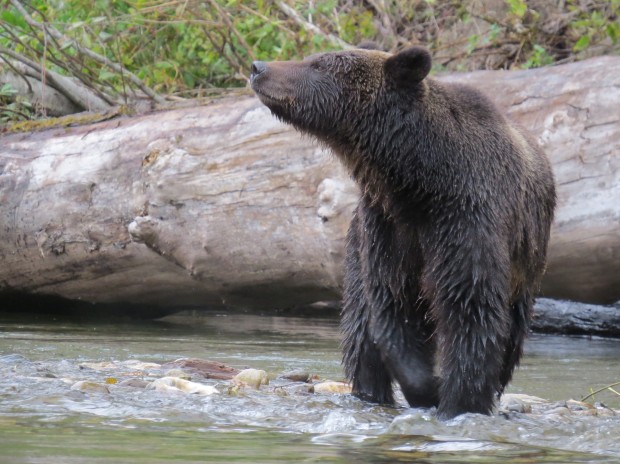 There’s an interesting theory that sows with cubs are starting to associate being near these boat tours as a form of protection against male aggressors. Boars are known to kill cubs as it puts the sow back into heat sooner; otherwise the average time between litters is about four years.

Aside from a few random and fleeting sightings while driving, the viewing platform was our other main method of trying to see bears. We had mixed success here and it involved making the 85km round journey again later in the day.

Contrast one: No bears (Mike’s photo – me reading!)

On our last visit, mama grizzly and her cubs stopped by to say bye.

We really enjoyed Bella Coola in general (other non-bear posts to follow) but especially for what it delivered on the bear front. I can’t recommend highly enough the viewing tours in river drift boats. If it’s something you’re contemplating, look up Kynoch Adventures and book a trip to BC, BC.