It’s September, seemingly our month of choice for offshore excursions and that would be true again this year with Mike and I currently in Canada. After a gnarly build-up juggling work and health issues we nevertheless arrived in Vancouver (bless those 13 hour flights) to kick off our almost three week adventure.

Feeling groggy from the overnight flight we were plunged straight into a sunny afternoon and opted to get to our downtown hotel the simplest way possible. We’ve been here separately before, me in 2004 when I stayed in a hostel. Happy to be somewhere more comfortable and private this time!

We had a short outing in what was left of the day, to Gastown via a large sports store which, with Mike navigating, was no accident. Combined with the souvenir stores in Gastown, it would have been all too easy to max out luggage space on day one.

After dinner we trudged across to the western side of the peninsula. Weary though I was by this stage, I was instantly (if fleetingly) energised by the awesome skies! 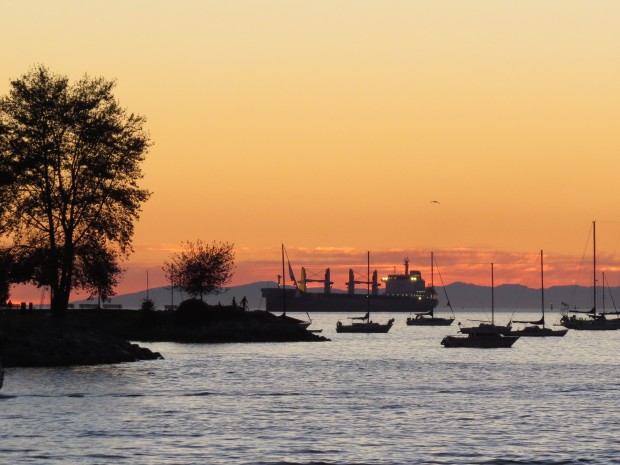 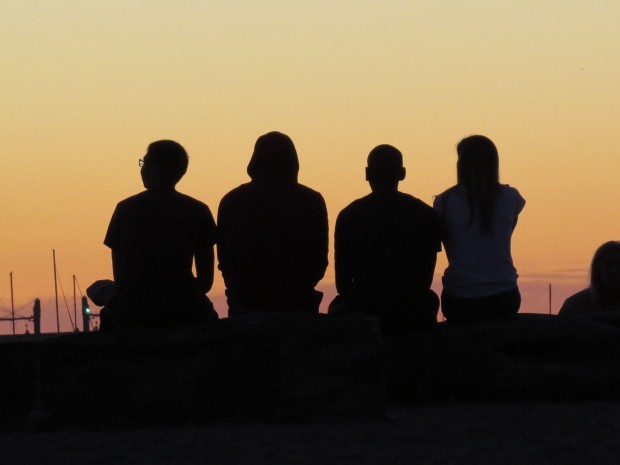 The beautiful weather continued the next day and we took advantage of the hotel’s complimentary retro bikes. Vancouver is quite the eco city with a big focus on recycling (three different sorting bins in our room) and a large network of dedicated cycle lanes. It’s the existence of the latter that made me not scream ‘noooooo’ to Mike’s suggestion that we in fact do a cycle tour. And I’m so glad we did, it was brilliant. Starting with the Canada Place and Coal Harbour areas we carried on to and around Stanley Park. 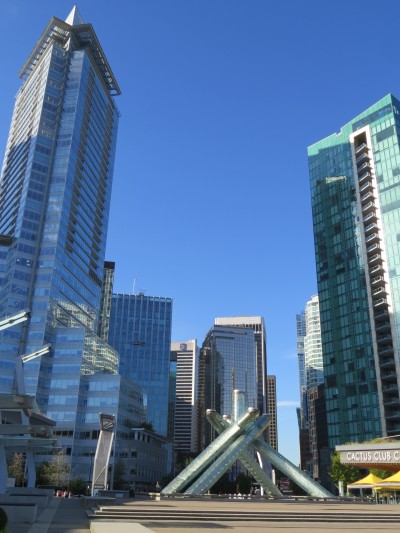 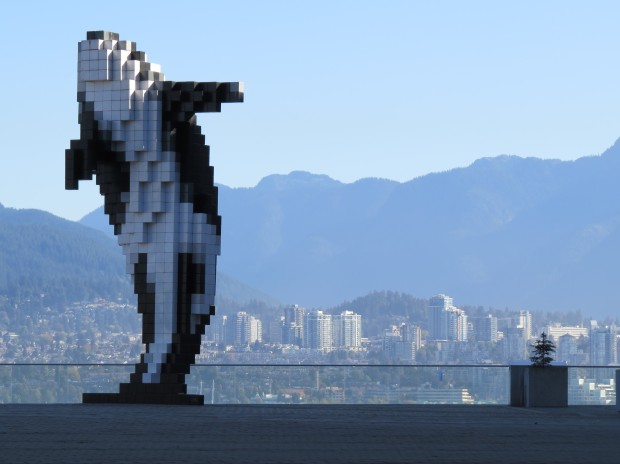 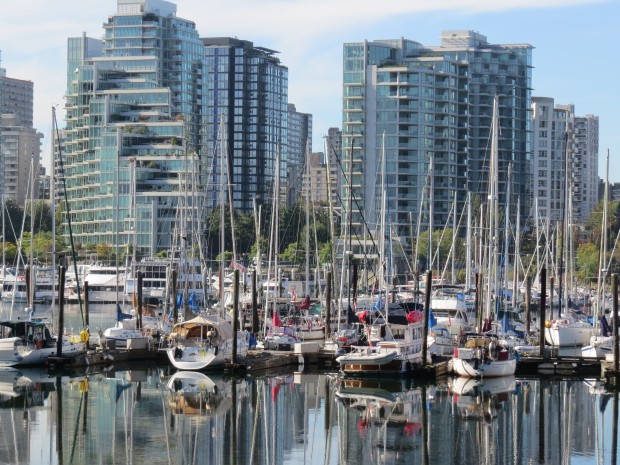 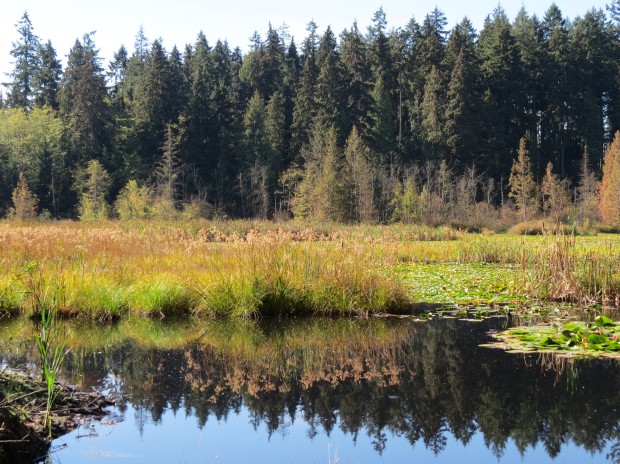 I walked around the park on my previous visit on a dreary grey sort of day. Got round it a bit quicker this time. 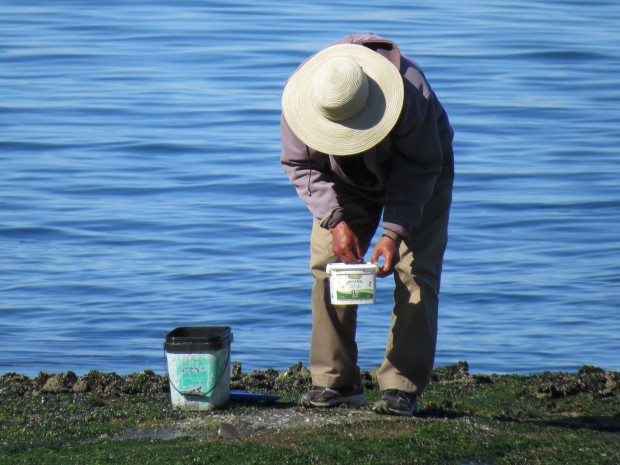 The route was flat, save for a mild hill on the home stretch to the hotel. Low energy levels courtesy of anemia rendered this well beyond me and there may have been a minor meltdown; I hope this improves by the time alpine hikes roll into our itinerary!

Bikes returned, we transited a short distance to Rogers Arena, home venue of the Vancouver Canucks hockey team. We were here too early to coincide with any games so we booked onto an arena tour. 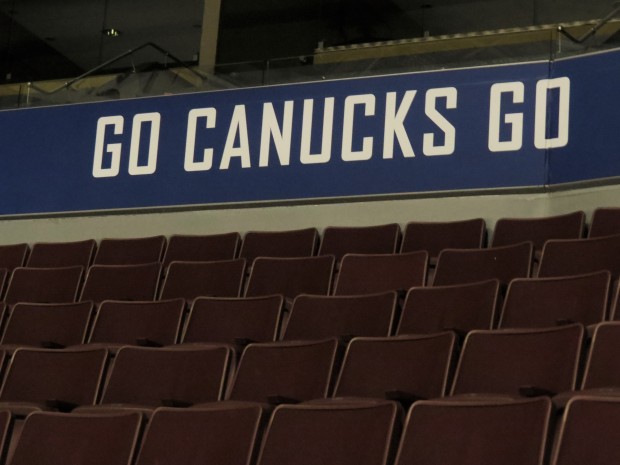 At basically the highest viewing spot inside the stadium which can be yours for a massive price tag. Kinda wasted on me as I couldn’t really handle looking down to the rink.

One of the few rinks that have a genuine organ for ‘those’ game tunes. Among other things in this happening wee box is the ‘goal buzzer’ which Mike was fixated on getting a close up look at.

Down in the player benches.

Really interesting and great value at $12. As consolation for not being able to get to the locker rooms, Mike won one of the pucks used that morning in a Canucks practice session.

We took a water taxi up to Granville Island to browse the excellent market and dinky shops. Great opportunity too for food and drink. Mike’s only culinary goal of the trip is poutine but he would strike out here. 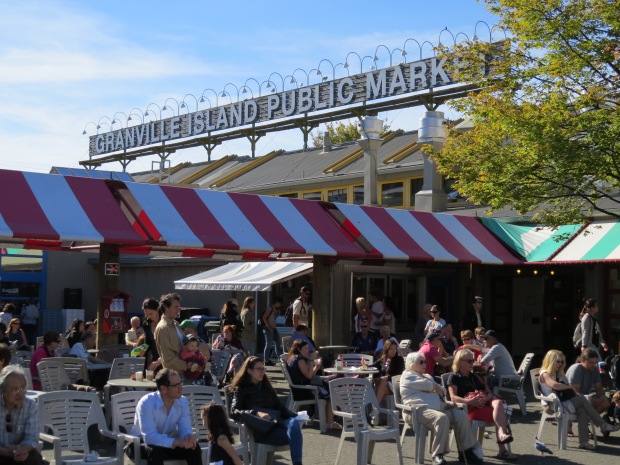 A water taxi back across False Creek propelled us toward the downtown shops. Of particular interest to me (space constraints be damned) was a tall clothing shop, essentially non-existent in NZ. What time did I get there? 5.30pm. What time did it close? Sigh.

Granville Street entertainment district had a gritty feel, not helped by closed-down premises attracting throngs of homeless out front (big homeless problem here from what we saw). The striking neon signs are from a couple of remaining historic theatre venues.

We carried on to Yaletown, the regenerated ex-warehouse district where Mike had plotted a course to a brewery restaurant. Great spot and a perfect way to round out our short stay. Tomorrow we were heading north for the main reason of our trip: bears!