In their footsteps (2): Journey to Hamburg

Poland Day 26. In 1876, members of the Fabich family embarked on the long and hellish journey from their home to start a new life in New Zealand. While it’s not possible to emulate the sea voyage (thankfully), I could at least mimic the train journey beforehand that got them to the port city of Hamburg.

Their local ‘city’, Starogard Gdański, was connected to the rail network in 1871 as part of the Prussian Eastern Railway and it was from there that they set off. The train station is still very original looking and the evening before I went to see it as I wouldn’t be able to see much in the morning. 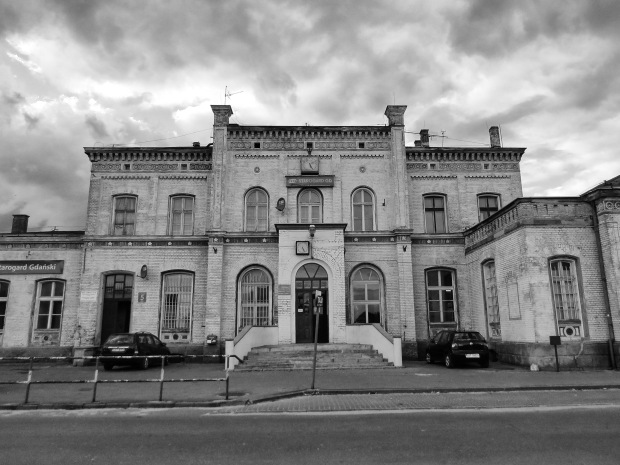 I wasn’t able to find out the exact path of travel in 1876 but figured that if it was different, I’d at least get a flavour of the distance and terrain. Following my usual philosophy, I chose a route with the fewest changes (three) and booked the tickets online before I left NZ. The day before I was due to take the trip I learned that the pioneer route went via Berlin, like my modern-day route was taking me. However, in researching this post I have now found out what the 1876 route would most likely have been and that I could have replicated most of this had I chosen the option with nine changes! 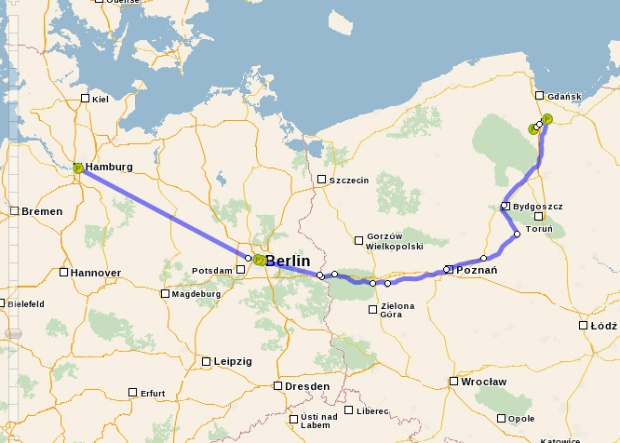 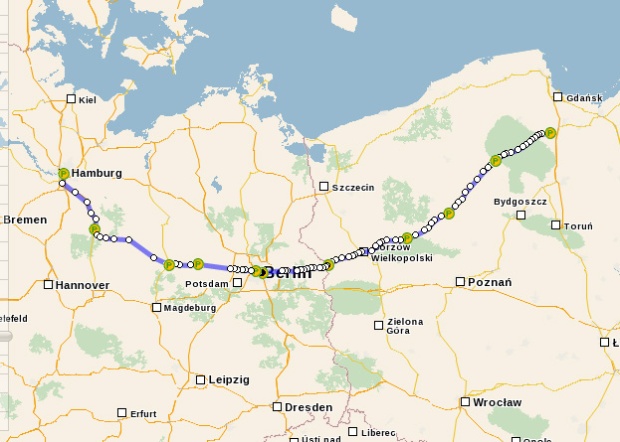 Where I arguably should have gone (but look at all those stops!). This would’ve taken me on what was most probably the route my ancestors took to Berlin, though wouldn’t have replicated what seems to have been the original Berlin-Hamburg line

…But never mind. On my big train day I needed to get away early and wasn’t happy when a room of shrieking girls woke me at 00:49 as I couldn’t get back to sleep for a couple of hours. I confess to not being very quiet when I left before 6am. Equipped with a packed lunch organised from the hotel, I trekked off to the station in darkness.

First was a short jump to Tczew, in the opposite direction which was a bit counter-intuitive. In hindsight I should’ve studied the route more closely and investigated further.

In Tczew I had plenty of time to stretch my legs and make an early start on my lunch bag before commencing the longest stage, to Berlin. 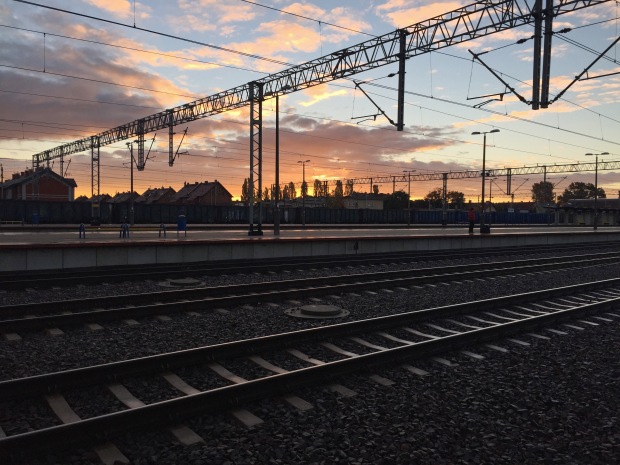 So what prompted my ancestors to take this journey into the unknown? For over a century, until the end of WW1, the sovereign state of Poland as we know it today didn’t exist. The Fabiches lived in what was part of the Prussian territories where the ethnic population was oppressed and harshly discriminated against. Males also faced conscription into the Prussian army. The future looked very bleak and ultimately caused the family to geographically splinter. Of the seven family groups, four-and-a-half of them left. Eighteen people came to NZ, a few less than that went to the US. This was a very common story with 3.6 million Poles leaving their homeland between 1870 and 1914.

From Tczew we zipped through foggy rural landscapes at a respectable top speed of 160kph. On my various bus and train rides through Poland I saw hundreds of farms and thousands of paddocks, but very few livestock. Most land seem devoted to crops. Today I counted about 20 cows and a lot of haystacks so I guess more were lurking. 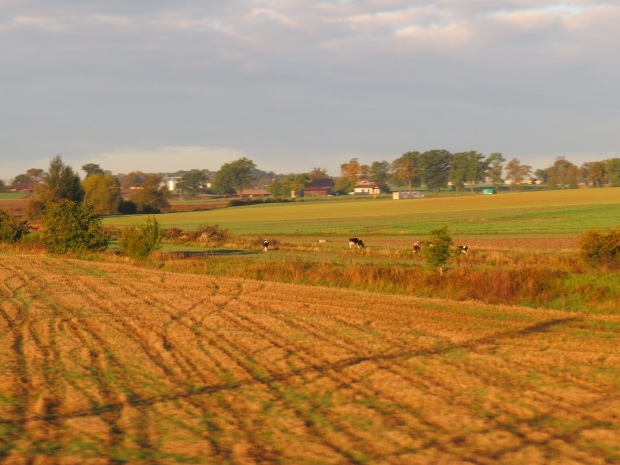 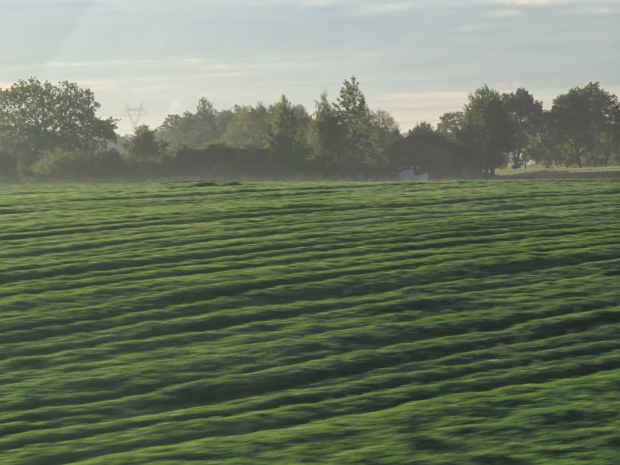 Triangular haystacks are where it’s at around here 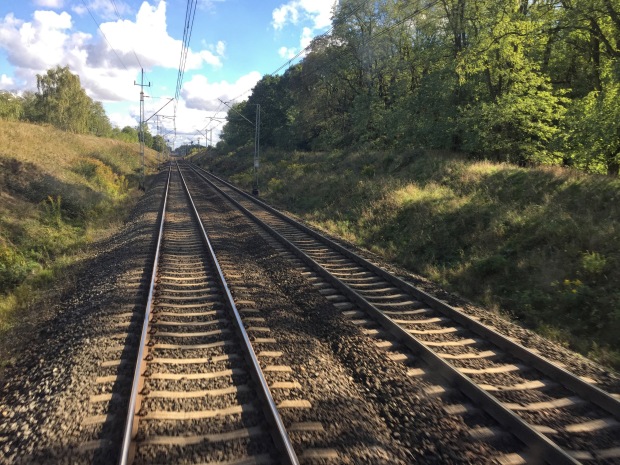 At exactly midday we crossed into Germany. Guten tag!

The Odra River marks the border

From here to Berlin at least I was on the same actual trail as my ancestors. Through here the rural views continued though were often hidden behind woods. Most tree-lined paddocks seemed to have a small hut on stilts positioned in the corner which I took to be hunting boxes. Crops took a futuristic flavour with solar farms dotting the rail corridor.

We pulled into the Berlin East station, Ostbahnhof, where I needed to get fairly promptly over to the main station, Hauptbahnhof. Not the most intuitive thing to solve for a novice and there was a slow queue at the customer service desk, but I managed to get the help I needed and got on my way. 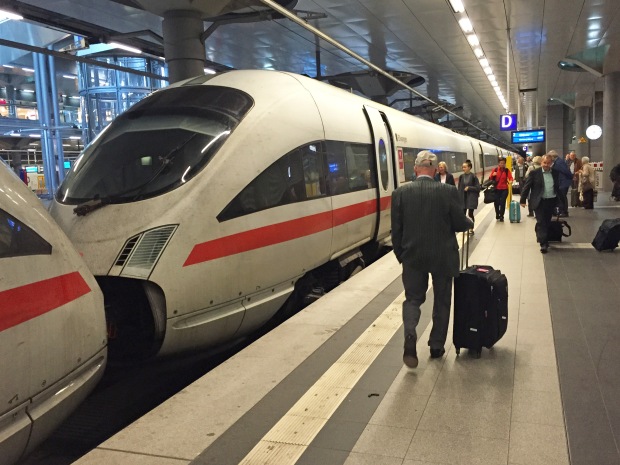 Hamburg is roughly 300km from Berlin and in stark contrast to 1876, the top speed of 200kph got me there in under two hours. I stepped out into a station unlike any I’d been to before: the platforms were the lower centrepiece and were surrounded by viewing platforms and shops. And it was a MADHOUSE. 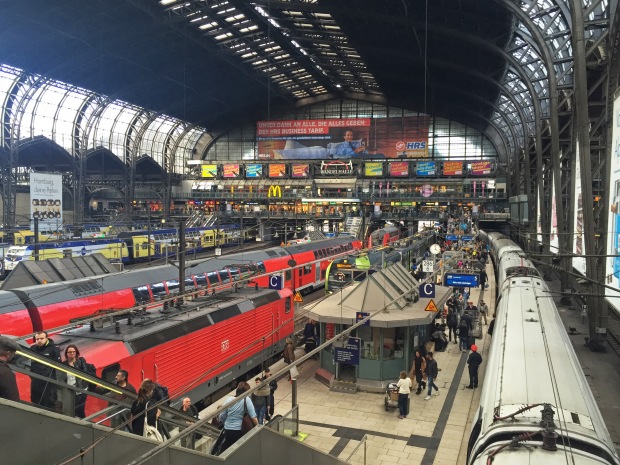 This journey probably took days to complete 139 years ago; I did it in under 10 hours (if I’d taken the other route it would’ve been closer to 12). Once in Hamburg, the Fabiches would probably have stayed in emigration barracks until their ship, the Fritz Reuter, left. I would try and find out a bit more about this tomorrow.

For now though I set out in search of my hotel. In a kind of parallel to my ancestors escaping their homeland, I walked past groups of refugees escaping theirs.

Tags: 2015, family history, photos, polish settlers to NZ, travel
From: Germany, Poland, Poland '15
← In their footsteps (1): The villages
Hamburg from the water →
2 Comments Post a comment