In their footsteps (1): The villages 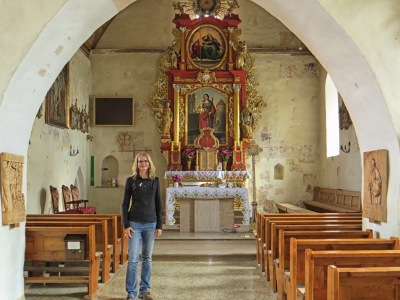 Poland Day 25. Given the south-to-north trajectory of my trip, and given my Polish ancestors came from the north, it worked out that my last full day in Poland would be spent visiting some of the villages they’d lived in.

To help achieve this I’d booked a guide a few months before – Margaret, who I’d spent a day with the previous week. I wouldn’t be returning to Gdańsk so on what started out as yet another blue sky day I checked out and waited for the car to arrive.

We began with a repeat visit to Pelplin. This wasn’t part of the original plan, but I’d ordered a few official records after the research day and we needed to pick them up. This took longer than I thought but it provided an opportunity to visit the parish church. 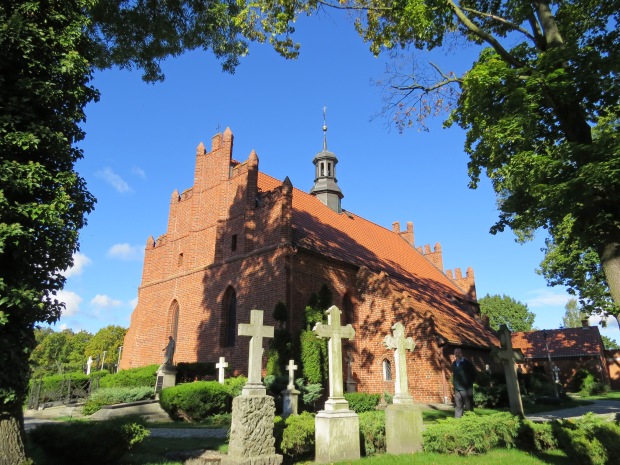 While it’s possible that family sacraments did occur here, since it is believed that one branch of the family settled in the area, we don’t yet have records to confirm this. I did however find the grave of someone in the extended family.

I saw memorials to Pope John Paul II in most places I went to. On the outskirts of Pelplin is a hill and field where he led holy mass in June 1999

Not far away is Bielawki where family belonging to my great-great-great uncle Anton Fabich lived. Of the eight surviving children of our main ancestors, we think Anton was the only son to remain in Poland. About 3-400 people live in Bielawki today and presumably it was less back then. Smaller villages didn’t usually have their own church and therefore cemetery so we had a quick look for any other building that appeared historical. There wasn’t much of that but I did see other points of interest.

I saw plenty of roadside shrines in my travels but don’t think I’ve yet posted a photo. This one was outside a home for the disabled run by nuns 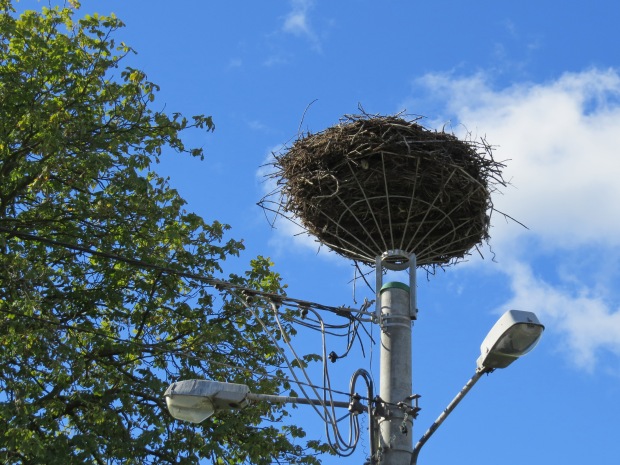 I wouldn’t have noticed this had it not been pointed out: a huge nest belong to the white stork. They resort to telegraph poles if they can’t find a suitable nesting place elsewhere. To mitigate the electrocution risk, platforms have been installed at the top of poles (by Poles 🙂 ). Every autumn the storks flap off to warmer climes hence this nest is empty

Margaret directed us to the large nearby town of Starogard Gdański as it has a good regional museum and gift shop. There are no records of family having lived here and apart from when they began their journey to leave Poland, I’ve wondered whether their lives saw any need to travel to the local ‘big smoke’. At the time family emigrated, SG had a population of about 6,000; it’s 8x that these days.

The Museum of Kociewie in Starogard Gdański is located in what was the north-west corner of the 14th century city walls. Starogard means ‘old city’ in the old regional language and Gdański was tacked on as a differentiator 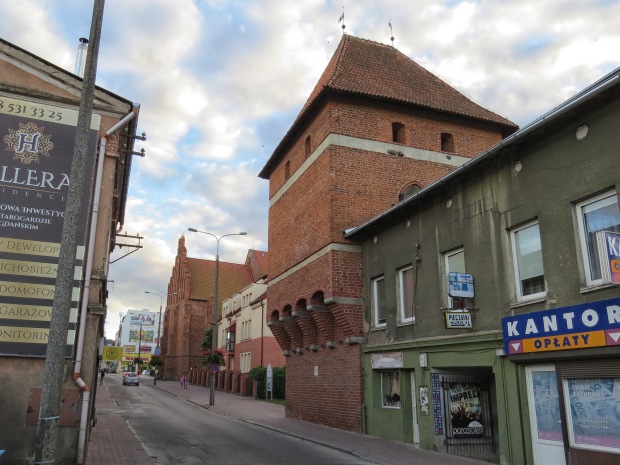 The Gdańsk Gate Tower (the gate part was cut off some time ago but you can almost envisage it being there), part of the museum

We had a lovely impromptu meeting with Zbigniew Potocki who manages the historical exhibitions and who was happy to help out with our genealogical quest. Margaret was on the phone teeing up a potential appointment for later in the day

One valuable bit of information gleaned was that Pan Potocki referred to the emigration route being from Starogard Gdański to Berlin to Hamburg. This was the first confirmation I’d heard of the route and was the journey I was booked to take the next day.

The gift shop lured me in and while there we also met the Museum Director. He too was interested in the family chart I was trucking around with and extended an offer to help further via email

Next we went to Linowiec where a couple of branches of the family lived, including that of the elusive Anton. Unsure how many people live here now but it seems quite small. 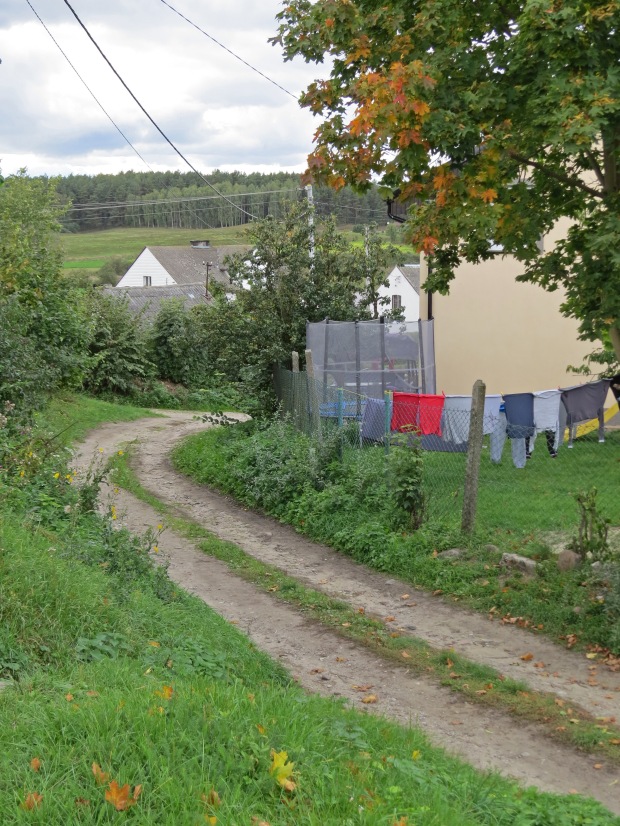 One thing was becoming clear: the villages don’t seem to have retained the dwellings of a century or more ago. In some areas I imagine it would be to do with attrition through conflict, in other cases I guess the structures may fail to stand the test of time or disappear for pragmatic reasons.

We do not know any locations where family dwellings were. Being able to sight actual places (regardless of what’s there today) would have been fantastic. Failing that, an historical look and feel would have provided an additional connection with my forebears – a time bridge of sorts – and the absence of this was a bit disappointing. Nevertheless, these were their lands and it was an accomplishment to take a fleeting if vague walk in their footsteps.

A short drive away was the village of Bączek where four of the children were born between 1824-1831 (Josephina, Johann, Anton and Stepfan who sadly didn’t make it to his second birthday). My great-great grandfather was still several years away from making his appearance. Today Bączek has a population of about 500. 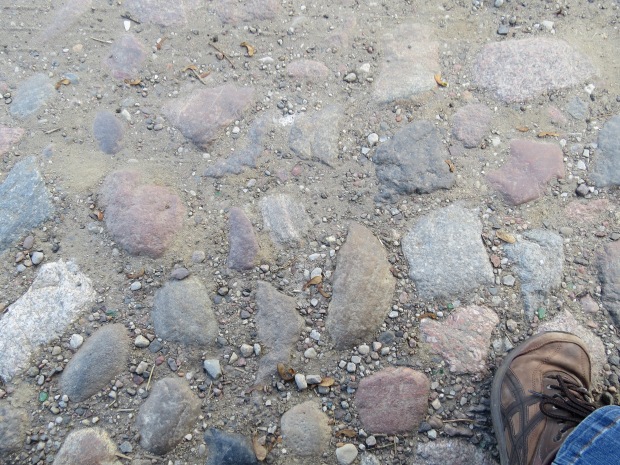 Cobblestoned backroad to the neighbouring village 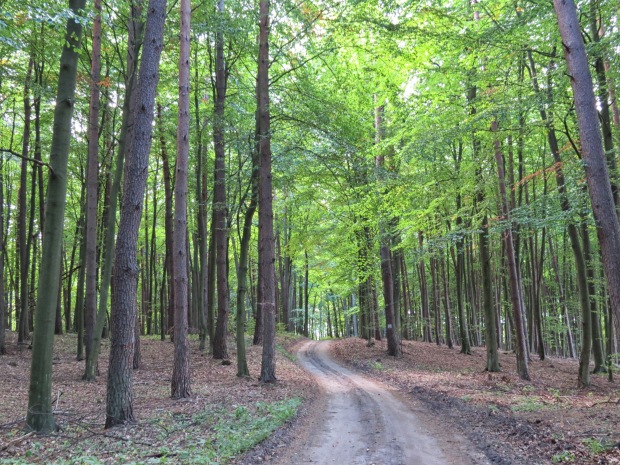 The family lived in Krąg for a short time before they moved to Bączek and was where the second child, Francis, was born in 1821. He slightly simplified what has become a big family tree by dying in his 20s with no wife or children. Mum hasn’t yet been able to track down where they were living before that for the birth of the first child, Barbara.

Down another cobblestone road we found the old railway station and station house, now private residences. The line was decommissioned about 25 years ago. The railway came to town long after family had left but it was still fascinating to find these historical traces

Next up was the main stop of the day at nearby Kokoszkowy – which is quite a nice sounding name but translates to “hen’s place”!

The region is peppered with forestry. Not here but on the other side of Kokoszkowy is the Szpęgawskiego Forest where Nazis executed 5-7,000 people

Today about 1,400 people live here so probably it’s always been a relatively large village. It’s the base of the local parish, the focal point being the ~700 year old church St Barbara’s. This was of special interest to my visit being where the last four children were baptised: my g-g grandfather Joseph Fabich in 1837 and his siblings Anna, Simon and Matthias. In time it witnessed multiple marriages and baptisms of the next generation. 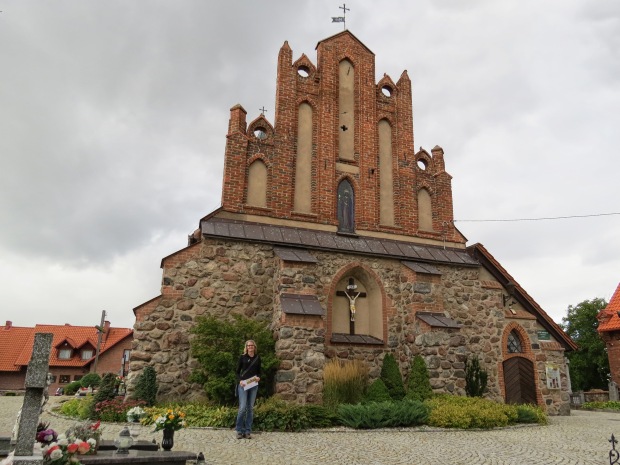 There were sad events too, such as the traumatic time in 1873 when Catherina, first wife of Joseph, and their two youngest children, died in the cholera epidemic. Joseph moved on out of necessity (presumably!) and remarried the same year.

Kokoszkowy has two cemeteries, the old one surrounds the church. It’s not very big and a walkabout revealed very little that was actually very old. It seems that if families don’t stay in the area to visit or (financially?) maintain graves, the plots will be reissued 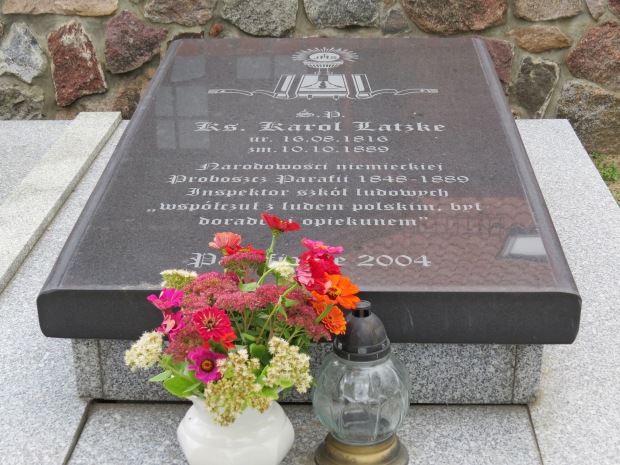 The age of the church was particularly apparent when we went inside.

The only thing mum asked me to bring back (though she ended up with a lot more!) was rosary beads dipped in holy water at St Barbara’s

Margaret had organised something else that added another dimension to my time here.

We met with the parish rector, Father Marek Błażejczyk. A busy man, he was nonetheless very helpful and provided resources that will be useful on the research front, as well as a lovely picture of the church that I gave to mum

Father Błażejczyk will also be giving mention to my great-great grandfather and family at mass today (18 Oct) at 6pm in Poland, which will be 5am NZ time tomorrow. Mum has said she’ll be getting up!

Kiwis over here on genealogical missions aren’t uncommon by any means and the Father had met with two NZ women just the month before. He has also been to NZ himself. 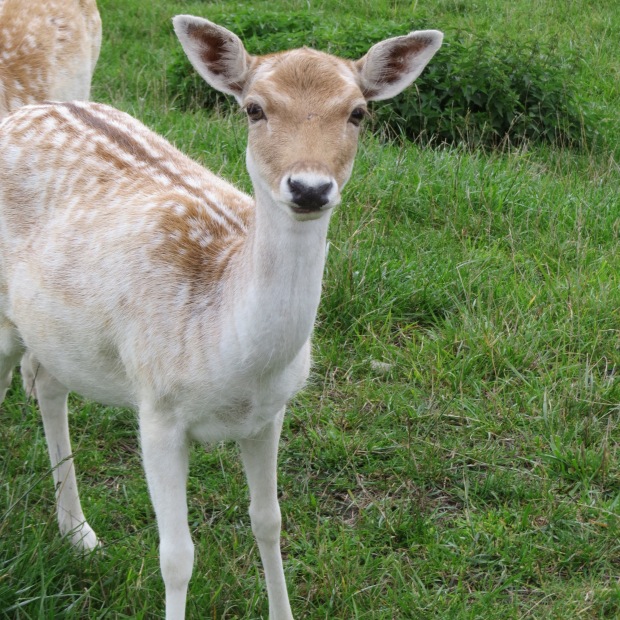 We returned to Starogard Gdański where I was staying the night. Given the amount that had to be fitted into the day we’d not had lunch, so Margaret and Marek stayed long enough to devour an early dinner at the hotel restaurant before returning to Gdańsk. It had been a long day and their services had been excellent.

Tempting as it was to call it quits for the day, I decided to use the last hour of daylight to see the market square since there wouldn’t be any opportunity before my 6.19am(!) train.

Another dose of Gothic architecture at St Matthew’s Church 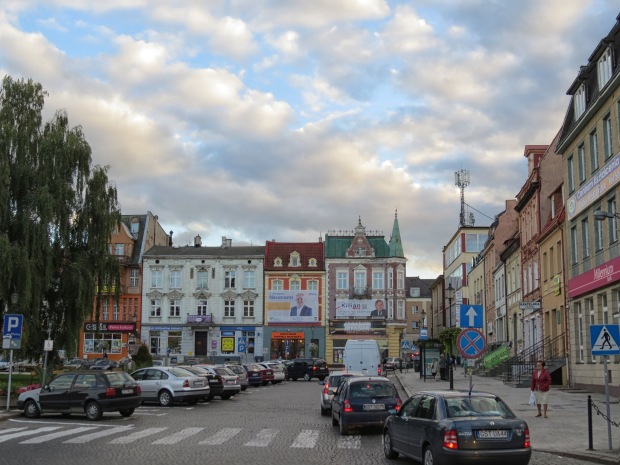 Part of the rynek

I chose the hotel for its proximity to the station and it was about a 20 minute walk to/from the rynek. Nearby is Sobieski, a vodka distillery part-owned by Bruce Willis and when I returned the sun was setting in the cloudy skies behind it.

Back at the hotel I bought a premixed drink from reception to toast the end of my time in Poland. After close to four weeks on the ground here it was almost all over. It had been a busy couple of days so I hadn’t really had time to reflect.

Back in my room I couldn’t see a bottle opener: no problem, I’d only that day bought a fridge magnet with inbuilt opener. I looked down to absent-mindedly check the label and chuckled: Sobieski.

—————————-
If anyone reads this who has information about the Fabich family in Poland, please either leave a comment below or get in touch via the About > Contact page. Thank you!