Ukraine Day 2. Going to the Chernobyl Exclusion Zone may sound like a strange thing to do. Its been a place of fascination for me for a long time, especially the ghost city of Pripyat, stemming from a passionate interest in abandoned buildings and dereliction. This must of course be balanced against the tragic story behind the zone and the dark legacy that will live on for centuries to come.

A tour is the only way that outsiders can visit the zone. It is guarded and entry requires permits and passport checks. I booked a two-day tour through CHERNOBYLwel.come which cost 280 Euros including a night’s accommodation in the zone and all meals.

Instructions were to meet at a KFC outside the main railway station at 8am – for me, a half hour walk away. I’d booked my Kyiv apartment for the night I’d be away so that I could leave the bulk of my stuff there which enabled me to travel light. Couple of hiccups: I half-rolled my ankle in the apartment building stairwell, ankle seemed OK but I managed to give myself a minor leg strain; then I struggled to find the KFC before realising just on 8am that it was still a few minutes away on the other side of the station/platforms. Gah.

I was one of seven on the tour and joined a couple from England, two guys from the US, a guy from the Netherlands and another from Slovakia. Looking after us was our guide, Tania, and driver, Olek.

The zone is a couple of hours away to the north. The roads around Kyiv aren’t too bad (seem to be a fair few cobblestone roads though, for historical reasons I guess), but beyond they get worse. This was probably exacerbated by my back seat in the minibus which seemed to have a decent amount of spring action. The two days of touring was the bumpiest two days of driving I’ve experienced. So much so, it interfered with the app I’ve been using to get my daily distance walked. We did a lot of walking, but not that much!

On the way a documentary was played which was a good distraction. I won’t recount the historical events of the disaster, other than to mention it was in 1986 so 29 years ago now. I was in 4th form at high school and don’t have a burning memory of what was clearly a major event in world history.

The journey there was another interesting lesson in Ukrainian driving. Olek was very good but I saw multiple occasions of driving over the centre line and overtaking with metres to spare. To underline the relaxed attitude to safety, I noticed that seatbelts seemed to be very much optional for those sitting up front!

We arrived in the zone which extends about 30km to the east and south, but much longer to the north and west due to wind drift (about half of it is in Belarus). Here we encountered the first checkpoint with an instruction not to photograph any of the buildings or staff. There’s another checkpoint at the 10km boundary. Radiation scans are conducted on people and vehicles at both checkpoints when exiting. 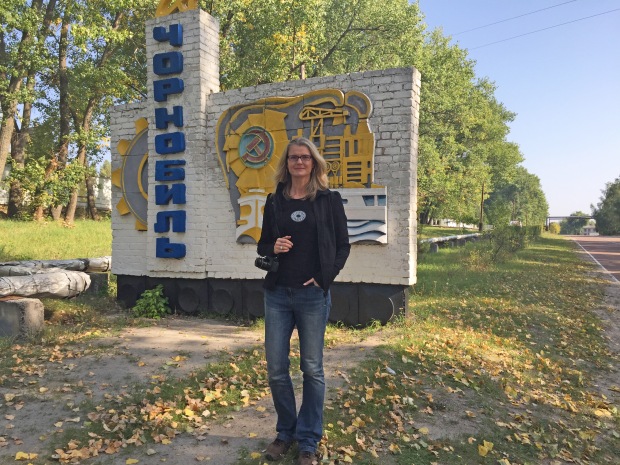 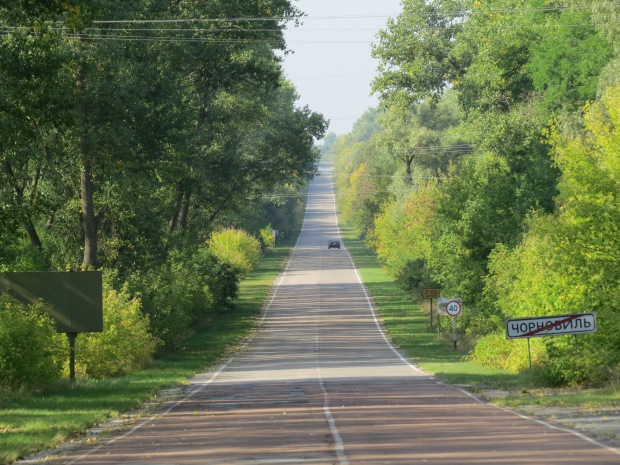 Looking back the way we came

It was a hot day, the Ukrainian summer making a comeback just for my visit. Not necessarily a good thing! The guidance for what to wear included long pants and top. I overlooked the top part and I would have heat-stroked if I’d had to wear my jacket so for most of the day I just wore a t-shirt. (Er, and jeans etc.) Given some of the places you get taken it’s inevitable you’ll brush up against foliage or something man-made at some point so covering all limbs is sensible… though Mum/Dad, I’m sure I’m fine!

We were taken to see a few memorials around the Chernobyl township (which to my surprise has origins back to the 12th century), along with a still-operating church, some local abandoned houses and what’s left of the port. 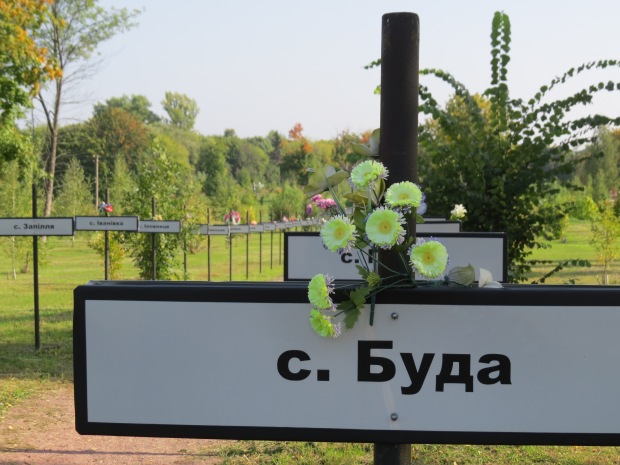 A memorial to all the towns in the Exclusion Zone

Abandoned houses in Chernobyl. Many are too unstable to enter, if in fact you can get past the trees and vines

A lot of the abandoned buildings in the zone have been trashed and picked over by looters. Most of that happened after the USSR broke up, during which time the Chernobyl zone wasn’t guarded. Windows were also broken to prevent buildup of radiation in enclosed spaces 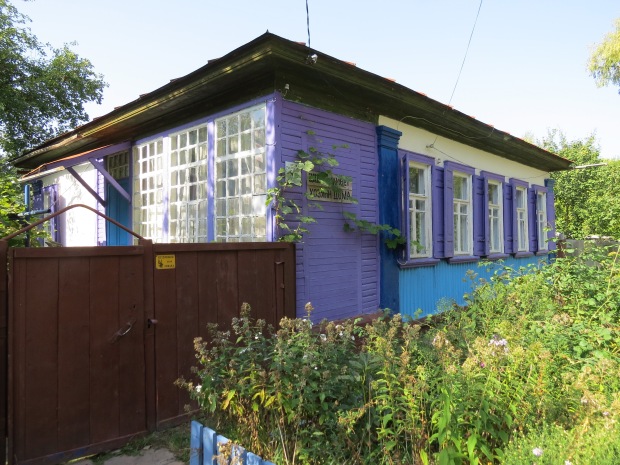 A manicured splash of colour in amongst the faded dereliction, this is the house of self-settlers – people who took it upon themselves to return to the zone a year or more after they had to evacuate. Mostly pensioners, the numbers are down to about 100. They live in the zone at their own risk 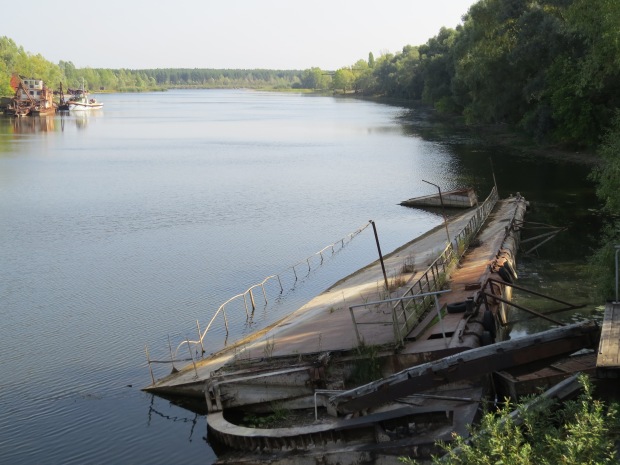 By then it was lunchtime which we had at our hotel after checking in. There are two hotels in Chernobyl town and we were at the ‘best’ meaning it has hot water and wifi. It was basic but absolutely fine and we were very well fed. Luckily I was able to get a room to myself though bathrooms are shared.

A full afternoon of activity ahead was planned.

Despite what you might think, the exclusion zone has many signs of life. About 3,000 people work here helping to manage the zone. This includes the nuclear plant even though it was ‘switched off’ in 2000 – it will take until about 2065 to clean up the site – as well as those helping to construct the new protective shelter for the reactor that blew up. 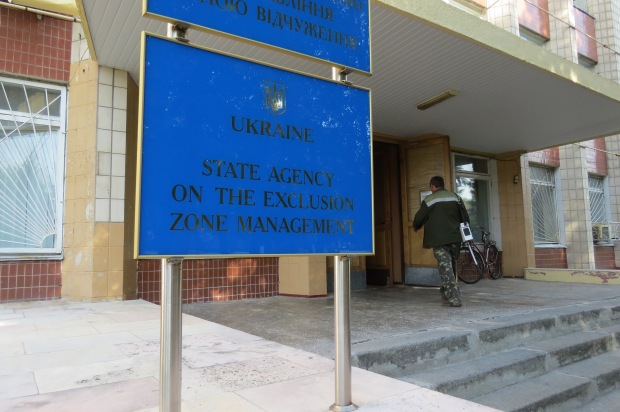 The government agency that manages the zone. Workers are civilian but typically wear camo because it’s cheap and comfortable

This was a display of robotic vehicles tried in the days following the disaster to help clear some of the radioactive debris. None worked due to the effect of radiation. The only solution was to use humans, dubbed bio-robots, and they were only permitted to work for 40 seconds at a time such was the severity of radiation exposure

In front is a Przewalski’s horse, a rare species introduced some years after the event and has thrived in the region 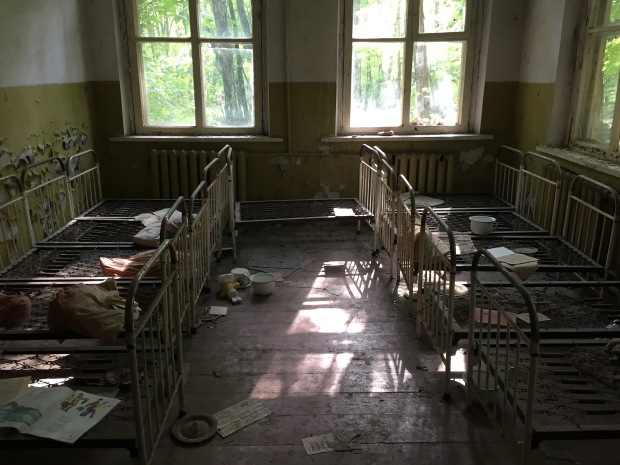 Kopachi Village was virtually entirely bulldozed and buried because the houses, being predominantly wooden, contained too much radiation (others were washed down). The sites where houses stood are now marked with radiation flags. This kindergarten is about the only building that remains 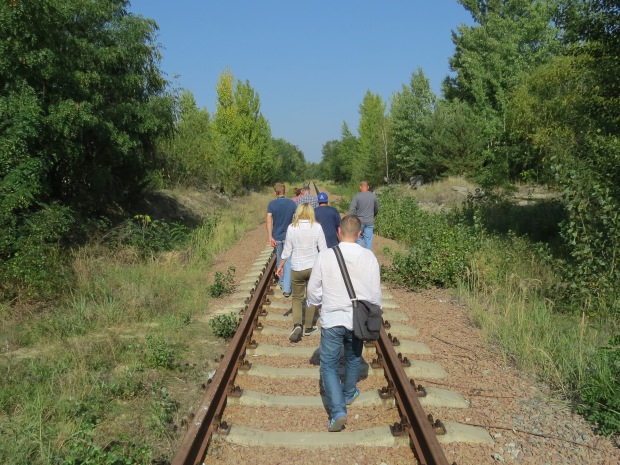 Then we visited what we could of the power plant. Here we’re walking to the partially constructed cooling towers

Cooling tower 5, never completed as the accident halted plans for further expansion of the facility 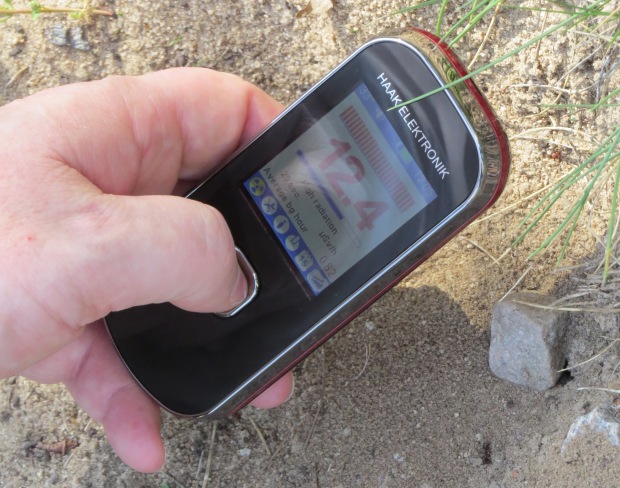 Hot spot! One of the others brought their own dosimeter and our guide of course carried one. Normal is about 1.4, on this patch of ground it was about 8 times that. Tania recommended we avoid standing on moss, being the highly absorbent substance it is, though sometimes that was impossible 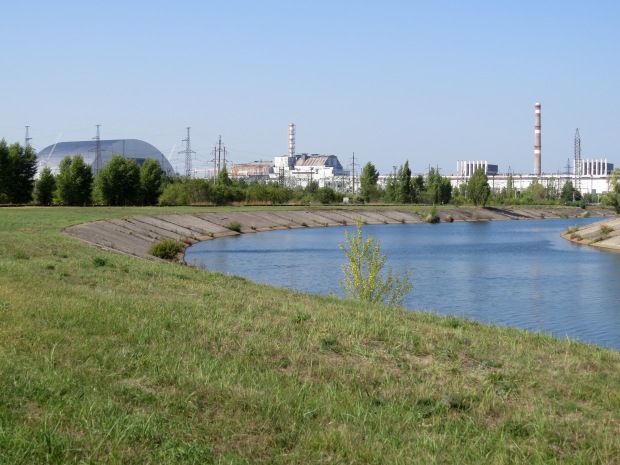 From right to left: reactors 1 and 2 (where the vertical white things are), reactors 3 and 4 (under the ‘shed’) and the barn thing is the new object shelter for reactor 4, due for completion sometime in the next couple of years when it will be ‘slid’ into position

Workers on the new object shelter… 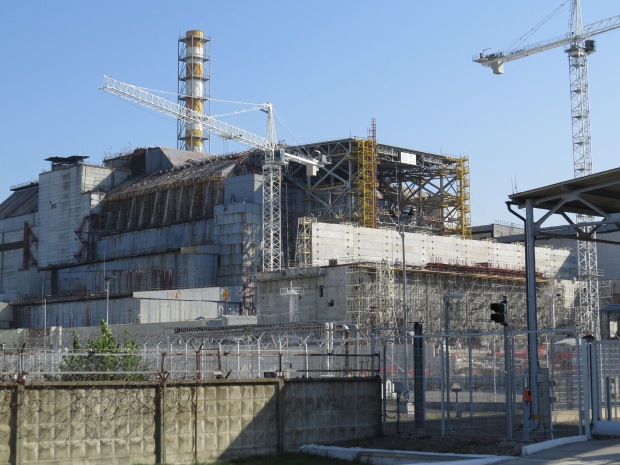 Slight change of pace: we stopped to feed some catfish, regular size and gigantors (evidently nothing to do with radiation effects)

We then went to Pripyat, surely one of the eeriest and most atmospheric places you can visit on the planet.

Site of the Red Forest, still very highly radioactive. The original forest has since gone

Road into Pripyat with ‘before’ photo

Chernobyl was intended to be the largest nuclear power plant in the world. At the time of the accident, four reactors were operating but there were plans for 12. The city of Pripyat was built to house all of the workers and when the explosion occurred it had about 50,000 residents.

The call to evacuate came late, about 36 hours after the event, at which time radiation levels were a shocking 200,000 times higher than normal. People had a short amount of time to collect essentials before the largest bus convoy on earth transported them away. Pets had to be left behind – the most heartbreaking aspect for me – and a team of marksmen later traversed the zone shooting them. They were as good as dead anyway. 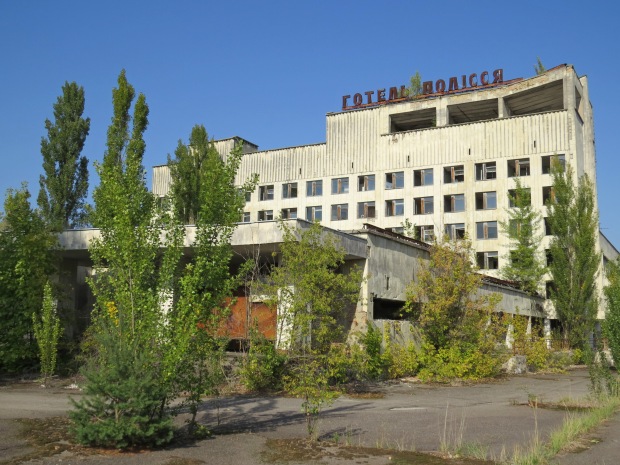 From the top floor of the hotel 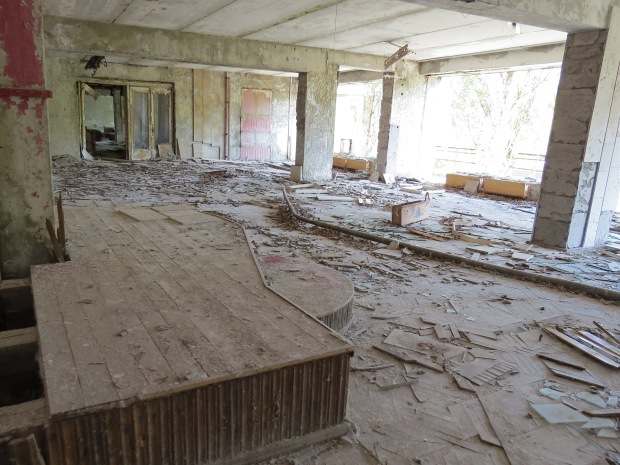 As one example of the permanent imprint left by the disaster, Tania – who would’ve been born some years after it happened – explained that at school, it was only by exception that students did not have a thyroid problem. 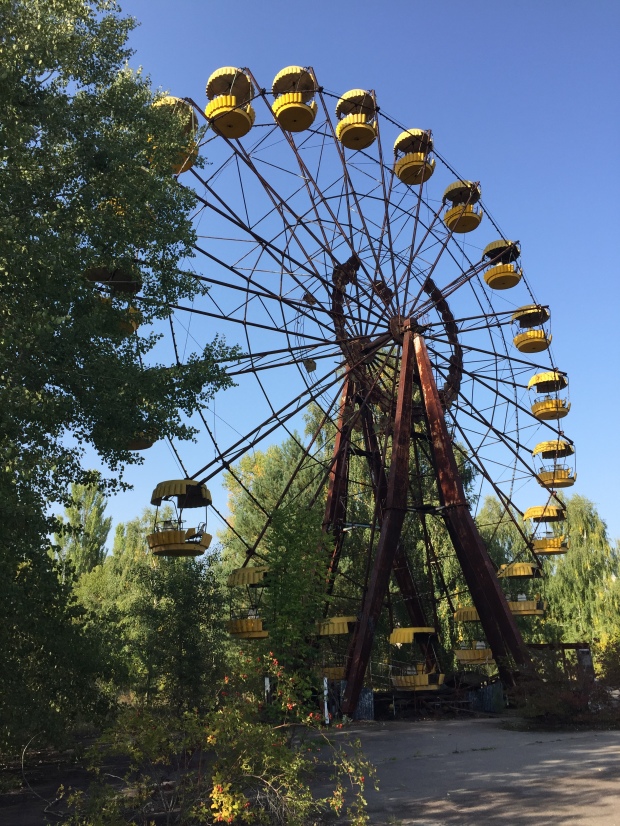 We went to the amusement park which was due to open on May Day, five days after the explosion

Officials decided to open the park early to help distract people from wondering if there was a problem, unwittingly exposing them to high levels of radiation

Pripyat is an incredible place. Heavily looted though; the buildings are trashed and what looters left behind, nature is slowly reclaiming.

Ignoring the looting, two aspects dilute the authenticity of the experience for me. Over the years various idiots have left tags and graffiti around the place; and presumably to increase photographic appeal, some scenes have been staged with props, e.g. toys, though judging by the extreme wear on them the majority would be relics from 1986. 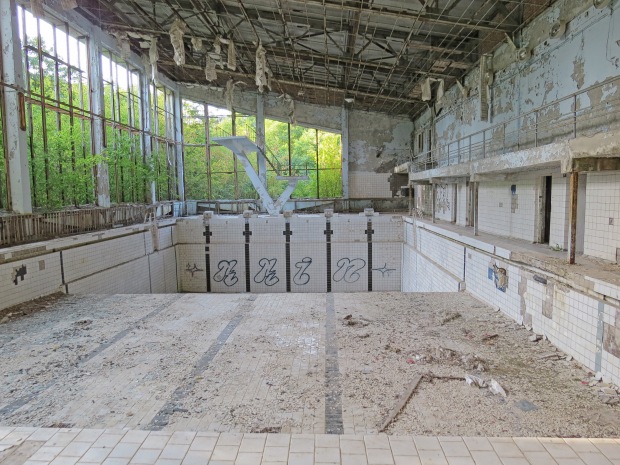 Tania took us from place to place in this city where there is no birdsong, only the crunch of broken glass underfoot, as we ventured into the buildings that are relatively safe to do so. In the last few years a rule about not entering buildings has been introduced because of the instability of some structures. But all Pripyat visitors go into buildings, to my relief, and it made my already fantastic day off the scale.

This was a school 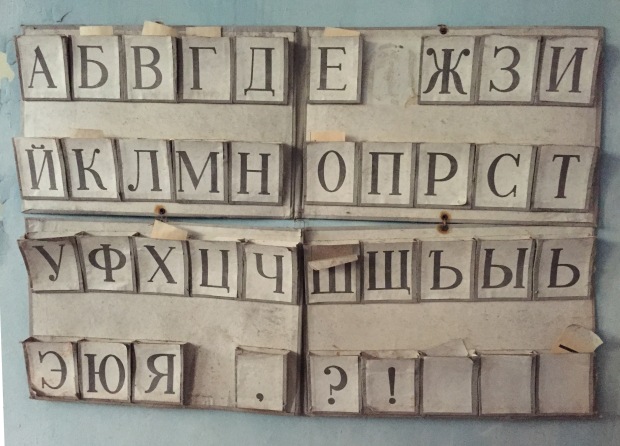 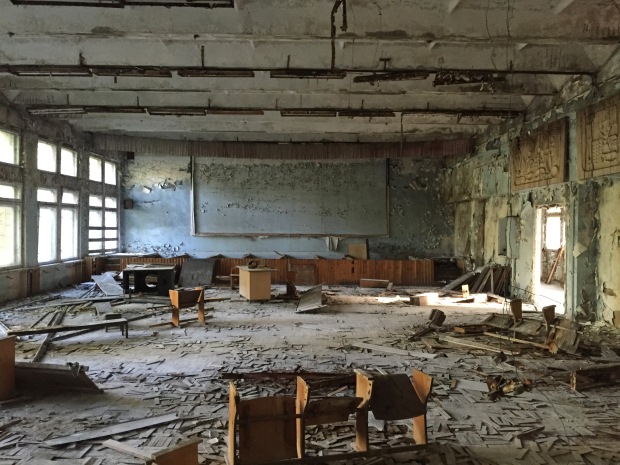 Not surprisingly I used up my camera battery so resorted to phone-only for last half hour or so. By now we were in one of the schools and I could have lingered there for longer – but we had to get back for dinner at 6pm. All meals were Ukrainian and I have to say most dishes were delicious.

I had a drink with the New Jersey gents then retired, as did all of our rather buggered group. Those who tried to go to sleep early had those plans foiled when the fire alarm went off five times. One of the hotel ladies went door to door seeing if someone was having an illegal cigarette! Happy that it was a rogue alarm rather than anything to do with radiation levels, no one evacuated. 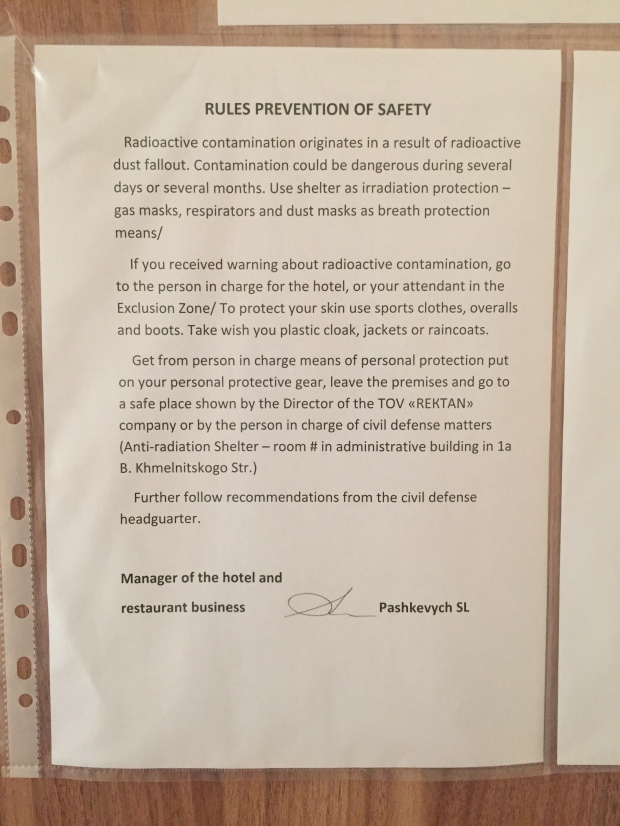 Distance walked: not sure but not 19.26km (see earlier reference to the bumpy roads!)