A quick look at Kyiv

Ukraine Day 1. A short side trip begins for what may well be the highlight of my five weeks away.

It was going to be a big day of heading into an even more foreign environment. I didn’t have all the answers at the outset but, using the elephant-eating technique, I just needed to take it gradually in bite size chunks.

After a few morsels of cold breakfast offerings I checked out. It wasn’t by any means a thorough stay in Warsaw and I may not have time to get out and about on my third visit, but I’ve had a wee taste of the place at least. I don’t love it but I certainly don’t mind it.

I sorted the bus to Chopin Airport in busy morning traffic, then checked in with the bright blue and yellow Ukraine International Airlines. It was a clear sunny day so a no brainer to go window seat for the 75 minute flight. I didn’t know whether to be amused or alarmed that people clapped the landing.

I’d organised a pick-up with the company I booked an apartment from. If my Polish is minimal, my Russian is considerably less and my Ukrainian is non-existent so this was one situation I felt inclined to take the easy option!

It was about a 40 minute drive into the city. Traffic was fast and at times lanes seemed to serve as a guideline only. At least my driver used indicators – which is to say, turned them on as he was already in the manoeuvre.

We got to my street, somewhere downtown and not far from sightseeing stuff. I opted for an apartment because of a discount via the Chernobyl tour booking and it was a great choice – big, bright, breezy and with a sauna. It wasn’t exactly sauna weather but I was determined to use it.

By the time I headed back out it was almost 3pm. First priority was finding a SIM card which took a while but got sorted thanks only to the nice English-speaking guy in the shop. Then I set off properly, without having any real agenda but feeling that I wanted to head for the river first. That then became a big loop walk. 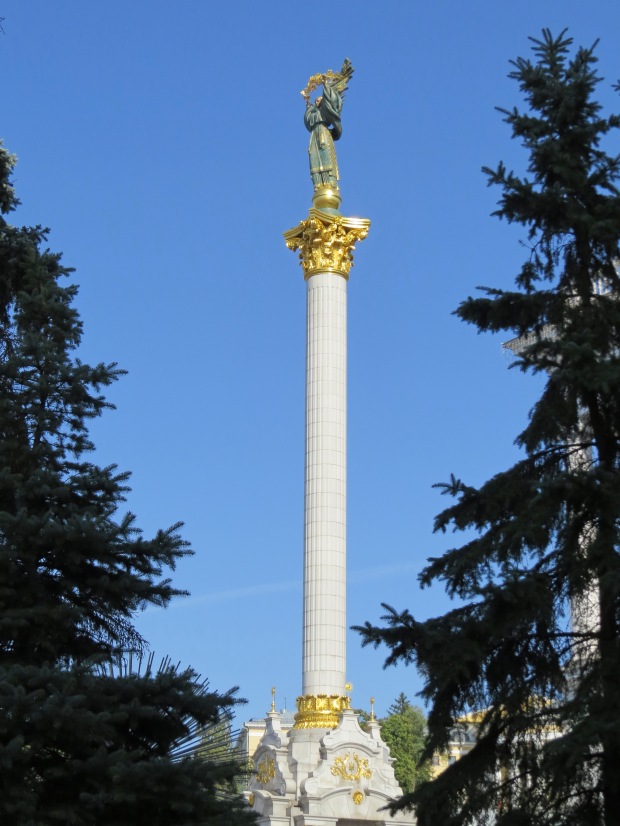 A protest march – unsure what for. It all seemed pretty civilised 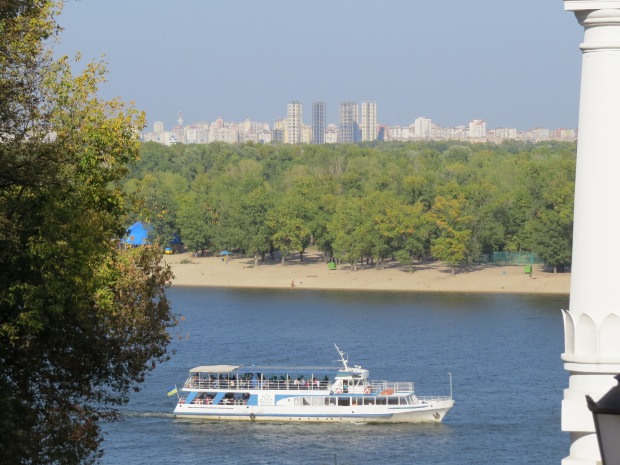 A church built on the water 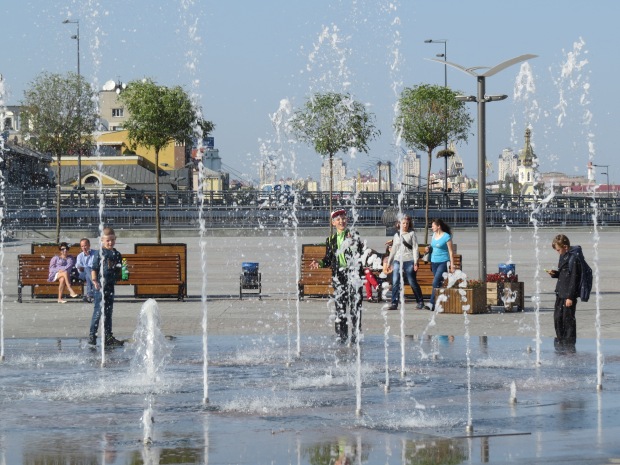 It was very tempting to race in there like a 10yo

Kyiv has a lot of underpasses for its main roads. They’re poorly lit and covered in graffiti. Still, they were safer than some crossings where cars were still going through on the green pedestrian light 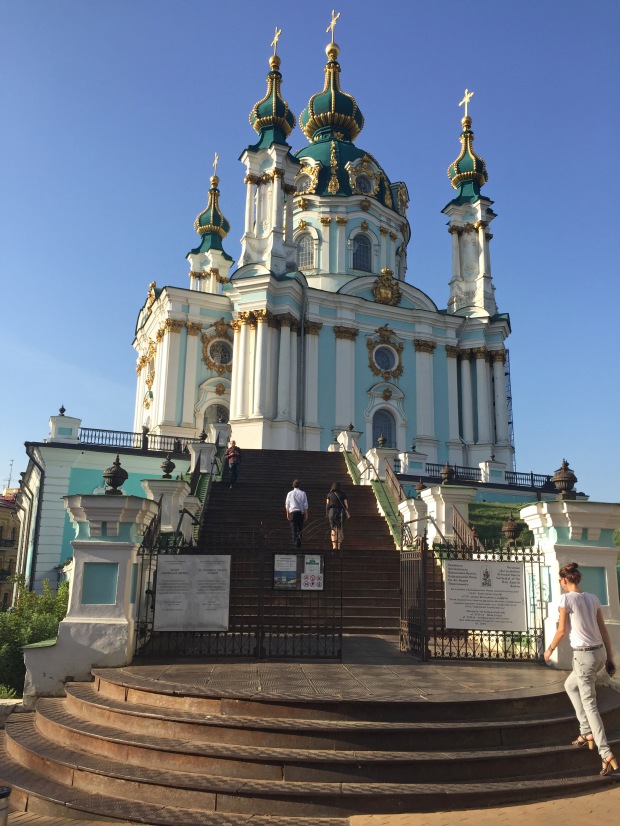 St Andrew’s Church, quite a landmark as it’s built on a steep hill. There are concerns about shifting foundations which could explain the scaffolding that was visible on the other side 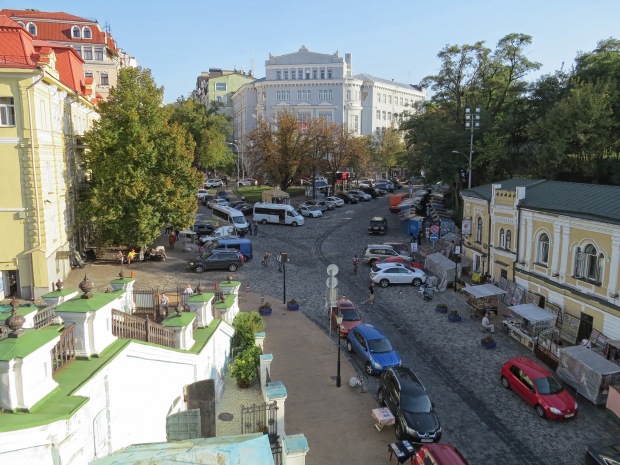 Some views from the church. Kyiv is reasonably hilly so I discovered (not that the following photos will scream this). There were market stalls all the way up the street, which I now discover to be Andriyivskyy Descent, regarded as a tourist attraction. It was a good distraction as one was walking uphill, at the risk of missing some of the buildings and architectural stuff 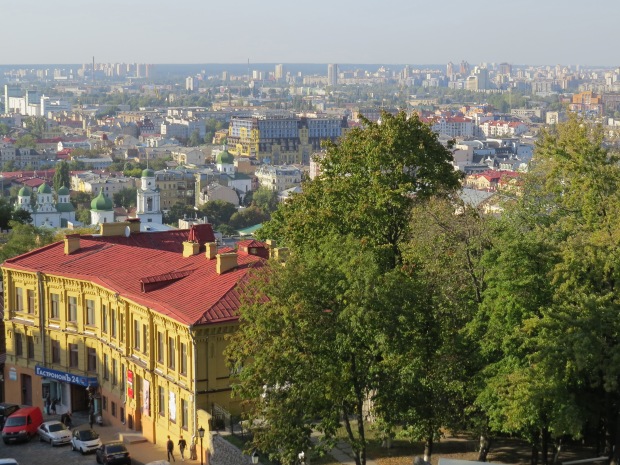 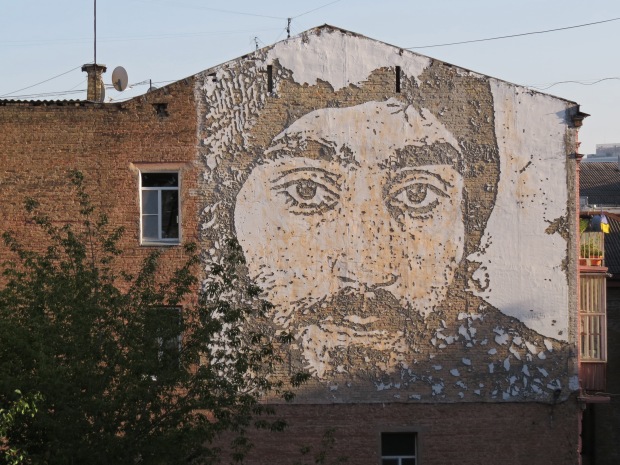 St Sophia Cathedral. I didn’t get any closer as arrived just on closing

There’s not too much you can get round in three hours and perhaps I would’ve been better served doing the hop on hop off bus thing – but I still have the must-walk mindset going on. For dinner I took the relatively easy option of TGI Fridays and returned to my pad for a sauna and to wage war with wifi signals.