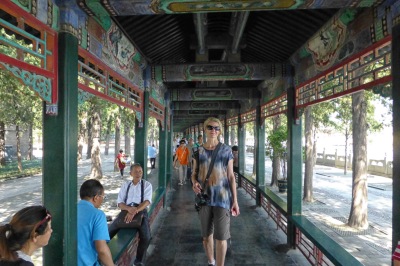 It was clear we’d be leaving some things unseen in Beijing but we’d saved a couple of biggies for the final day. Worn out feet would have to hang in there a bit longer (they could rest the next day) as we first headed to the Summer Palace – a far more sprawling location than the name suggests.

Three lines of the subway variety got us there. We entered the northern gate of the park and found ourselves at Suzhou Market Street, an abbreviated but life-size recreation of the ancient water town we’d be visiting in a couple of days’ time. 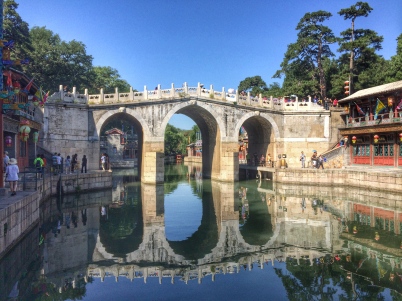 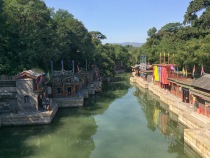 Suzhou Street opened for the Emperor and guests in the 1700s and to the public in 1990. I imagine the occasional person must have taken a tumble into the water over that time.

After our circuit there we made our way up Longevity Hill, past the signs advising to “mind the hilly road”, and through a few buildings. It was another really hot day and another relatively clear one. We could see blue sky – and views! 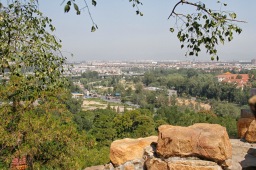 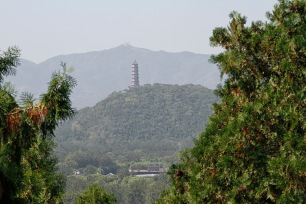 At the top we walked past a stall where a man sat producing stylised name posters in Chinese characters. Mike commissioned a couple for his boys, writing the names out in English so that they could be translated.

We followed the path down the hill toward the lake edge, past the Marble Boat (which doesn’t float and which is painted to look like marble), and bought a ticket to get across the extensive Kunming Lake to wee Nanhu Island.

The island visit was short-lived as further meandering took us to the impressive Seventeen Arch Bridge that led us back to the mainland. 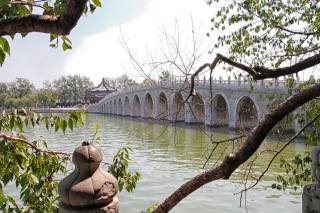 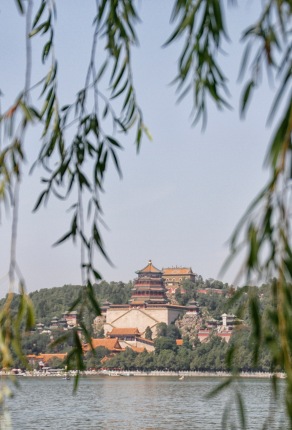 From over here Longevity Hill is a prominent landmark, particularly the octagonal Tower of Buddhist Incense – the icon of Beijing chosen for the travel book we’d been consulting. The hill was built using earth removed to create the lake. These natural features were the result of a workforce of thousands but if you didn’t know this, you’d never suspect. 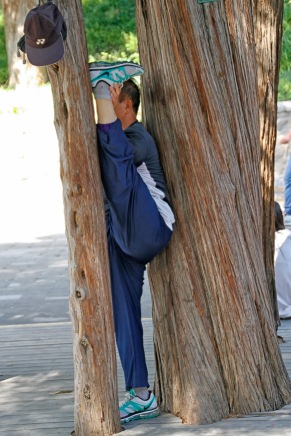 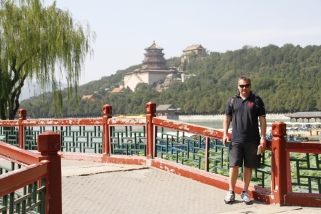 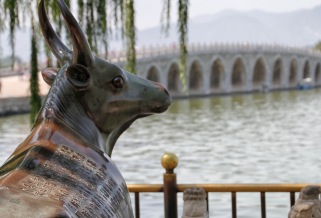 As accustomed as we were to elderly folk exercising and stretching in public, the man doing splits between two trees took things to another level!

Heading around the shoreline back toward the hill we encountered The Long Corridor. At over 700m long and painted in a beautiful colours and designs, it’s absolutely stunning. 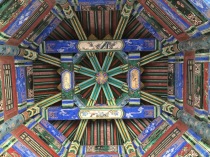 Legs were really not happy about walking uphill today but we needed to ‘conquer’ Longevity Hill again in order to track down the Tower of Buddhist Incense. 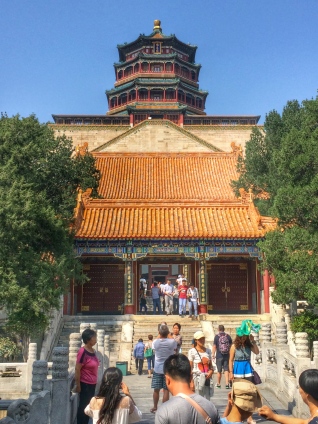 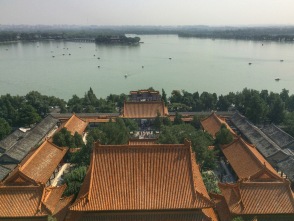 And that was it for the Summer Palace. We went back over to our side of town so that we could squeeze in a visit to the Lama Temple. We passed it on the taxi ride from the airport, a striking building tucked in behind high walls wedged alongside a busy road.

Previously an imperial palace, for the last 270 years it’s been a temple and monastery for Tibetan Buddhist monks. We blatted around fairly quickly. Photography wasn’t allowed inside the buildings and I may have practiced my icy glare at another tourist ignoring this.

Not far away is Ghost Street, a long stretch of bars and eateries nicknamed for a reason you’d probably find as anticlimactic as I did. Being the perfect place to go when one is a bit parched and hungry, it was a well-timed walk. Then we continued on foot back to our hotel, exploring a few more hutongs. 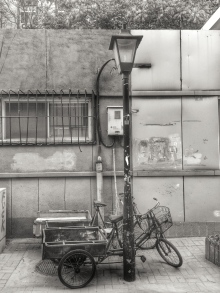 We decided to eat out properly for our final night and eyed a Thai restaurant close to home, seated upstairs and outside, above the street we’d walked along every day. My expectations were high but were duly crushed by the flavourless green curry that arrived. Shopping was more successful: personalised wax seals for us and the boys. 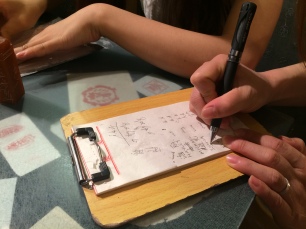 The next morning we were taking the fast train several hours south. Beijing exceeded my expectations and I would happily return another day.