China 8: A glimpse of old Peking

The area south of Tiananmen Square is a good place to get a flavour of commercial Peking/Beijing from Ming dynasty days. The modernised shopping streets carry a heritage vibe though beyond them are the best bits – old, far more original neighbourhoods.

After visiting the city wall ruins we subwayed over to where we began our Tiananmen Square visit a couple of days before.

Being a good head above everyone else is a godsend in crammed trains. Sorry to everyone at our armpit level!

From under the Arrow Tower looking to the Zhengyangmen Gate.

One of the Arrow Tower’s guardians.

Approaching the decorative gate thingy at the top of Qianmen St.

Looking back to the Arrow Tower.

Qianmen Street is an historic shopping street and was one of the many, many landmarks refurbished in the lead up to the 2008 Olympics. This was a bit controversial as many buildings were demolished. However, they used photos from the 1920s and 1930s to guide the renovation and to my untrained eye it looks very similar. The street reopened the day before the Olympics started; luckily since it was part of the marathon route.

Since visiting Beijing I’ve wondered how different parts of the city would look if not for the Olympics. Probably a lot more run down.

…but it still has trams like it first did more than 100 years ago.

Delving off down a side road

Beijing means ‘north capital’ and was named such in the Ming dynasty when there was also a ‘south capital’, Nanjing. The name Peking was an older English variation of Beijing (based on an alternative phonetic pronunciation) and still gets used today such as the Beijing International Airport code PEK and of course Peking Duck. The Beijing spelling was made official in 1949 after the People’s Republic of China came into force.

As we came to realise in the souvenir shops, Beijing has a mildly unfortunate abbreviation…

No I did not buy this t-shirt.

We found a restaurant for lunch. If we were going to experience Peking Duck, this would have been the area to do it; unfortunately we got a fail on our Beijing scorecard for this as it just didn’t organically happen into our plans on the day.

Continuing west we followed a walking tour in the Lonely Planet book and entered an older area with an abundance of character, and best of all, very few other tourists. 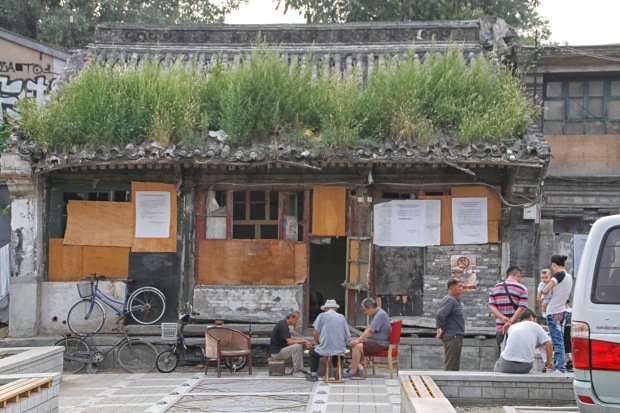 Think this was the site of an old temple

Below the air conditioning units is a slogan from China’s cultural revolution.

The artist coaxed us down the alley into her shop where we bought an arty thing for the house. I think most of our shopping on the trip was arty things. 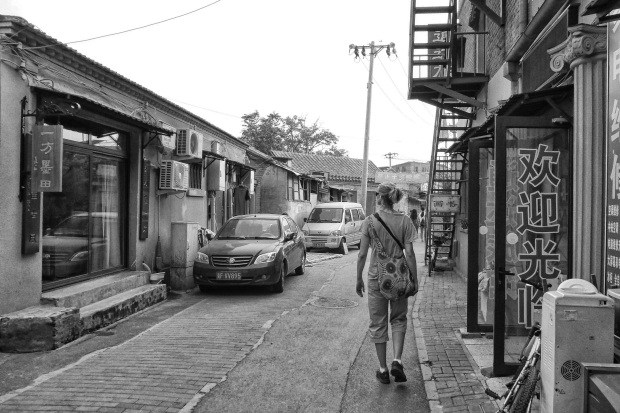 Don’t follow me, I have no idea where I’m going.

When it’s raining you probably want to swap your scooter for one of these contraptions.

Bustling with character and life. It was good too in that we were pretty much ignored.

After a lot of wandering around, jaded bodies were sent back the way they came. This was the day we went to the Tiananmen Square flag lowering ceremony and with time to kill, it was time for another refreshment stop.

It’s tough being on holiday.

This was a great spot for people watching. Shame our hot chips didn’t arrive though.

This bar was a magnet for westerners. Those of us sitting out on the street front got lots of amused (I think) stares from Chinese walking by – not entirely sure why that was!

Continuing our wanderings, I got side-tracked with silk – a famous commodity here, one of the stores dating back 120 years. I found some gorgeous outfits but the good stuff is expensive and I guess my heart wasn’t fully in it – or at least the vodka red bull wasn’t quite enough to make me fling around my credit card.

We walked down the middle of Qianmen Street and back, watching out for stealthy trams. Along here was another of the quirky things I came to associate with Beijing: vendors walking around selling gimmicky things that they continually demonstrated. There would always be several such individuals in a general area, always selling the same thing. If you go somewhere else, you’ll see lots of a different gimmicky thing. Here it was a kind of paper bird that would glide and flap around.

Later that night, after Tiananmen Square, we walked in search of The Place – a large well-to-do shopping mall. The purpose two-fold – it may have been the first time we actually high-fived each other with relief at having found toilets – and there’s a massive outdoor LED screen that kicks in with a video show every night.

That brought our day to an end – after another long one there was no way it was going to be a late night, and besides, we had to get up early for a date with a rather large wall.