China 6: Of exercise and heavenly temples

On our third day we spent an incredibly interesting couple of hours at the Temple of Heaven park watching morning exercise and recreation rituals and, as you might guess, seeing temple-y things.

By now subway veterans, we managed to exit ourselves at the station beside the eastern gate. Another ticket transaction later and we were in. The park is a very popular place and this was peak visiting time on Sunday. 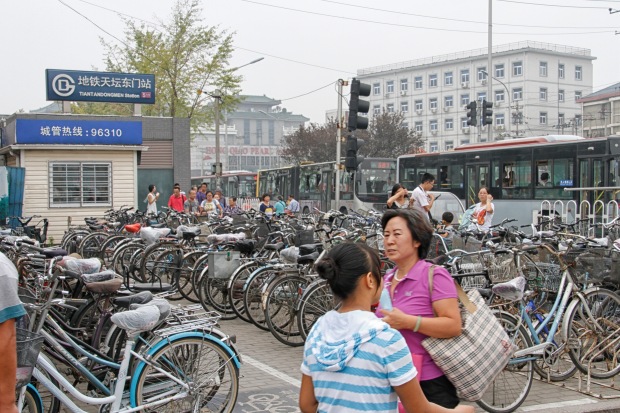 Bicycle park next to the subway station. 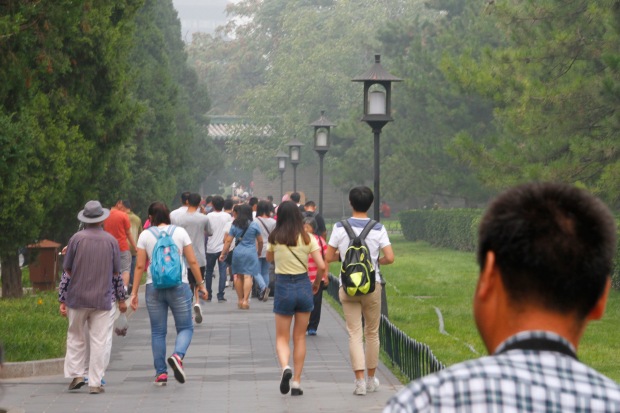 Inside the Temple of Heaven park. Busy morning. 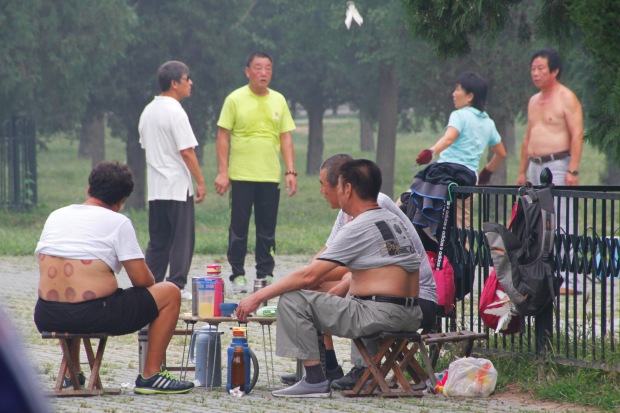 The conversion of one’s t-shirt into a crop-top is a popular method of cooling off among the middle-aged male population. Spot the man who’s had cupping therapy,

It didn’t take us long to find the large outdoors gym area which was heaving with activity. Young and old alike were working out and putting us very much to shame. 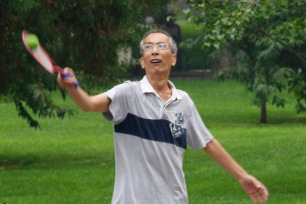 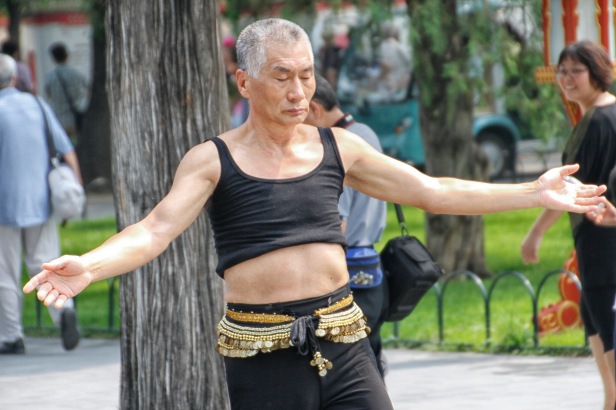 This was a fascinating place to people watch – I was blown away by the number of elderly exercising here. We found other smaller setups of gym equipment on our walking travels through Beijing residential neighbourhoods.

We continued walking and it seemed that all over this end of the park, groups (and a few individuals) were busy with choreographed routines.

And while some exercised, others were actively engaged finding a marriage partner for their child.

The marriage market in full swing.

It was a very green space, though smog again lurked in the air. 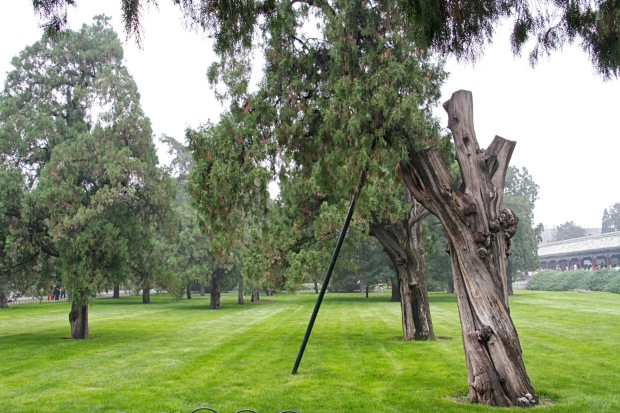 The cypress trees here can be several hundred years old and many are supported by poles.

We wandered up the Long Corridor with its intricately painted roof, past chess matches and group sing-songs, toward the first temple-y thing. 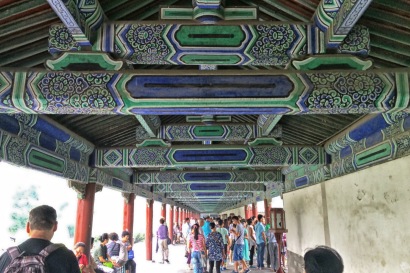 Within the park there are several religious buildings and spaces – apparently the finest examples of Ming dynasty architecture – and these are collectively the Temple of Heaven. The main structures, more altars than temples, are laid out in a north-south line.

Emperors used to visit here to pray for bountiful harvests. One of Beijing’s icons is this, the Hall of Prayer for Good Harvests. 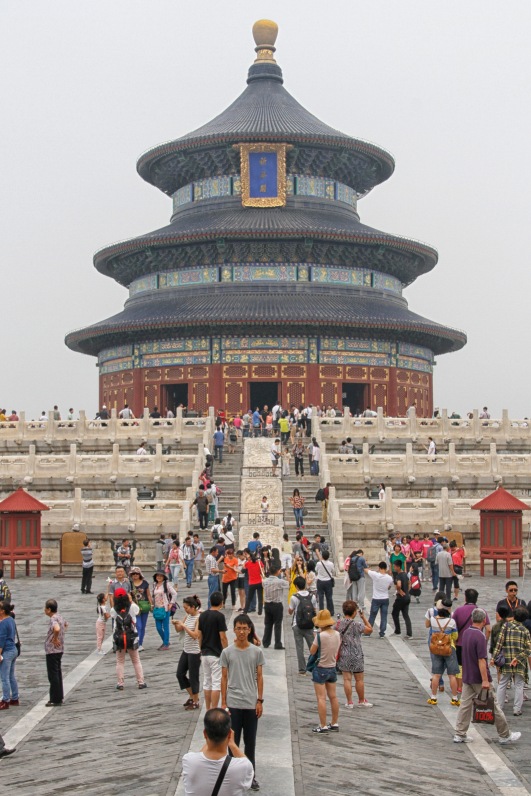 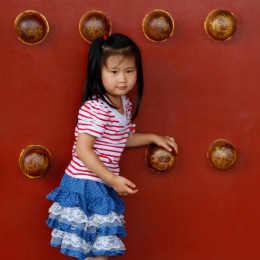 Nearby is a building, closed to the public, where animal sacrifices took place. Also nearby was the first of many wedding photo shoots we’d see during our trip. In China, bride and groom photos are typically not taken on the day of the wedding.

We walked south along the Red Stairway Bridge. Below us, a busker sang a Beatles song. 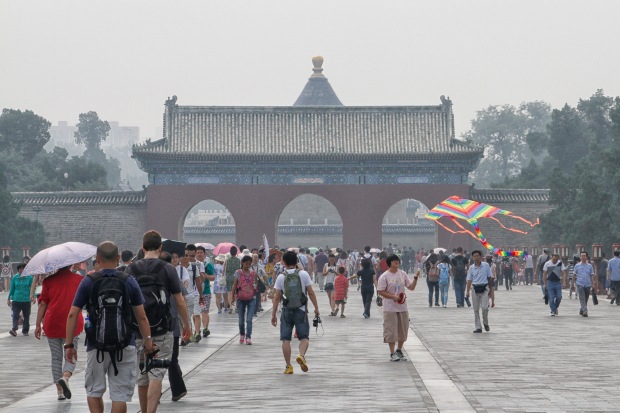 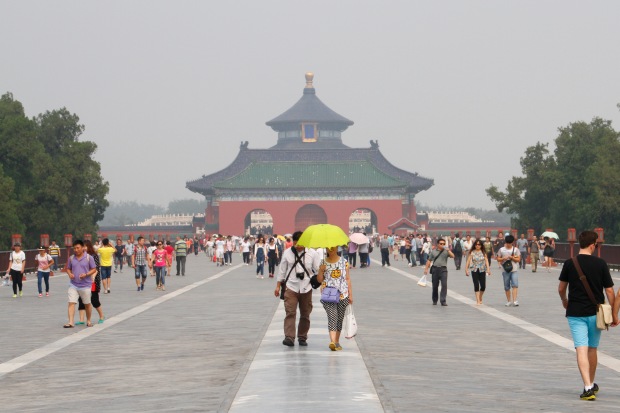 This brought us to the Imperial Vault of Heaven, site of winter solstice ceremonies once upon a time.

The Echo Wall surrounds the vault. It can apparently transmit sound but the space was too noisy with people testing this to try for ourselves.

Just beyond here is the Circular Mound Altar, a large open three-tiered space where emperors worshipped and whatnot. The layout and architecture of the Temple of Heaven is full of symbolism and the number nine is very meaningful with the whole heaven thing. Here at the circular mound, each tier contains nine rings, as does each flight of steps. 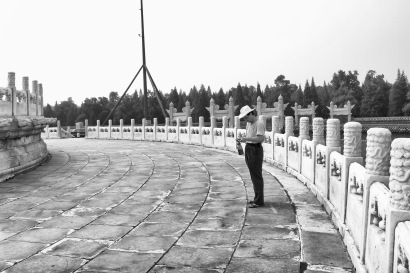 We trudged back toward the east gate, past people still going at it with group activities as well as kookier individuals literally dancing to their own tune.

We were off to find ruins of the inner city wall. – Ruins! My favourite thing!