China 1: Arriving in the hutongs 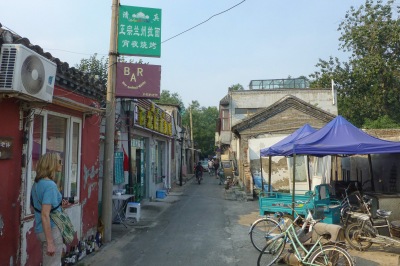 Earlier this month a taxi let us out at the side of a busy road in Beijing, the driver gesturing the direction we needed to head in. Forcing alertness from foggy brains, we crossed the road and trundled up the historic hutong on the hunt for our hotel. 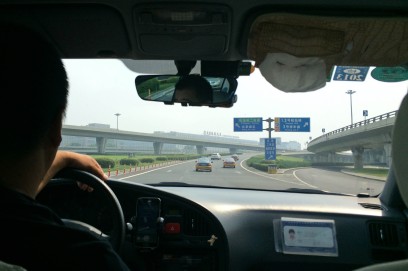 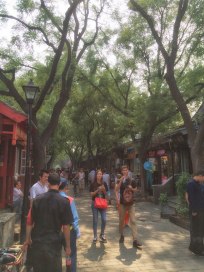 So why China? It was a fairly impromptu thing – Mike’s mind starting whirring earlier in the year when he saw an airfare special and figured we could get there without needing too many days off work. And while China doesn’t really feature on my travel to-dos, I didn’t need much convincing in part because it would be relatively cheap and an opportunity to visit friends who live there.

Because of the 10-day duration I didn’t have any ambitions to blog on the go. Just as well: long hot days on our feet left us pretty shattered each night – also, wifi wasn’t flash.

We flew via Auckland and Hong Kong. Neither of us bounce out of overnight flights rejuvenated and this was no exception. Maybe next time we should do what one of our fellow passengers did and rock a bunny rabbit onesie. (It did look very comfy.) We were happy to finally arrive in Beijing – though surprised just how hazy it was and it made me wonder how much we’d enjoy our five days here.

It took a while for our driver to understand where we wanted to go. The Chinese character translations provided with the hotels.com confirmations proved to be no good whenever we attempted to use them on the trip. The journey was educational in the practices of Chinese driving – it was comical when it wasn’t horrifying.

We found our hotel down a side-alley, not needing the scout sent to look for us which the taxi driver unbeknownst to us had called ahead to suggest! We liked the look of Courtyard 7 when we researched hotels because it was a renovated former courtyard residence dating back 300 years or so. 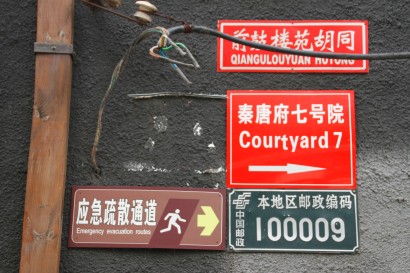 Our room was off the rear courtyard which, back in the day, housed the unmarried daughters. Small but well-equipped, it did force us to confront the realities of toileting in this part of the world. Blessedly ours was a sit-down loo rather than squat, though paper was not to be flushed!

It was early afternoon, plenty of time to do stuff. We ventured back out to the main street, Nanluogu Xiang. It’s about 800 years old but has been restored and is today bustling with life, full of little boutique-y shops and food and drink outlets. Over the weekend it would become very, very busy as kazillions of Chinese flocked into their capital city for the mid-autumn festival. 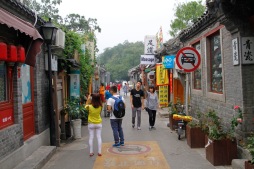 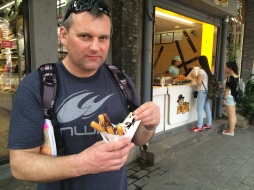 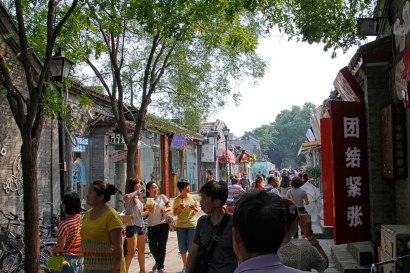 We saw signs of the development that is gradually shrinking the old district. However with about 28 sites around here designated a heritage status, its protection and future is somewhat guaranteed. 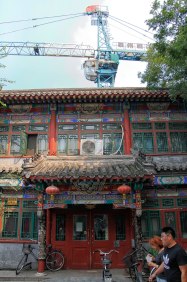 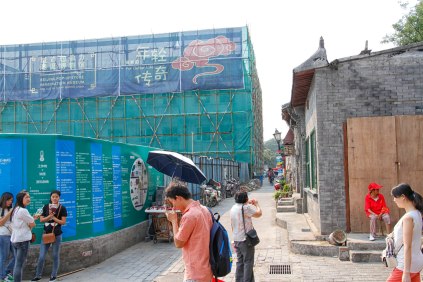 Several hutongs branch off Nanluogu Xiang and we disappeared down a few. These were quieter and more authentic; less commercial and more residential. Really interesting… though we soon realised we needed to keep looking over our shoulders for bikes, scooters and rickshaws. Scooters were the tricky ones – to our surprise they were all electric and you couldn’t hear them coming. 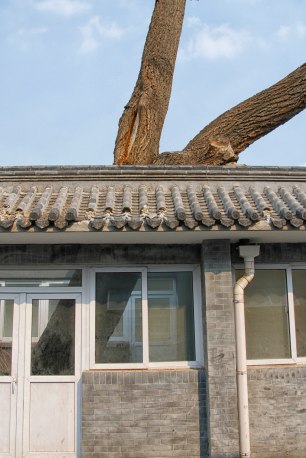 We made our way to prominent features of Dongcheng district: the Drum and Bell Towers. Dating back to the 1270s, their original purpose was musical but later they became Beijing’s official timekeepers until 1924 when Western timekeeping was adopted. The current towers are more 1700s era and we were expecting to be able to go inside but unfortunately both were closed for some kind of renovation work.

The hutongs around here are also taking a hammering. 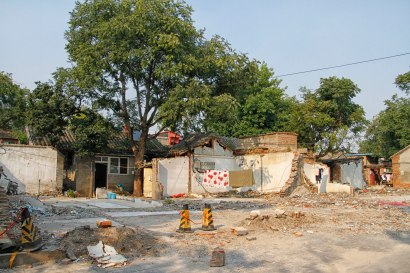 We pushed on. Provided we could keep the yawns under control, we wanted to see the Houhai Lakes and some of China’s famed night lights before we’d call it a day.