It was now early afternoon on this one-day pilgrimage. From the cafe we moseyed to Te Araroa, a sleepy East Cape town but with plenty of interesting features. It is also fairly significant in our family history.

Te Araroa came to being in 1890. It used to be larger than the couple of hundred residents it has today (if that), but the 1930s depression saw the exodus start and people have been leaking out to varying degrees since. The 2013 census showed that the East Cape population has shrunk 10% since 2006.

We started at the church to see if we could find any more family graves. Many were too illegible to tell.

St Stephen’s Church, the third incarnation on this site which may also have been a Maori burial ground. It’s category 2 heritage building and once upon a time had a bell tower.

Back when NZ was divided into counties, Matakaoa County had been based in Te Araroa. My grandfather worked for the county during his time as a roadman. By that stage he was married and a big family was on the way – and Te Araroa is to thank for all that as we’re pretty sure that’s where he met Nana.

Next to the church is Hinerupe Marae; foreground decoration is my cousin Nicki.

A war memorial sits in the marae grounds. Dad was named after three uncles who served in WW2. Two didn’t come home and appear on the memorial (Hooper). One day I hope to visit them in the El Alamein War Cemetery.

One of the big drawcards here is the East Cape lighthouse, about 20 Ks away on mostly unsealed roads. I’ve not managed to get there before and there wasn’t time today either – another reason to return with lots more time to deviate and linger.

This used to be the cinema. 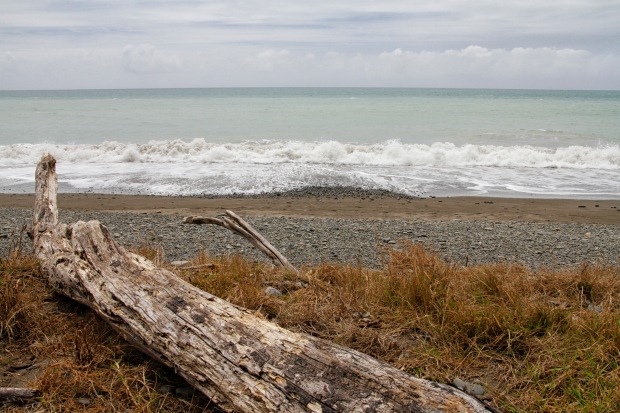 If you got in a boat and made in a straight line, eventually you should end up in Chile. 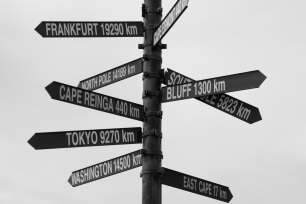 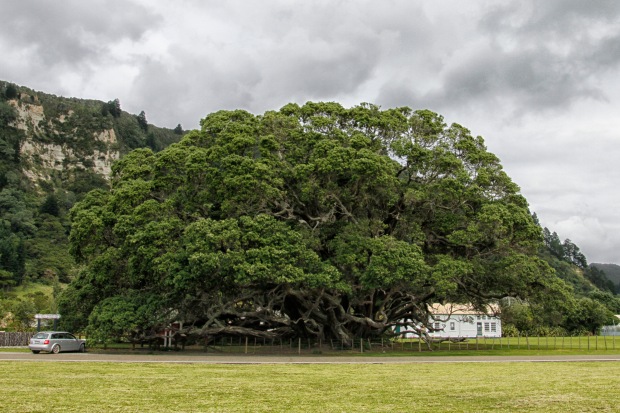 Te Araroa is proud home to what’s regarded as NZ’s largest pohutukawa tree, thought to be about 600 years old. How stunning this must be in full bloom. 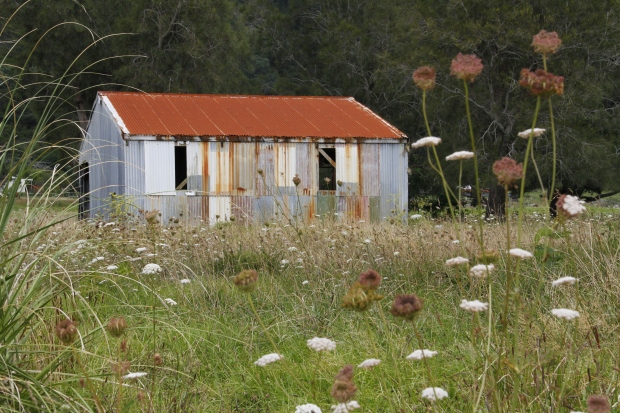 Shed at the back of the site where the Kawakawa Hotel stood for 50 years before it burned down in 2006.

We left, though progress would continue to be stop-start.

We stopped again a few Ks out of town while Dad made a detour to find the property where another of his uncles used to live, before he died in dodgy circumstances. A bit of murder and intrigue in the family tree perhaps? 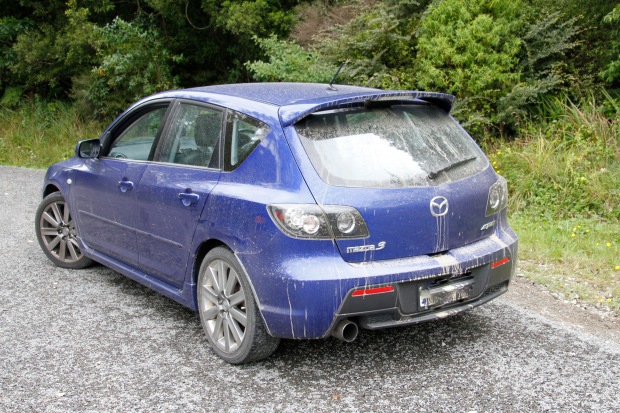 Someone’s going to be busy when they get home 😐

A pause here at Tikitiki was a must, not for family reasons but because the church is regarded to be one of the most beautiful Maori churches in NZ.

St Mary’s Church at Tikitiki was built to commemorate East Cape Maori men who died during WW1. It is situated on an old pa site.

I noticed a statue on the hill above the church. There didn’t seem to be a path up there so I settled for a photo from below. Like the church, it’s also a memorial in honour of the East Cape men who were killed in WW1 – one in five, for a total of 87.

Back in the day, the main road went through the coastal settlement of Waipiro Bay. To get there now you need to detour several kilometres on a sealed but still iffy-ish road, hence many people don’t bother. But today it was a must-see.

The bypass road would drastically change the face of the town. When you see Waipiro Bay now, it is impossible to visualise it as the largest town on the Cape, home to 10,000 people. Now the population is only 1% of that. 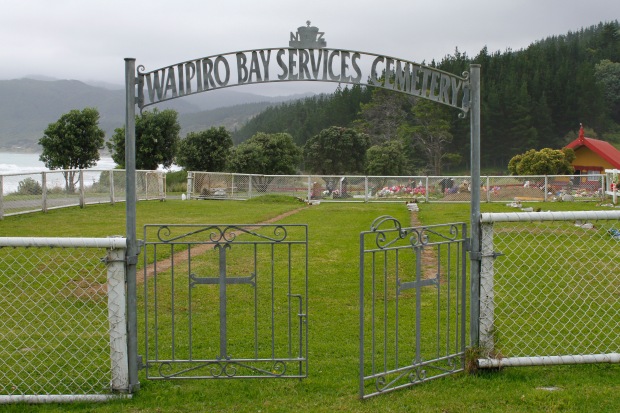 A mostly empty services cemetery – not a bad thing by any means. It contains the official Commonwealth war graves of two local men.

One of Waipiro Bay’s gems, the old trading company. 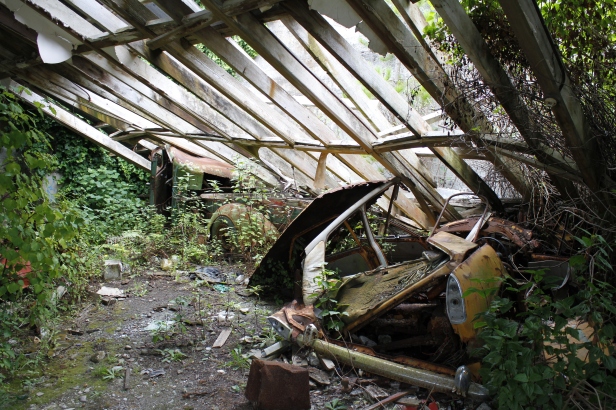 In my research for this post I came across an image of that same wrecked car in 1999.

The main purpose of our visit was to find the old maternity hospital where Dad and several of his siblings were born. It was a house on a hill slightly out of town which had been donated in the late 1930s for conversion into a maternity hospital. It’s not the most straightforward place to find when you don’t have much to go on and the others were itchy to get to Gisborne, so this became a mission for just Mum and I. Perhaps visiting his old house was enough of a trippy experience for Dad for one day! 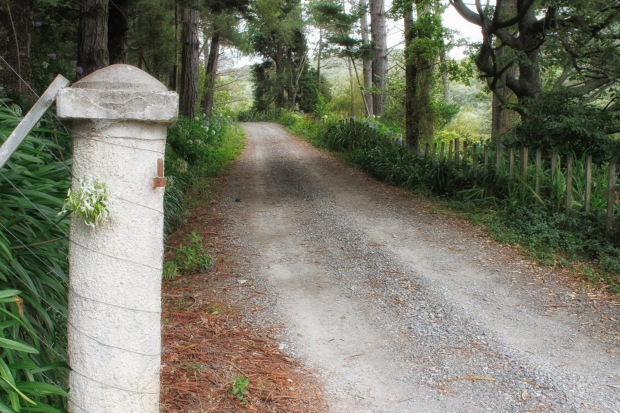 We were looking for somewhere mid-way up the hill as you leave Waipiro Bay. With this kind of driveway, this had to be it.

When we reached the end we were happy to find that it most definitely was the place, looking immaculate now as a family home. A big friendly dog came to greet us, followed by his owner – who happened to be one of the last people born in the hospital. As such, once we had explained why we were there, he had empathy for our cold-call and was happy for us to take photos outside. They get a few such unannounced visits including, one time, a busload of people.

I’ve long been interested to visit here and while I would’ve been equally happy to find a derelict building, it was great to see it looking splendidly renovated.

After the hospital closed it stood empty for a few years. Old photos have been very difficult to locate but this was it in 1964 and this was the emergency escape slide that had been installed for the babies!

Successful side-mission accomplished we got going, though there were more distractions along SH35 to contend with before we’d finally make it to Gisborne.