East Cape 5: A backcountry station and an historic wharf

We left the decaying cottage to drive several kilometres further inland. Vehicles were rationalised down to two for this leg and as we pulled away I glanced back at my car hoping that I would see it again. Near the cottage a couple of deer skins were laid out to dry, or perhaps gate decorations were deemed to be in order.

Mum and Dad did a recce out here the day before with one of Dad’s cousins so while Dad reacquainted himself with the road, Mum pointed out things of interest here and there along the ruggedly beautiful Waikura Valley.

The main point of this rural traverse was to find Matarau Station, the last farm that my grandfather worked on before becoming a roadman. Other extended family members lived or worked here in later years as well, including Dad’s cousin who had been part of the previous day’s mission. And if not the local knowledge he had imparted, I for one wouldn’t have noticed this first piece of heritage. A shelter at the turn-off to Matarau Station.

That’s the original Matarau Station sign on the shelter – not that you’d realise.

We drove up the right-of-way to park in front of the woolshed. It was that classic faded red that you often see in the sticks, giving it the appearance of a shed rich in history, while appearing robust enough to remain fully operational.

Dad’s dad worked, and presumably lived, here during the 1930s.

From Dad’s cousin we learned that the woolshed used to contain a section of wall on which farm workers would write their name. This would have been a fantastic piece of history to see and could quite likely have been a tangible link with the grandfather I never met. Unfortunately though, the current? previous? station owners in their wisdom had painted over this – and put up a sign instructing that the wall remain pristine. 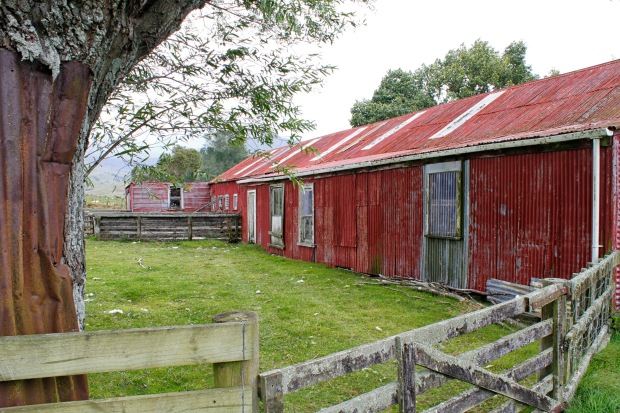 There were two houses a paddock away but we couldn’t see anyone and no one came over to ask why we were there.

A farm workers’ cottage, ageing a bit less gracefully than the woolshed.

One tale from Dad’s cousin we found hard to fathom was that he would bike from here to Te Araroa to go to the movies, 45kms away. Suddenly I felt incredibly sedentary. 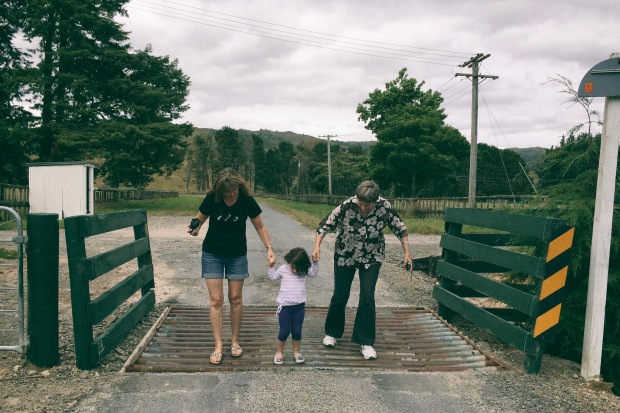 The wee girl made a break for it but after a few minutes of freedom was rounded up.

We made the return journey back to Dad’s old house (woohoo, car still there!). From there it’s five kilometres out to the main road which is a relevant statistic for our next stop.

Out on the intersection of Highway 35 I saw a couple of small wild pigs flee into the tall grass; I on the other hand followed the convoy as it turned left. Half a k or so we made a tight turn left into a driveway.

Dad and his siblings were originally schooled via correspondence at home. Nana was finally able to shoo her little tribe off to school when they became old enough to walk there. The tiny and very remote Potaka School once stood where we had just pulled into.

The school had been in between the old school house, furthest away, and the old telephone exchange.

The guy renting the old school house returned home around the same time and of course was curious why carloads of people were tromping around his driveway. He was quite taken aback when Dad explained he’d been to school there and had lived in the old Oweka cottage. It must be a well-known landmark.

At some point in the decades since the school was relocated a couple of minutes up the road opposite the Potaka Marae. Update: See the postscript at the bottom of this post.

Time to continue the journey south. We agreed a meeting place for lunch and I took off. Ten minutes down the road was Hicks Bay where the others had stayed here the night before and I needed to play catch-up with the main historical attraction there. 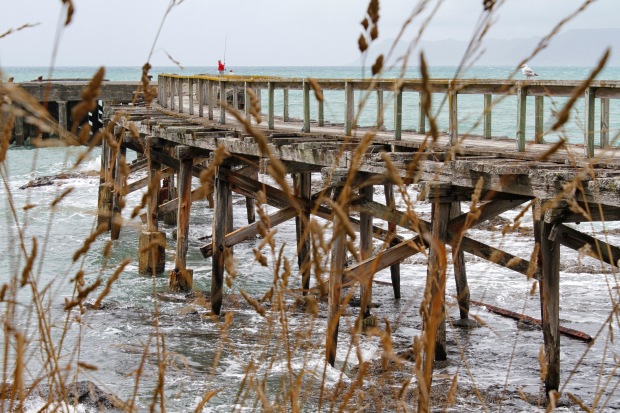 There are signs warning you that the wharf is basically in a very dodgy state.

The main commodity shipped from here was carcasses from the freezing works – a small train was used to take said items out to the waiting ship. 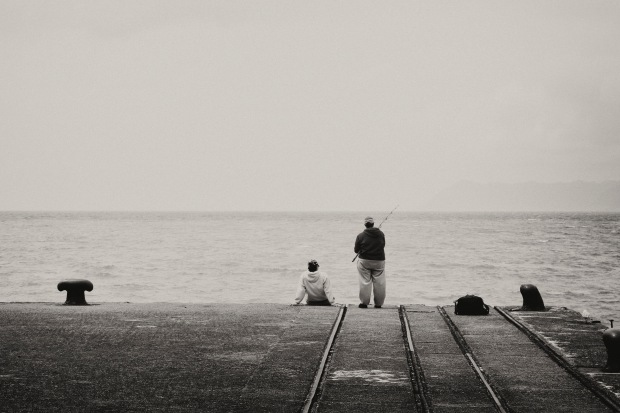 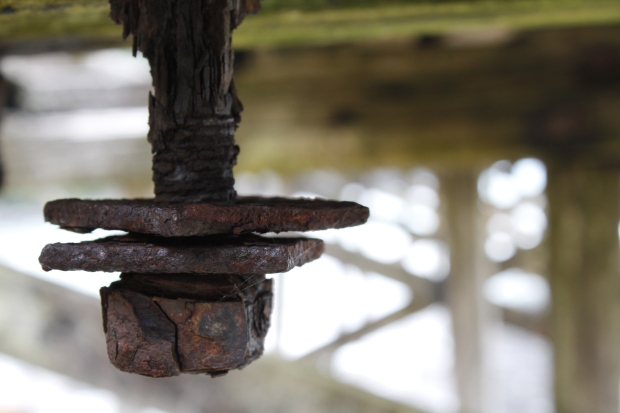 A wee walk and rummage later I drove back around the rough-as-guts track to the more civilised road and found I wasn’t yet done with photo ops.

I noticed this out the corner of my eye and though I had no idea what it was, I found myself screeching to a halt for photos. In prepping this post I’ve found that it’s the old freezing works (which makes sense given proximity to the wharf), a category 2 historic site and now part of a private residence. The works opened in 1921 and closed less than five years later due to insufficient supply of livestock. 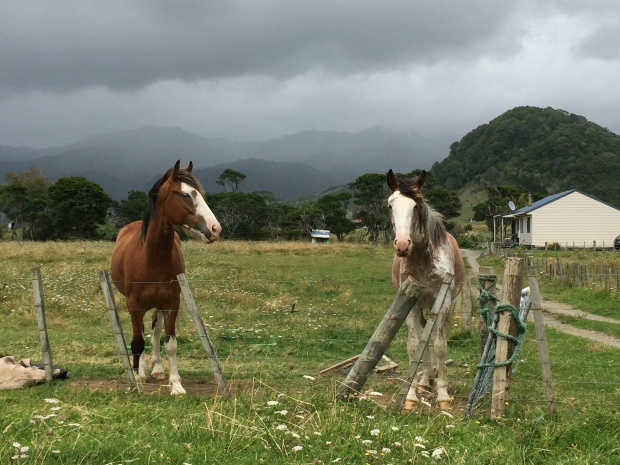 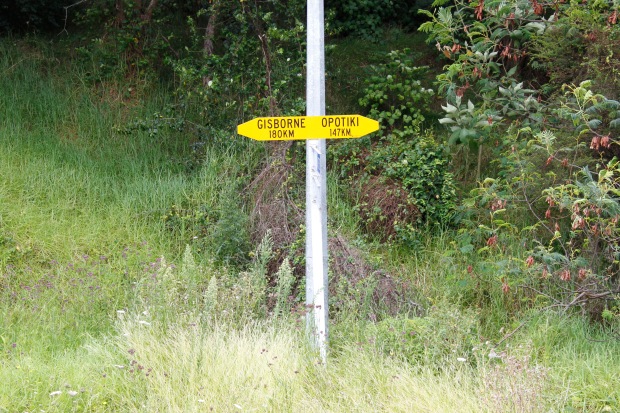 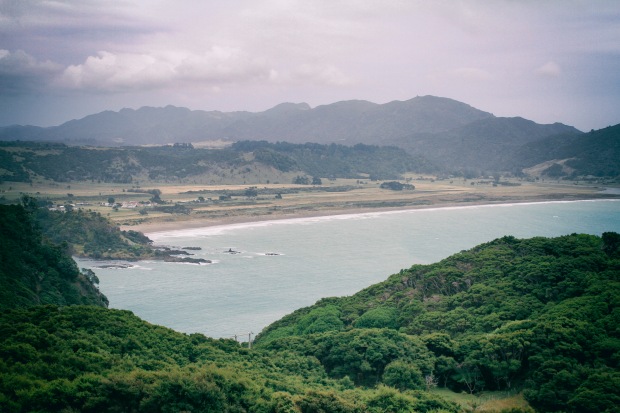 On the other side of the hill separating Hicks Bay from Kawakawa Bay I pass by the camping ground behind which a family cemetery is tucked.

Dad’s maternal grandparents are buried here. I was keen to visit again, having been here 15 or so years ago, but the call was made to leave it out of the day’s proceedings. Mum and Dad had visited the day before, this is my adaptation of one of Mum’s photos.

You don’t necessarily expect to find cafes out here but there is one on the site of a business that makes products from manuka trees harvested on the East Cape. We congregated here for lunch (and a spot of shopping) before going to nearby Te Araroa.

——-
Postscript Dec 2016: Special thanks to Michael Downey who grew up in the same district as Dad and who went to Potaka School on its opening day in 1936. He kindly supplied the below photo of the (tiny!) original school. It was a bit larger by the time Dad started. Mr Downey also provided the following information:

The school was completed in June 1935 by John Downey (my father) for a cost including furniture of 420 pounds. The school teacher’s house was built about a year and a half later. For the first year the teacher (a man) lived with us, and other local settlers as a boarder. When the house was ready we got a new teacher (again a man) Mr Little.

When you look at the photo you’ll notice the steep hillside just behind the school is recently cleared of bush and there are still stumps and remnants of burnt logs. Notice also a fence running uphill between the buildings. This was the “horse paddock”, a fenced area on the hillside where we left our horses during school time. At 3 o’clock two children would walk up and bring the horses down where others would each catch there own horse. You had to be very careful not let a horse out unattended because it would go straight home with no rider. Some would ride with two kids on a horse. And some kids walked to school. So with a roll of about 18 or 20 kids there would only be 6 or 7 horses. 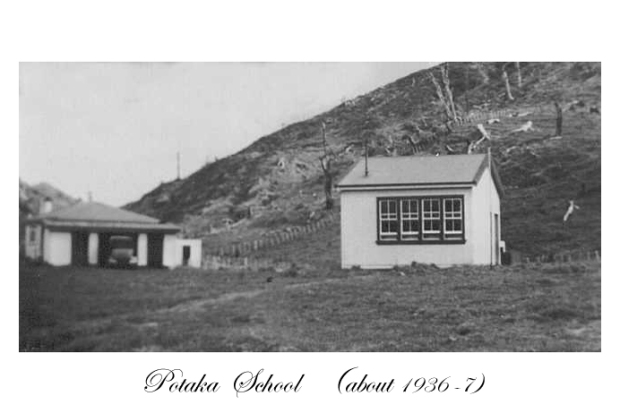