If you want to get up close and personal with Wellington’s rugged terrain in a civilised fashion and at the same time be rewarded with stunning vistas, moments of peace and beauty in the beautiful town belt and a sprinkling of heritage finds, then the Southern Walkway is for you.

I’d walked bits of it before but it wasn’t until January that we did the full thing. It was a clear, bright day and the photo opportunities were fantastic. However, it wasn’t an easy walk and took a bigger physical toll on me than I had bargained for.

The 11km walkway stretches between Oriental Bay and Island Bay, with a big climb unavoidable wherever you choose to start. We drove to the southern end and left the car there, planning to catch a bus back later. From Island Bay it seems you can either walk around the coast and ascend from Houghton Bay, or head straight through the suburban streets and up. We did the latter, one false start aside (I blame the map).

We disappeared down a trail and into the town belt where we picked up the official Southern Walkway. For the most part the green belt seems like native vegetation, but it was assisted by the planting of more than one million ‘exotic trees’ between 1922-1944.

The highest point is Mt Albert where we found a radio mast and old water reservoir. 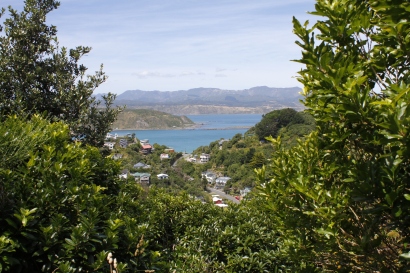 The walkway signposting was quite frustrating and we several times we had to moreorless guess which direction to take. However, once closer to town, progress slowed anyway on account of the features along the way that required closer inspection.

We made it to Mt Victoria, famous for its city lookout point but also a great recreational park. Along or just off Alexandra Road are more interesting landmarks, though by that stage of the walk the appeal of detours was starting to wane and I returned to them the following morning for photos.

Legs were getting pretty over it as we trudged up the final slope to enjoy a few minutes of 360 degree views, watching our proximity to the many others also at the summit on account of our puffed and sweaty states. 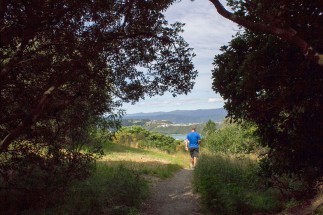 Thinking (happily) that was the end of the uphill bits, we set out on the final leg of the walk. However I was dismayed to find a couple of ‘ups’ tucked along the route. Finally though there wasn’t room for any more and we made it down to Oriental Bay.

I underestimated the extent of hill walking the route would require, which don’t get me wrong is fantastic exercise, I should have been more prepared for it. But something else was going on and by that night a sore area at the top of my leg was feeling more aggravated. The next morning the swelling and redness had spread and I took myself to the after hours doctor where a cellulitis / staph infection was diagnosed.

While that cleared in about a week, it hasn’t been the end of my health hiccups this year! I should probably redo the walkway soon to help rebuild my fitness.