Rotorua 3: A walk among giants

I’ve long wanted to see giant redwoods on their native Californian turf. There’s something about hugely old and enormous trees I find a bit fascinating. But it turns out I can get a taste of this much closer to home.

On the outskirts of Rotorua, a short drive from our holiday accommodation at Lake Okareka, is a section of Whakarewarewa Forest called The Redwoods. This was a must-see on our short stay in the area.

Boys and sculptures at the park entry. I’m not sure why the youngest appears to be strangling the wooden figure.

There are a few trails on offer though we did just the basic circuit – the Redwood Memorial Grove Track – and it wasn’t long before we were treading on an earthy carpet with the forest canopy way above our heads filtering out much of the daylight.

The trees here aren’t big by redwood standards, but they are by typical NZ pine forest standards. Redwoods can live for 2,000 years and the grove in Rotorua is a mere 113 years old, the largest tree being about 72m tall and 1.7m across. In the US, a redwood named Hyperion is the world’s tallest known living tree at 115m and another named Lost Monarch has a staggering diameter of 7.9m.

But why are redwoods (and other non-natives) here, so far away from home? NZ in the late 1800s saw European settlers clearing vast amounts of forested land. Deciding some of this needed to be replaced, the Government bought land blocks from Maori landowners. NZ native trees were not seen to be the pragmatic planting solution though on account of their very slow growth rate. Faster growing species from other countries were investigated, which led to Californian Coast Redwoods being planted in 1901.

Initially grown with harvesting in mind, the redwood grove was later dedicated to the memory of Forest Service members who died in the World Wars. Commercial operations began to cease and in 1970 a walking track through the forest was opened to the public. Progressively, over many years and through many changes of ownership and management, access and facilities were developed.

Except for the odd squeal ringing out from a family group somewhere behind us, it was tranquil. Being among these towering trees, with thriving native vegetation beneath them, was one of the best, most beautiful walking experiences I’ve had. 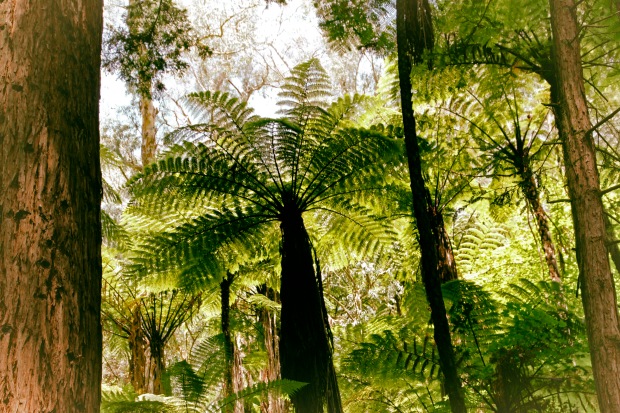 Our walk came to an end and it was time to continue with our other plans for the day. The Rotorua Redwoods were fantastic though one day I do still look forward to meeting their big American ancestors.