A grand old lady and a moody mountain

I had a hankering to get up close to the summertime version of Mt Ruapehu, home to the North Island’s major skifields, and worked in a quickie visit late December. The northern side of the mountain was chosen due to the extra sightseeing potential offered by its chairlifts, to be supplemented by some shortish treks from our Whakapapa village base. However, with a crappy forecast and a busted little toe, this visit was not going to go to plan.

After the side trip to the old Kingseat psych hospital, we had a few hours drive south. It was a wet journey and sure enough, no mountains bothered to greet us as we arrived in Tongariro National Park. Fine.

Part of the experience I sought in visiting here was to stay at the Chateau Tongariro. This grand structure has been an icon of the area since it was built in the 1920s. I’d seen it before, but never been inside.

Instead of going directly to the hotel, we stopped at the National Park visitor centre to check the forecast for the next day. It didn’t look good. Resigned to the inevitable, we stopped to observe a rabbit bobbling around a lawn doing rabbit things, and nearby there were several more. What was going on here?

Finally we checked in. I gawped at the old grandness of the lobby and lounge and we were soon sussing out a spot to sit. Tough decision. We found a couch near a window that looked out across a lawn (where I counted 15 more rabbits… what was going on was probably a ‘pest problem’!) and over to Mt Ngauruhoe – not that you’d know it today. 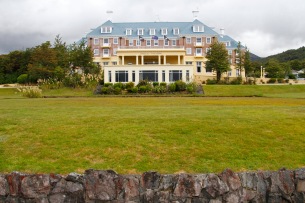 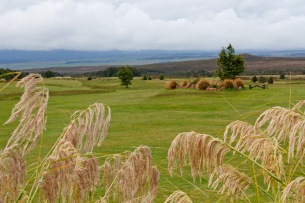 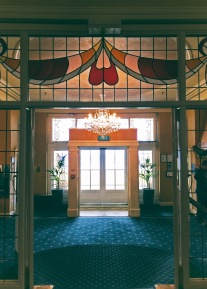 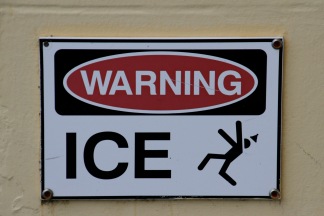 Drink in hand, it was apparent that a wet day could be happily spent indoors. Good to know, given the precipitation promised.

The next morning Mother Nature had duly followed through. Nevertheless we still ventured up to the skifield. Or, what is the skifield in winter. As far as mountain access roads go, this one is pretty sweet: relatively short, nicely sealed and no overly hairy drop-offs.

Up there it was drizzly with low cloud and no surprise, the chairlifts weren’t running. We grabbed coffees inside the cafe before venturing out on a short walk. Visibility would clear a little, then close back in. Slow and careful though I was, I periodically yelped as my dicky toe caught on the rough terrain. We climbed a low ridge where stroppy winds made a sudden appearance and where views remained hidden behind walls of murky whiteness. 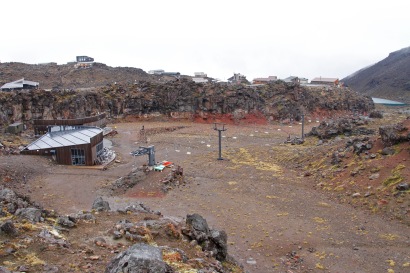 I was reminded of my first visit to Whakapapa, a weekend trip with friends during our 5th form year. Cue the flashback! (And Lordy, me in my track pants as skiing attire…) 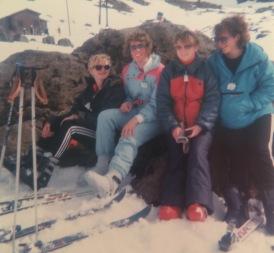 Windblown and damp, we returned to the cafe to eat and see if conditions improved. They didn’t, so we left in favour of a cosy spot back down in the Chateau lounge. The bar facilities ensured we didn’t dehydrate and I thought it would be rude not to try the high tea. The power did blip a couple of times, though with the open fires I imagined it would be a great place to park up in winter.

The Chateau hasn’t always been a hotel. It certainly began life grandly, with a reputation of luxury and glamour, but in 1942 the Government (who had assumed ownership in the early ’30s after the Chateau went broke) took it over as an asylum following earthquake damage to a Wellington hospital. Air Force personnel returning from WWII duties were subsequently sent there to rest and recuperate. The Chateau resumed hotel life in 1948.

With just the following morning left of our stay, we were happy to find the weather had decided to play ball. We ventured over to the village. Handbrake though I was with regard to physical excursions, surely I could manage a gentle nature walk. 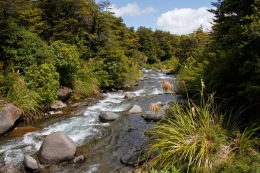 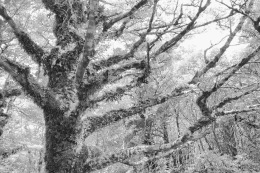 That successfully completed, we shot back up toward the skifield.

The wind was up at the Top o’ the Bruce so the chairlift wasn’t open, though at least we could retrace our steps of the previous day and see what had been obscured behind cloud (e.g. sweeping views, plunging drops but a few steps away).

They were on the verge of opening one chairlift, but not the other which takes you all the way up to Knoll Ridge – home to NZ’s highest cafe. We had to get going so we flagged it. 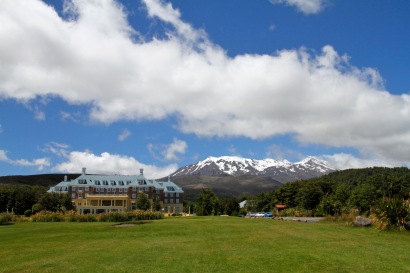 It wasn’t the A Plan but the trip still worked out pretty good. We need to return some time to do the Tongariro Crossing and while this may not justify another Chateau stay, I feel it would be polite to call in on the grand old lady again one day.