Ghosts of Christmas Days past (2)

‘Twas after lunch on Christmas Day afternoon and we were out in the wop-wops near where I grew up. I wanted to ‘go take photos’ so with Dad as chauffeur, Gran riding shotgun and me wedged in the back seat we headed out the narrow metal road to the end of South Head. 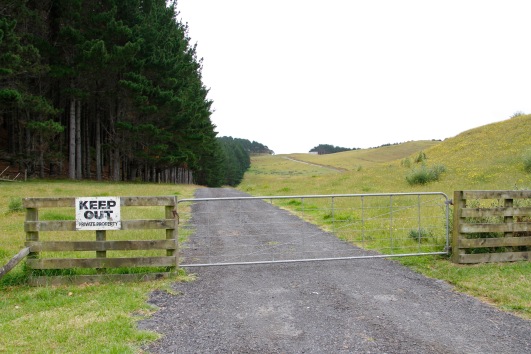 The end of the road for most people. A fair bit of traffic comes up here because the beach below (down a steep track behind where I took this photo) is these days accessible to the public 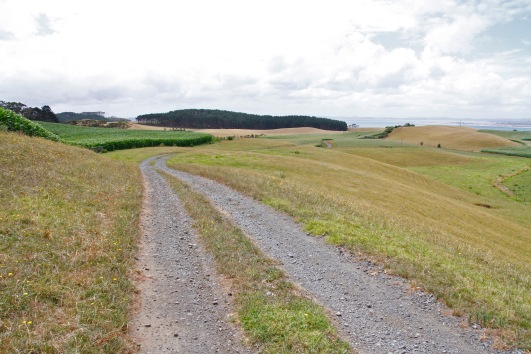 Mum and Dad moved here in 1970 after they got married. Dad had just left the army and secured a job working on this farm. We left in 1984.

This is our old house

Me and a cousin in the early ’80s, the lighthouse and trig faintly visible in the background… 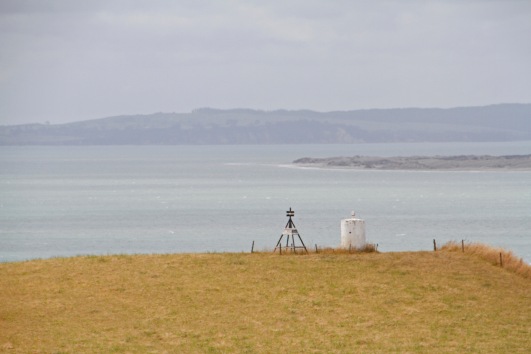 …And today. Not much has changed here!

The farm is still owned and run by the same family, the ties forged long ago enabling us to periodically visit. Today our old house is used more as a family holiday home. I haven’t been inside it since we left almost 30 years ago – or at least I don’t think so. My memory may have a few leaks but I clearly remember the house layout. 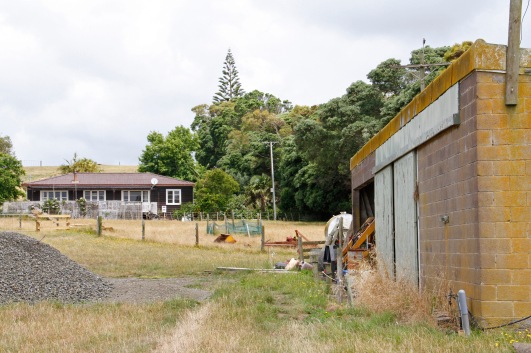 Our house and tractor shed

Visitors making the long trip out to the end are rewarded with views of the Kaipara Harbour. I have wondered if coastal erosion may eventually threaten the owner’s home, set back a short distance at on top of the cliff, but all seems hunky dory for the foreseeable future. 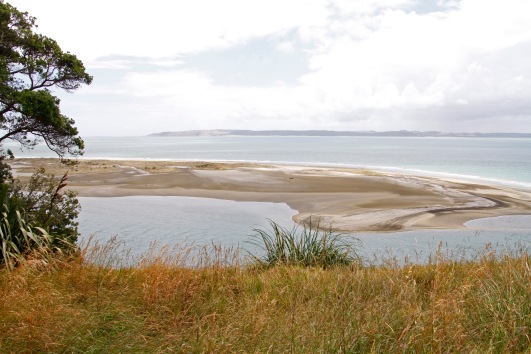 Papakanui Spit – the northern tip of Muriwai Beach which extends some 60km. In the distance is North Head, the other side of the harbour entrance

Another viewing point. The Kaipara is one of the largest harbours in the world and has a treacherous entry because of shifting underwater sandbanks, which have caused the most shipwrecks of anywhere in NZ. When a vehicle track down to the beach washed away, we would get there by scrambling down this hill. It seemed easier then than looking at it now! 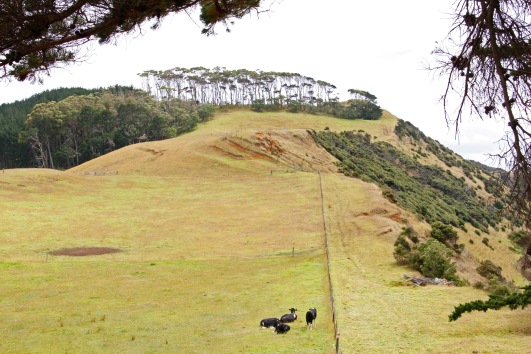 One of our common walks was along this ridge up to an historic site where a Maori settlement had been situated, long before Europeans settled in the area

From the same vantage point I noticed this bull sitting dozily…

…but he got up amazingly quickly when startled by cattle in the adjacent paddock, so I scarpered – mindful of not only of my broken toe but of the time when I, aged 3 or so, ran down the same hill and fell into a pile of fresh cow dung

Back at the car (and dung-free) we set out on the return journey, veering off soon after for a closer inspection of two other landmarks. 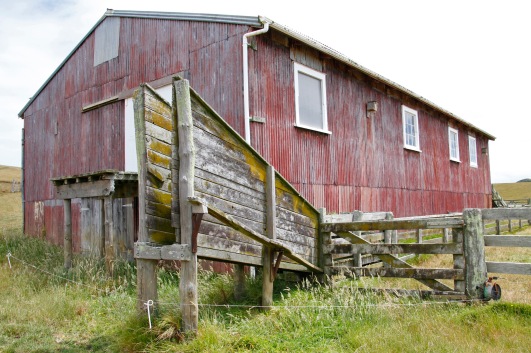 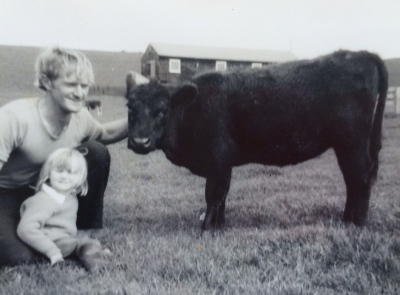 … and the woolshed in the mid ’70s, partly obscured behind me, Dad and the pet heifer!

I decided to venture inside. I undid the bolt and carefully opened the door, only to be mown down by two pigeons. Cue mild heart attack.

While not the hive of activity it once used to be, there are signs that it’s still a functioning woolshed 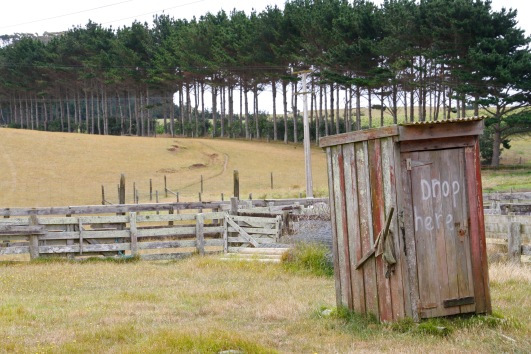 A facility for the brave or the desperate!

Here in the stock yards outside we once kept a pony, named Star, a gift from my late grandfather. I don’t think I visited him very often and that makes me sad.

I walked up the hill to a house long past its prime but one that’s very prominent in my memory. It was the first house out here in the 1860s when a pilot station was established to help ships navigate the harbour. Back then it was located right at the end, where the owner’s house is now.

It should be recognised as an historic site and preserved appropriately – instead, this is it today. 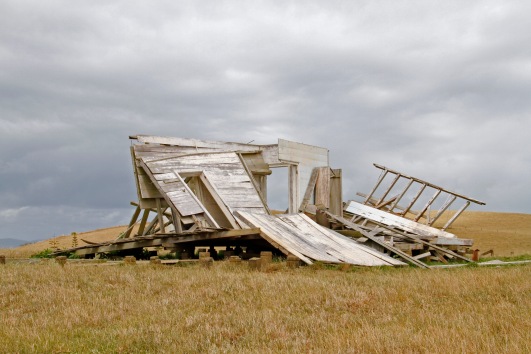 The house was moved to its current location back in the days when sheep ruled the pastures and shearing gangs would come and stay in it. This happened for the first couple of years that Mum and Dad lived here, but after the farm converted to beef the house lay empty much of the time. Swallows moved in, nesting and pooping.

In 1976 or thereabouts, Mum, who was by then encumbered with joys in the form of me and my brother, decided to ask the owner if she could do up a room as a play area. One room became another, and eventually the whole house was cleaned of nests and poop and transformed into a child-friendly space – thereafter becoming known as The Play House. Rooms were given themes: the shop room, the dress-up room, the school room, the Womble room.

The corner where the ‘shop room’ used to be

The corner where the main room used to be

What’s left of the hallway – the outline of my and my brother’s names, which were tacked as individual letters onto the wall, still visible

Little me with my littler brother in the main room, circa 1978

Little me in the old ‘Womble Room’ 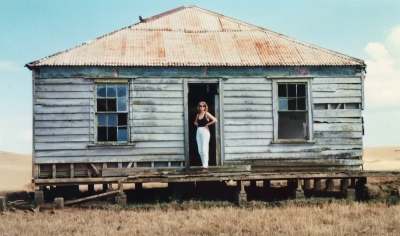 The house in 1998 – both of us really starting to show our ages!

We left the farm, making a couple of futile attempts to stalk peacocks. Those guys are so camera shy. After some further time back with our friend we left South Head, via a quick stop at the venue for many a community event back in the day. 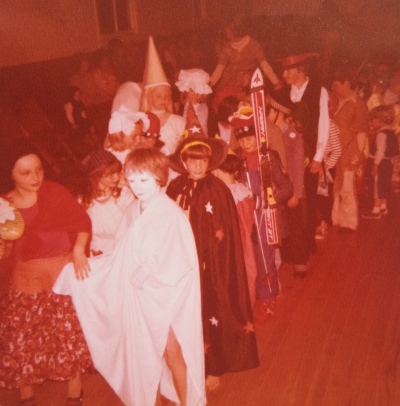 Dress up party (that’s me in the ‘medieval princess hat’) 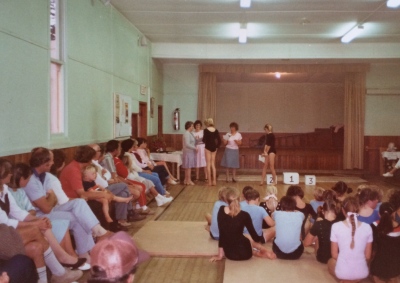 There used to be a Carol Service each Christmas (I’m kneeling on the right, slightly obscured)

And that’s probably enough of those flashbacks!

Other significant places in South Head, my primary school and our home during my high school years, were visited six months previously so we gave them a miss.

And so, having had a reminder of Christmas Days (and many other days) past, we rolled back into Parakai for the remainder of our quiet Christmas Day present.