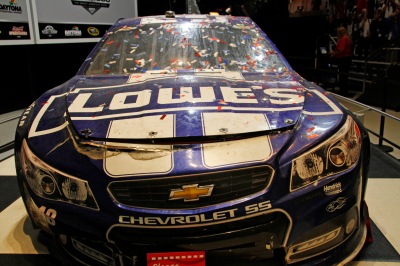 Noooo! The last day had arrived. As well as a general reluctance to end our travel adventures, there was final packing to deal with (cue anxious moments with bag scales) not to mention the wretched journey home.

Our packing joy was interrupted by the sunrise which begged to be enjoyed from down on the beach. 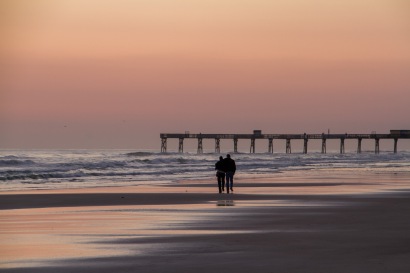 Next to our hotel was a vacant lot which clearly used to be the site of another hotel – I was very curious about it was and why it was gone. 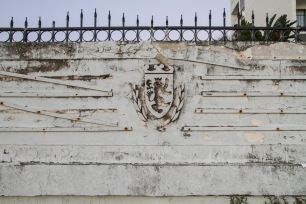 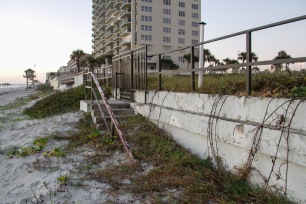 I found the answer thanks to this article. It was the Talisman Lodge and closed as a result of the 2004 hurricane season. (Postcard from its heyday.)

We hauled our ever-so-slightly-under-weight bags to reception to check out, not really wanting to leave Daytona Beach Shores so soon. I’m already imagining a return visit one February, coincidentally when the 500 runs…

Which way now? Easy: left! We had unfinished business back down the road. 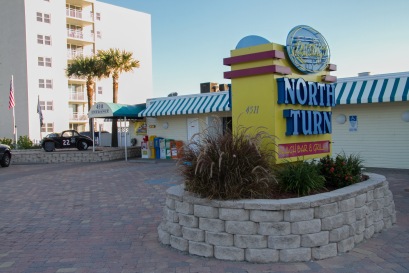 Where we were 12 hours before

This was the north turn

They would head south that-a-way for two miles

The course ran north along beach. Few less condos back then!

The road course operated from the 1930s with an interruption for WWII, after which time it was extended to 4.2 miles. They weren’t to know it then but this was a pivotal time in history as the National Association for Stock Car Auto Racing was borne from a desire to bring organisation to these racing events. The road course closed in 1958 and the following year, the first Daytona 500 ran on the brand new Daytona International Speedway. 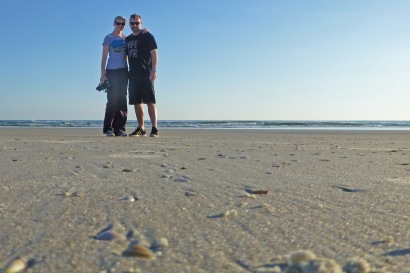 We zipped to the other end of the beach where the main pier is. This reminded me a bit of Coney Island from the start of our trip though it was too early in the day for anything to be open. In any case we were parked in a dodgy spot so had time for just a quick nosey. 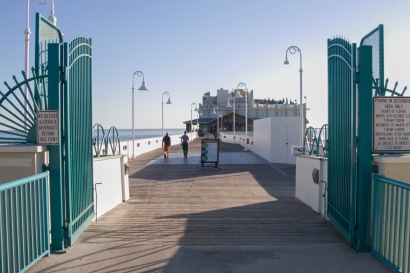 The pier was refurbed a few years ago but has essentially been the same structure since 1925, pretty impressive given the number of storms and hurricanes it has withstood. A casino originally operated here; today it is home to a crab shack. 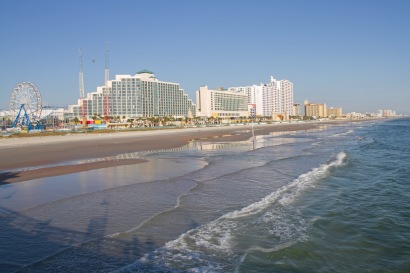 And now it was time to visit the biggest landmark in Daytona. With NASCAR popping up a few times in the trip it was fitting that our final day would also bring that theme to a close.

I’d been here before but the tour then had to bypass the big hunk of missing racetrack. We were in better luck this time and booked the 1.5hr All Access tour. 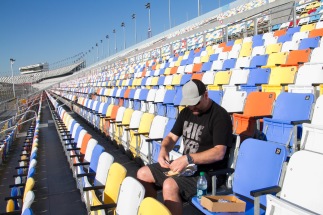 Eat a bagel for breakfast in the grandstand at Daytona? Don’t mind if we do 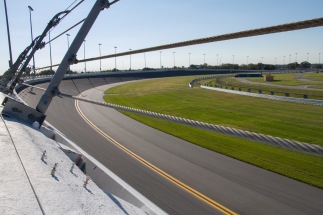 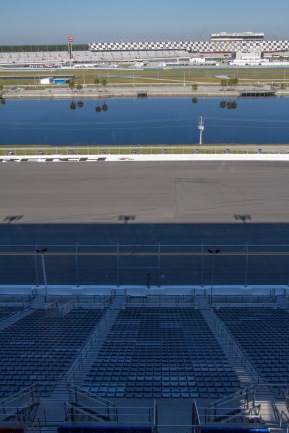 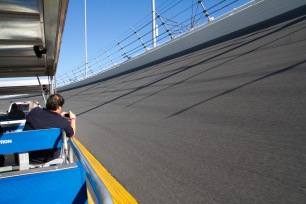 Close up view of the banking 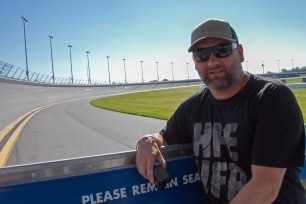 This took us around the track, on the track, into a hospitality suite, to Victory Lane and other prominent places on the infield, and provided a lot of information about the huge $400m development underway. 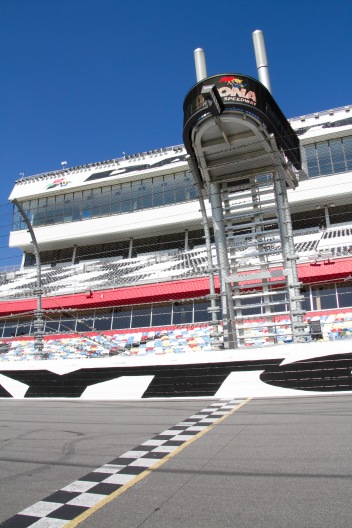 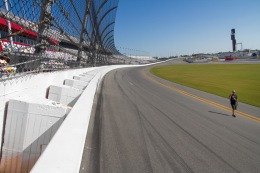 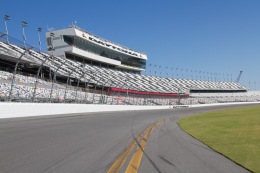 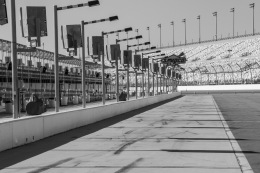 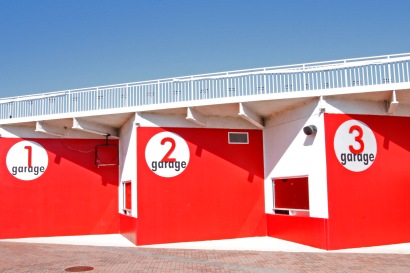 The Daytona Rising project is all about the ‘fan experience’. It will actually reduce the seating capacity (by 67,000!) but the seats that remain will be wider and more comfortable. Some of the development sounds a bit OTT, providing features that could distract from the whole reason you’re at the racetrack, but I’ll put it out there that the track owners probably know a bit better than me! 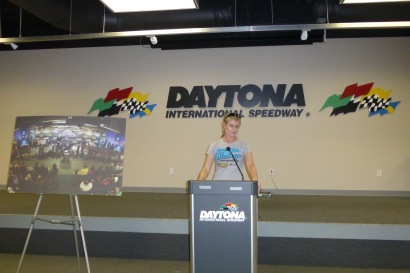 Making an important announcement in the Drivers’ Briefing Room 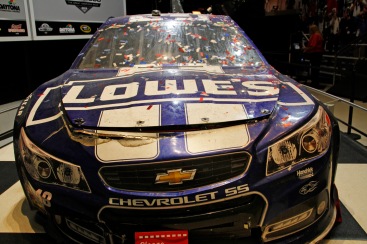 This year’s winning car – left untouched after the race and victory lane celebrations! 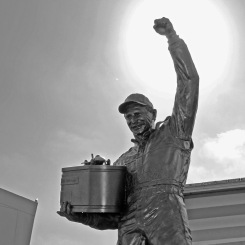 After some lingering in the gift shop it was time to go. Not far though – it was lunchtime and an Applebees was nearby. 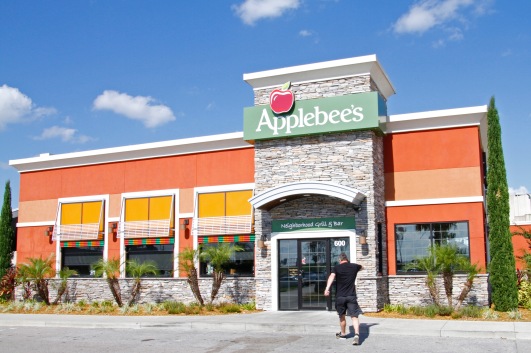 Orlando International Airport was about an hour away. We had just about reached the Avis return depot when (forehead-slap) we realised we hadn’t filled the tank. To add insult to injury, the nearest gas station was horrendously expensive. Good news though when we did return the car: Mike pointed out the palm-tree-patterned scrapes incurred in the Florida Keys and the guy said that given the age of the car we’d probably be fine. The outcome would no doubt have been different if heart had ruled head and we rented something more exotic!

At the airport, counting our remaining change and watching children and adults in their Disney gear, we spent our last few minutes until it was time.

Virgin America took us to LAX and Air New Zealand took us on the arduous overnight flight to Auckland. I sat behind one of those people who recline all the way at the earliest opportunity. My biggest peeve! I just can’t understand the lack of courtesy. Anyway, on very little sleep we arrived and connected through to Wellington. Home by mid-morning, back at work by midday! (Yes, most people did think we were nuts.)

Fantastic trip. Now to plan the next.