On Monday we had a big driving day as we said bye to Alabama and hello to Louisiana (with a quick wave to Mississippi on the way).

The interstates were again very efficient (if incredibly boring), as we weaved around the influx of motorhomes heading back after the weekend at Talladega. 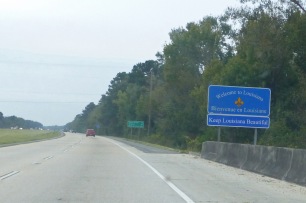 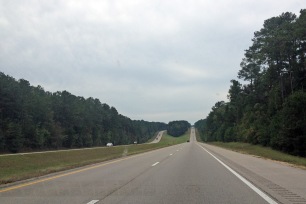 A couple of slightly strange stops punctuated the hours until we crossed over into the pelican state. Here a longer stop was planned just north of New Orleans, in the city of Slidell. My third cousin once removed, Dave, and his wife MaryAnn, live here. I last saw them in 2004 when they lived in Florida.

Dave’s great-grandfather and my great-great-grandfather were brothers in Poland. As can happen, especially with family splitting up to emigrate to different countries, family links got lost for a few decades ago until my genealogist mother and Dave discovered each other in the late 1990s. Dave came out to NZ for a few weeks and numerous family members have travelled to see them.

I was keen to work in another visit on this trip, and when New Orleans featured strongly in our itinerary ideas it all fell into place. On this occasion I was also able to meet another of their daughters, Caren, my fourth cousin.

We didn’t get to meet the large alligator which lives in the lake down the road. 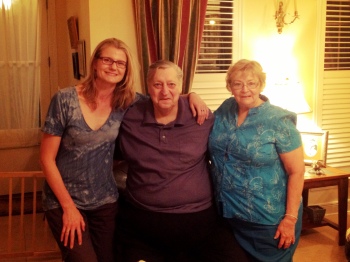 So that was a lovely visit. We did need to push on to our final stop though, which was done in darkness so we couldn’t take in Lake Pontchartrain when we drove over it. Once in the city we quickly ended up in the one-way system, so I discovered in rather tense fashion when a row of headlights came straight for us.

The narrow one-way streets came with very rough surfaces so it was quite unusual not to mention slow going. Especially when we got to Bourbon St, which our route had us intersecting. Here it was like a zombie walk with drunk punters and tourists meandering through the intersection.

We made it to the parking building and walked to the hotel, taking in the interesting medley of street aromas. Once checked in we went to the hotel bar for our complimentary drink before stepping out into Bourbon Street to see it for ourselves. The guide books said to avoid it and we could see why! It was an assault on the senses and I don’t think we were ready for how brash and vulgar it is. Here amongst the beautiful French Quarter architecture, neon, alcohol and blaring live music (not the kind you hope to find in NOLA) reign supreme.

Around the fringes of the tourist hoards are homeless people – the only locals who come here – like the young pregnant woman sitting with a sign, or others who wander through asking more directly and sometimes very crudely.

We left the noisy end and went to the quieter looking end, surprised to see that within only a couple of blocks of party hell it’s a normal residential neighbourhood. 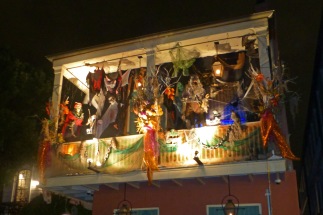 The rear of St Louis Cathedral, very close to our hotel

Wondering what we’d arrived into, we called it a night and looked forward to seeing the city in daylight.