USA D10: An iron city and a Crimson Tide

Day 10 means we’re half way through the trip!

It was a day of two halves. (Well, duh!) The first activity didn’t open until 10am which meant we could dawdle a bit. A few minutes drive from the hotel was Vulcan Park, prominent for the world’s largest cast iron statue plopped on top.

Iron production features large in Birmingham’s history and the Vulcan is a Roman-God-like bloke memorialising that. It was first made for the 1904 world fair and was eventually moved here to the top of Red Mountain. It needed two big renovations over the years and now looks pretty good in an iron-Roman-God-like way.

We went through the museum and up the Vulcan – it was quite high and Mike will vouch for my bravery – before leaving the city to continue the iron theme.

Cityscape of Birmingham from Vulcan Park 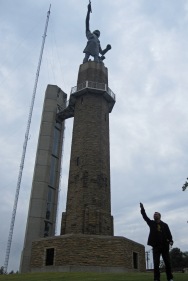 Mike could well have been the model for the Vulcan

Half an hour south we veered a few miles off the i-road to the Tannehill Ironworks Historical State Park. In about 1830 the area was found to be rich in certain natural resources which led to an iron operation being set up. Later this was a strategic asset in the Civil War for the Confederate Army, until the Union Army destroyed much of it in 1865.

Now it’s a 1500 acre recreational park, including museum and 45 historical buildings. A lovely wooded area, peaceful but for the few hundred people there for a trade fair thing, and calming but for the flying insects – but at least they were small and didn’t want my blood. 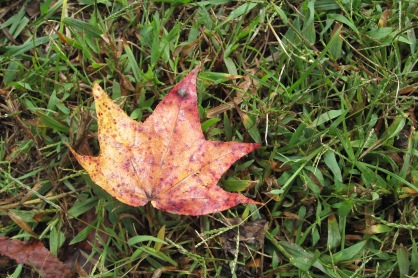 Back in the car we continued to the city of Tuscaloosa. We were among thousands of people swarming in for the College Football match between Alabama University’s Crimson Tide and University of Arkansas’ Razorbacks.

I don’t know how much gridiron I would have previously watched but it might accumulate to half an hour in total. Hence if you were to ask me what the rules are I’d stare at you blankly until it would get creepy and you’d have to move away.

College Football isn’t top-tier NFL but it is taken very seriously here and is hugely popular. (The home stadium for the Crimson Tide has a greater capacity than the population of the city.) It was Mike’s instigation to go to this but I was keen to experience the whole spectacle of it.

Thankfully Mike had done some excellent homework and logistics on the day were painless. After parking we caught a shuttle that took us very close to the stadium. The area all around the stadium and university was busy with people, 90% wearing the team colour maroon. The game was not for another few hours as first there were the other elements of game day to take in. Mike knew the university quad was a big focus area so we headed there to find a huge space divided into marquees which people reserve/rent for the game day festivity of tailgating. 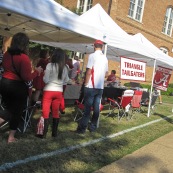 A game of cornhole in progress! It’s big in these parts…

The quad (and bell tower) from the library steps

Around the bell tower is the Alabama football captains’ walk of fame, dating back to 1940s and updated each year

A blow-up version of Big Al the elephant (I’m referring to the grey guy in the maroon shirt, in case there’s any confusion), the Alabama team’s mascot 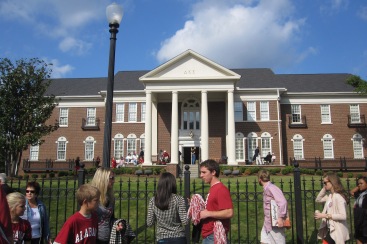 Two hours before kick-off, the home team arrives so we shot back across to the stadium to join the thousands there for the ‘Walk of Champions’ tradition.

Then it was back to the quad to see the university marching band (called the Million Dollar Band), which forms an hour before the game. When we arrived, each instrument section had split off into various areas for practice. I couldn’t believe how many trumpets there were for a start; even so, it was still eyebrow-raising to later learn that the band has 400 members. The whole band, plus cheerleaders, girls with batons and girls with sparkly pompoms, then formed together on the steps of the library and played a few numbers.

The buses of Alabama players arrive

The saxophone section gathering for practice

We took off before they finished to get back across and find our seat. Should I say, ascend to our seat. Didn’t need oxygen, but almost. 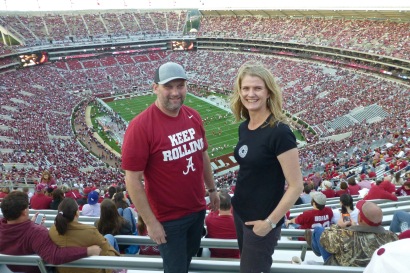 It was largest stadium I have been in. Capacity is 102k, making it the 8th largest (non-racing) stadium in the world

The band going through its routine

Another good thing about Mike’s homework was finding out that there are strict rules about bag and camera size. I didn’t really see the strict enforcement being applied, having gone to the trouble of getting a smallish bag before the trip for that reason, but to be safe I did leave my big camera at the hotel. It was quite liberating using the point-and-shoot for a day instead.

After some ceremonial stuff and formalities the game began. It was soon apparent that the home team was just too good.

Much like the hockey last week, it was fascinating hearing the various chants from the crowd, coinciding with certain events on the field. This high energy was kept up consistently. The breaks in play did get tedious and it was often tricky to see where the ball was, but it was enjoyable all the same.

The stands began to empty out from half-time. We planned to leave after the third period and in fact left a teensy bit earlier – it was an hour’s drive back with an early start the next morning.