So now I’m a day behind – gah! The turnaround between Sat night and Sun morning was a bit too tight so I’ll get back to our fantastic day 10 when I can. I thought I’d momentarily skip it to report on yesterday.

We made it down to the hotel breakfast buffet for its 6am opening and had pulled out of the carpark by 6.30am, TomTom dialled in for Talladega. The roads were excellent and all three lanes of traffic were very fast-flowing so we made it to the track without any faffing.

When we bought our tickets we also booked a package called the Talladega Experience. This included hospitality, driver Q&A session, pit lane walk and being on the track for driver intros. We scoped out the hospo tents and had to have a second breakfast, just cos we could. Who doesn’t like access to free food and drink?!

It was a great setup helped superbly by the bluebird day, with central courtyard area and other activities around the edges. The weather yesterday had been a bit dodgy and resulted in the cancellation of the NASCAR qualifying session. We weren’t at the track on Sat but got rain where we were too.

Four drivers appeared for Q&A sessions which was a good opportunity to see them up close and get further insight. 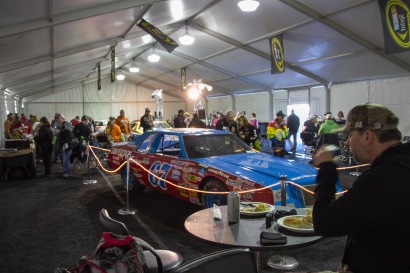 Food and drink on tap – marvellous

We made a beeline for pit lane – to get there we had to cross the track which in itself was neat. The banking is very gentle on the straights, but out on the four main turns it is 32-33 degrees – a tad steeper than on the old Monza circuit in Italy which I found impossible to walk up.

It was very congested but to have this kind of access was fantastic. NASCAR is incredibly popular and the sport prides itself on enabling fans to get much closer to teams and drivers than is possible in many other types of motorsport. 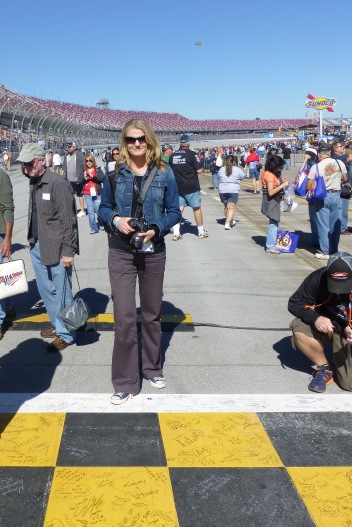 Jostling for position on the finish line! 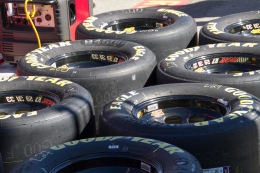 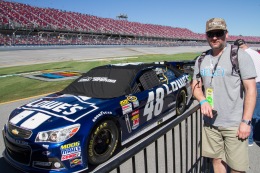 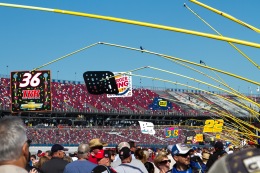 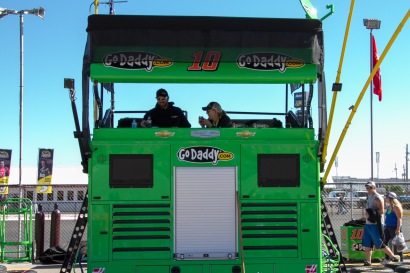 Mike supported this team already and after our recent visit to the Bass Pro Shop, Mike is a big fan of their sponsor now as well 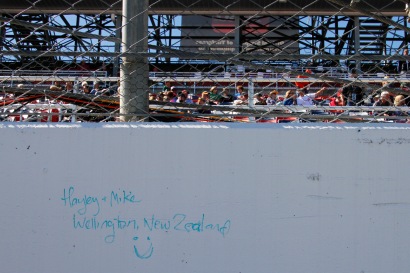 Utes lining up for a drivers’ parade lap after the intros

Very happy I got to stand on the track at Talladega

No squirrels again – not surprising I guess – but I found some cute stand-ins. 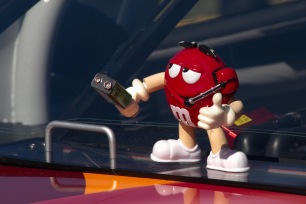 Most of the cars had a little stand-up thingy on their bonnets for the pit lane walk. This was on the M&Ms sponsored car 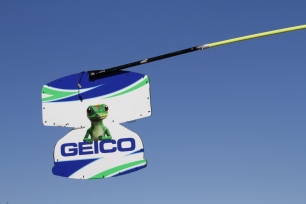 We stayed on track for some formalities and the driver intros before heading up to find our seats. We sat down then had to rise again and remove hats for the national anthem. Naturally this happened when I was juggling sunscreen, water bottle and camera on may lap, and had just finished tucking my hair into a cap. The anthem was performed by a country singer, of course. 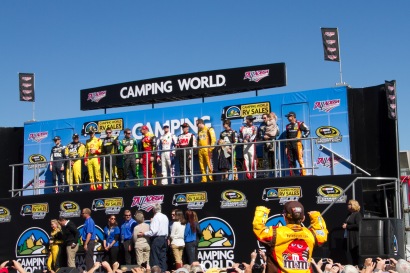 The drivers in the ‘chase’, a subset group who are fighting for the championship

Dale Jr – the guy who should have won 🙂

Several drivers brought out their children 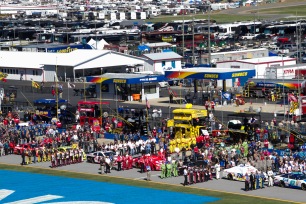 Teams lining up during the national anthem 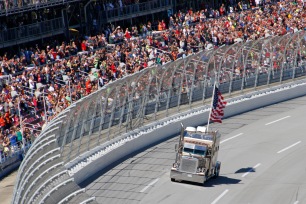 This truck did a lap during the national anthem

Soon after the cars roared into life and got sent off on their warm up laps. About 100,000 people stood for that inevitable change in pitch: they were racing! We usually watch a recording of this race on tv so to be here live was very, very satisfying.

Wrecks are expected at Talladega and after only four laps the first caution was out, just to clean up oil after an engine decided it really didn’t want to continue. But the ‘big one’ never eventuated. Not that this was a bad thing – I was just curious to see what one would be like here in person. Two small crashes did happen but overall it was probably a fast race by Talladega standards.

Our seats gave us good views of pretty much the whole 4.28km tri-oval track and pit lane, which was a busy place given each car makes multiple stops. Pit stops were often preceded by cars switching from two, three and sometime four wide to circulating in single file.

Things were looking good for driver 88, who should have won 🙂 (and the place would have absolutely erupted had this happened), but it went to pieces a bit on the last lap and he finished second. My only criticism really is that there was a lack of racing in the last 20 or so laps, with most of the field again reverting to one big single file draft. Several tried to form an inside line but that fizzled and it became a waiting game to see how the last lap would play out. A small wreck on the back straight mucked that up. 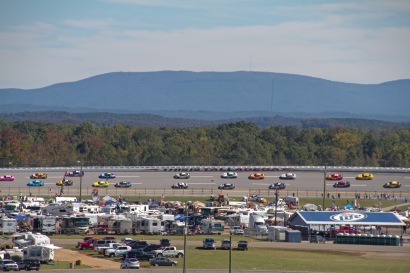 Not far off race start now 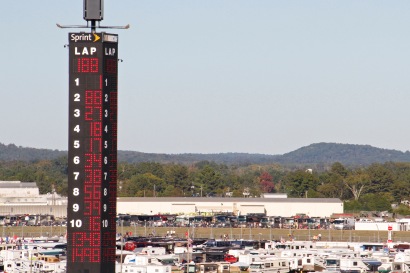 This is how they finished. Rats 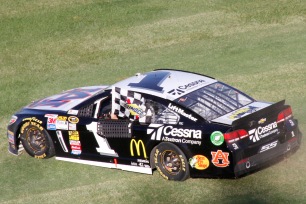 The winner, Jamie McMurray, doing the customary burnouts on track and grass 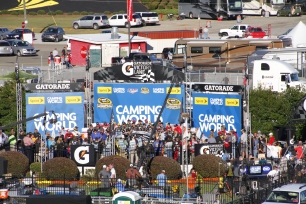 Result aside!, it was a brilliant race and experience. To let the traffic subside a little we wandered around the merchandise trucks again. On returning to the car, some guys in the vehicle alongside were having a beer and we got chatting to them for a bit. Socialising in parking lots and camping grounds – aka tailgating – is a big part of the sporting culture over here and it was nice conclusion to the day.

This ended a brilliant weekend here in Alabama.