After a good sleep on the world’s most comfortable bed (I.want.one.) and breakfast from the excellent buffet style set-up at the local Whole Foods Market, we walked back into the city centre. It wasn’t too busy on account of it being the Columbus Day holiday. 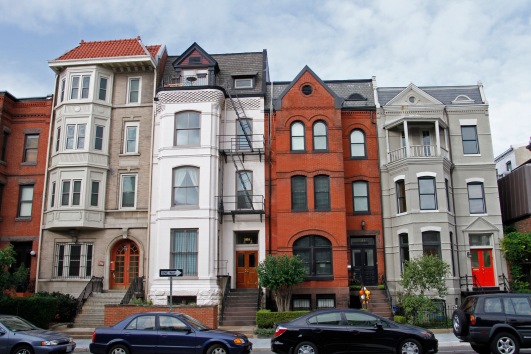 Not far from the hotel 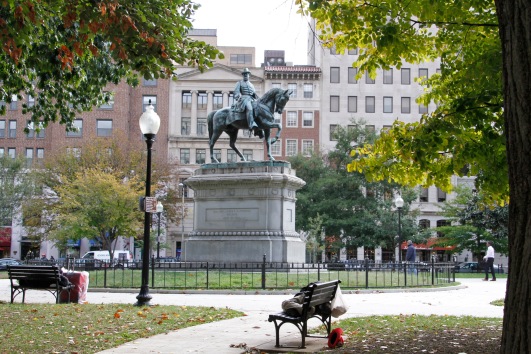 One of the areas frequented by the homeless. In our short stay we’ve seen many people sleeping rough 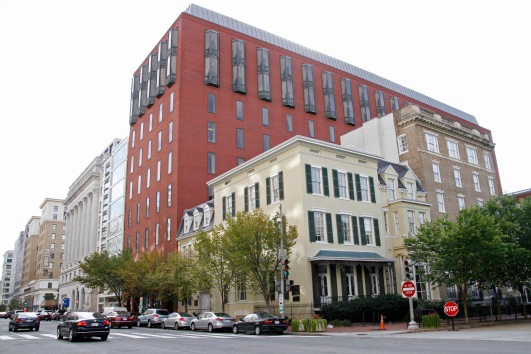 As much as DC has lashings of memorials and fabulous architectural styles, it is also has countless big boring buildings. Sometimes old and new sit awkwardly side-by-side

Similar to yesterday, today’s plans were going to be a bit stuffed up. Bookings for the National Archives and US Capitol were worthless since those places are among the many that are closed. We bought hop-on, hop-off tour tickets with the goal of seeing a bit more of the city and getting across to Arlington Cemetery, which we were going to bring forward from tomorrow.

If we knew how the day was going to pan out we probably wouldn’t have bothered getting the tickets, though the man from Senegal we bought them from was very appreciative (he and Mike had a quick chat about world cup football qualifying), and the commentary was entertaining.

However, there was confusion about which stops were closed and therefore how the loops had been modified. They weren’t running over to Arlington Cemetery like normal on account if it being closed – except it wasn’t. Mike knew this but who knows how many others took the tour guide’s words as gospel.

We found ourselves at Union Station with half an hour until the next departure on our loop so we instead walked to Capitol Hill, since it was just ‘over there’. In hindsight, I should have first used the rest rooms at the station. One very frustrating aspect of the shutdown is that the very few public toilets that exist around the National Mall and Memorials area are also closed. It’s ridiculous. Anyhoo…

Strolling by the Senate and House of Representatives chambers – flanking the main dome of the Capitol, it all combines to provide an exquisitely grand picture of perfect architecture and symmetry – one hopes ‘they’ were all busy inside somewhere sorting out how to fix the shutdown. 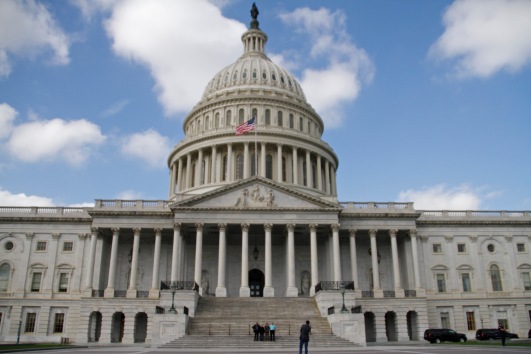 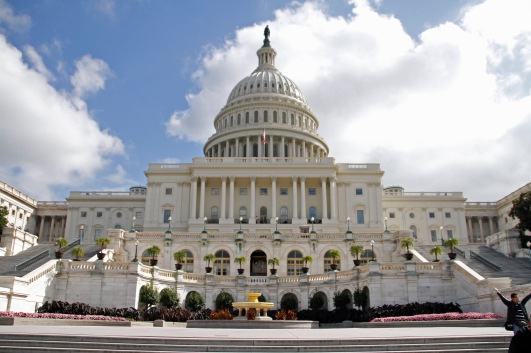 And the west front 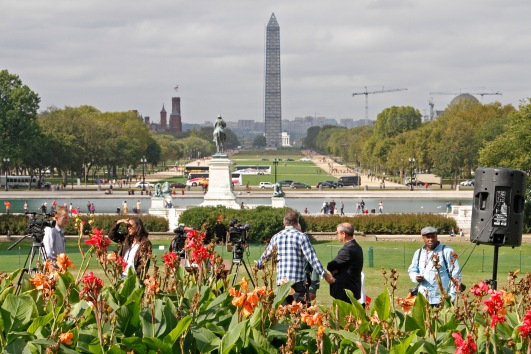 We hopped back onto the bus to get close to the Lincoln Memorial, from where we could walk across the Arlington Memorial Bridge. There was a deviation though when we realised the barricades were being less fervently guarded today and people were just walking around them and up into the memorial. Fantastic. 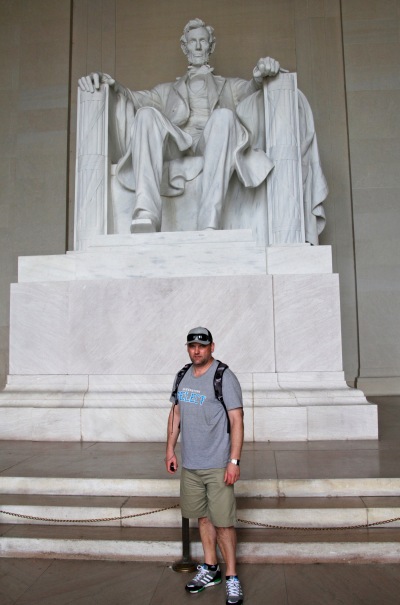 With a growing desire to find rest rooms soon, we walked over the Potomac to Arlington. 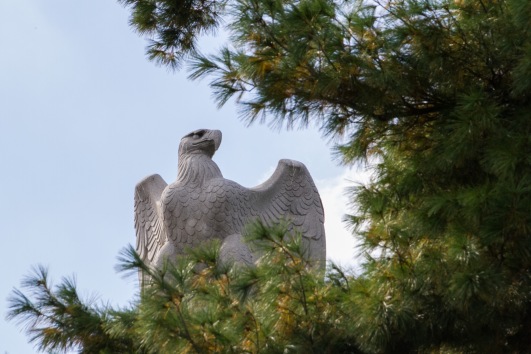 To say I was relieved that the visitor’s centre at Arlington Cemetery was open as normal is putting it mildly. With about 20 minutes to the hour, we then trotted off up to the Tomb of the Unknowns for the Changing of the Guard. Good timing. 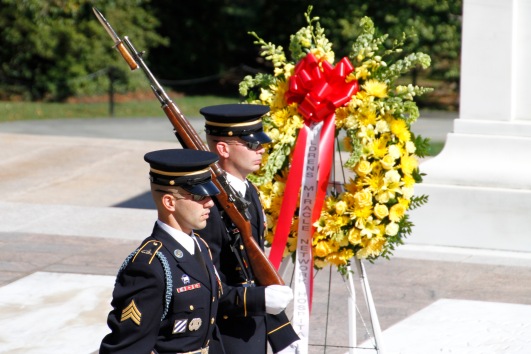 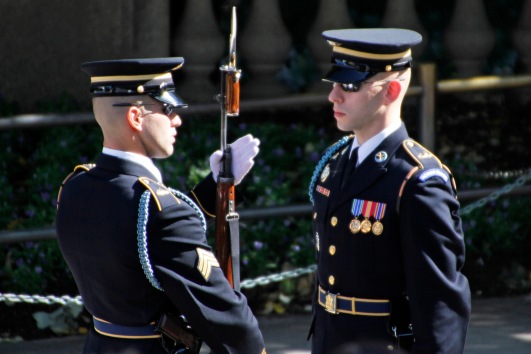 We wandered back down. It’s a beautiful cemetery, enormous too. I recall hearing that based on the current rate of interment they will run out of room in about 2025. 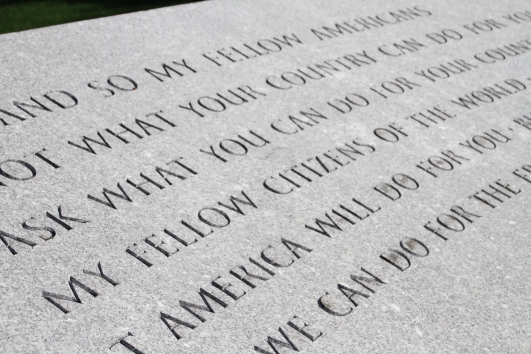 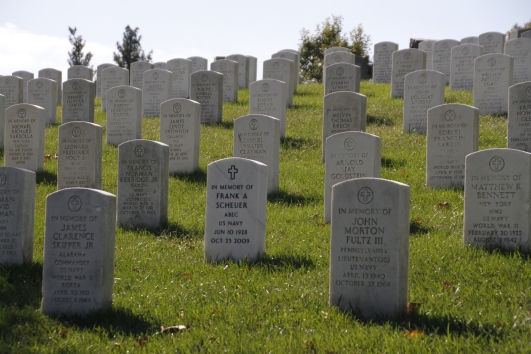 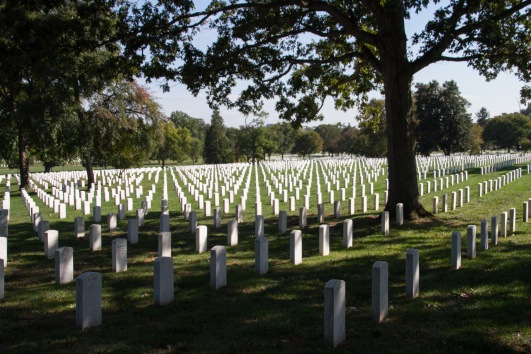 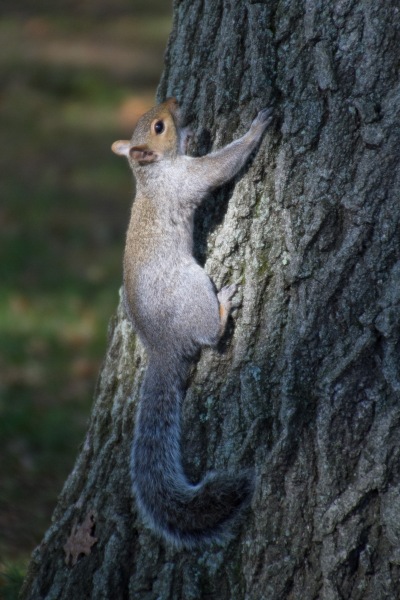 I now feel compelled to include a squirrel picture every day, where possible

Time was getting on and we ditched any thoughts of further bus tour stuff. We had to get back to the hotel, sort out a meal and whatnot, and get across to the Verizon Centre for the second of four sports events on this trip. This time it was ice hockey, an NHL match between the Washington Capitals and Edmonton Oilers.

I was really looking forward to this and it was fantastic. Our seats were high up but not squeamishly so and we had a better/closer view than with basketball the other night. I just love watching hockey players on the ice, they are so fluid and skilful. 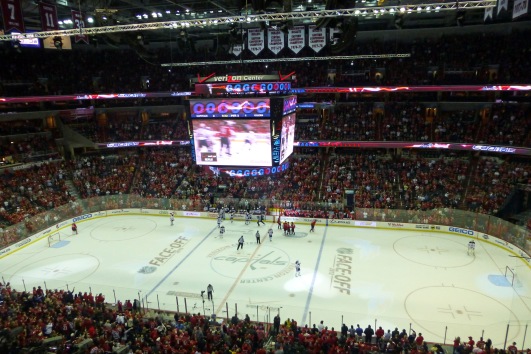 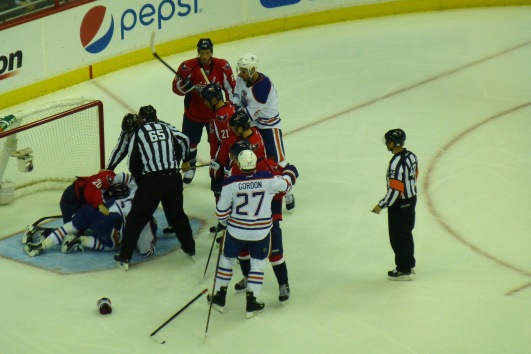 And what’s a hockey match without a bit of biffo

A lot was riding on this – we basically have to adopt the Caps as ‘our team’ now that we’ve been to their home stadium. Luckily they won. 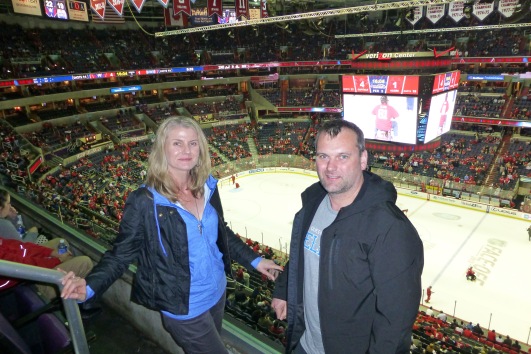