Much as we were settling into life-by-the-lake, we had planned a day trip to Taupo about 20 minutes away.

The town of 20,000 or so is pretty much a tourism destination what with the lake, geothermal features, and proximity to the mountains and Waikato River to name a few things.

And that weekend we were tourists!

A short way out of town is a place where the Waikato River converges through a narrow channel and gushes down a short waterfall. The flow rate varies according to hydro power station control gates further upriver. At full tilt it’s a captivating sight with furious torrents of white water. Fittingly, Huka (hooka) means foam.

We hadn’t timed our visit optimally for maximum furiousness, but it was still impressive. And best of all, it’s freeee.

There are more sane ways to see the falls from the water. 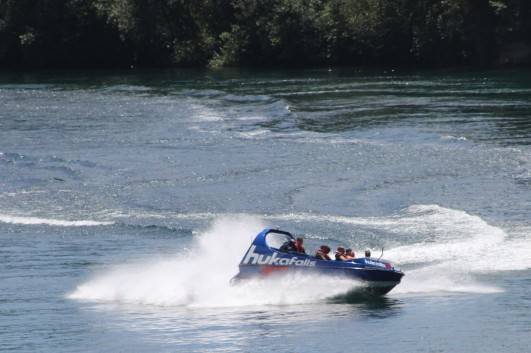 If you’re short on time or gagging for a shot of adrenalin, this would be the way to go

Or for something a bit more tame, there’s the Maid of the Falls – vaguely akin to the tour boat experience at Niagara Falls

As we left a group of ‘backpackers’ (I’m generalising) had just arrived by bus. Whereas some trotted off, a few looked content to just sit it out in the shade and not bother to go beyond the carpark. I know what it’s like to feel jaded by travel, but all the same – what a waste!

Craters of the Moon

Not far away is NZ’s largest geothermal field, Wairakei. The country’s most famous geothermal area is about an hour away in fragrant old Rotorua, but Taupo also has a couple of places where you can appreciate this unique terrain.

The terrain gives rise to the name Craters of the Moon, a ‘steamfield’ in Wairakei through which a walkway has been created. The modest entry fee makes it an economical family activity.

We slathered on sunscreen and set off in a hot part of this very summery day, not overly concerned since the circuit only takes about 45 mins to complete.

Three quarters of an hour didn’t allow for a bunch of dithering by someone keen to shoot a bunch of photos but that’s ok – I’m happy trailing the pack in those circumstances to snap away as I wish. 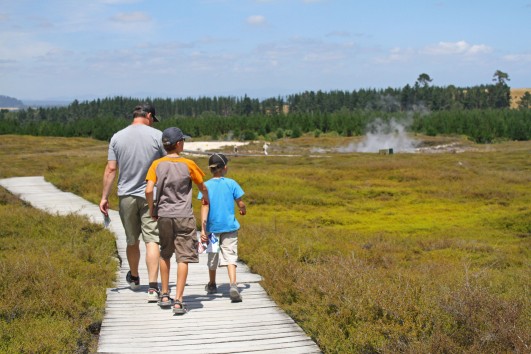 A few decades ago there were geysers but these dried up with the introduction of geothermal power development nearby. The flip side of that is a boost in ground hotness and steam related activity at Craters of the Moon.

As a result, the land is constantly alive with steam vents, sulphuric gas emissions and mud pools. Occasionally (about once a year), the underground steam build-up causes an eruption. The very visible craters are testimony to this, some small and some really quite big.

While carefully placed, the walkway has had to be changed over time to skirt around the remnants of Earth’s sporadic hissy fits.

The circuit finishes with a walk up and along a ridge which gives you a pretty amazing view over CotM and across to Taupo. (Or if you can’t be shagged doing that, you can take a gentler low road.)

I enjoyed this place and would return.

Back at the kiosk, a few keen people took possession of iceblocks which were slurped as we contemplated our next move. Not surprisingly it involved the lake.