A few months ago I notched up my 10th year of living in Wellington and realised I still hadn’t been to Kapiti Island.

One of the region’s best regarded features, Kapiti Island is a beautiful nature reserve managed by the Department of Conservation and is renowned as a bird sanctuary. Its iconic profile is prominent as you drive along State Highway 1.

Why had I been so slack? It’s not like it’s far away, being only a few kms off Paraparaumu Beach on the Kapiti Coast, which on a good day is about 45 mins drive north from Wellington city. But quite often it’s the stuff on your doorstep you don’t get round to doing.

I did try once before, a few years ago. The logistics involve booking a permit, a ferry ride that is quite weather sensitive, and an early start. The sailings were cancelled on the day I booked and I never got round to rescheduling.

What finally spurred me into action was a hefty price increase! With a short time horizon, Mike and I synchronised calendars and booked. But this attempt was another dud as the early morning phone call confirmed the ferry was again cancelled. We were down to just one more compatible day before the price hike.

And finally, a slightly kinder forecast meant that it was on. Early one Sunday in late January we shot off up the coast to find the Kapiti Boating Club.

On account of the looming price rise, the charter company said this was their biggest ever day for passengers. As a result they had to run a second early sailing and we had been put on the second. I wasn’t too happy about that as our return time was unchanged meaning we’d have less time on the island. I wanted to walk up to the highest point and the published times suggested this was going to be pretty tight.

A sperm whale had beached here not long before our visit. The carcass had been taken for burial but a sign remained warning about possible nasties

When it was time we all walked across the beach to the boat, still on its trailer at that stage. The launching process was unusual in that regard but soon enough we were making our way across the choppy waters.

Boarding the ferry. The boats are launched off the beach using tractors

There are two destinations on Kapiti Island to choose from. We were going to Rangatira, roughly half way along the eastern shore, where up to 50 people can visit per day. Turns out we were the only two of our sailing getting off here. North End is the other stop where 18 visitors per day are permitted.

With time a bit scarce I was keen to find the track and get going. But first we sat through the talk, which went a bit quicker with just the two of us. She said the previous session was with 40 people.

Which got us thinking. Maybe our later arrival would be to our advantage as we wouldn’t be caught up with the ‘crowds’.

Finally we were released. There are two paths up to the top: the 3.8km Wilkinson Track and the 2km Trig Track. The brochure said they take the same amount of time. We tossed the figurative coin and turned up the longer track.

Later on we’d thank ourselves we did. 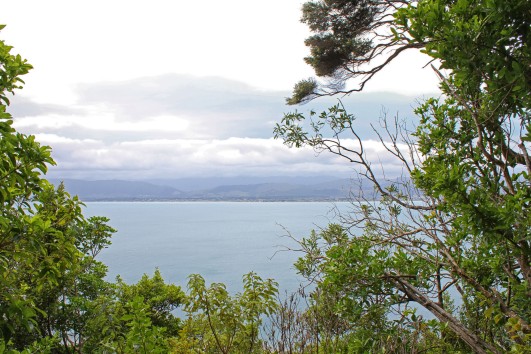 A peek across to the mainland

Zig zagging up the Wilkinson Track 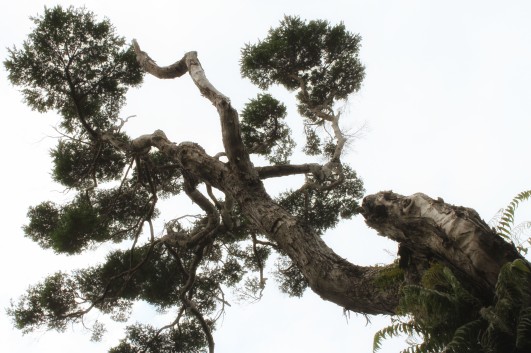 It was a beautiful walk. We’d get the occasional peak out across the water but for the most part we were enclosed in some of the most gorgeous native bush you’ll find in NZ. We didn’t make too much effort to find or see birds, that wasn’t really why we were there, so unless they jumped out and waved hello (which they didn’t) we would be oblivious to their presence. 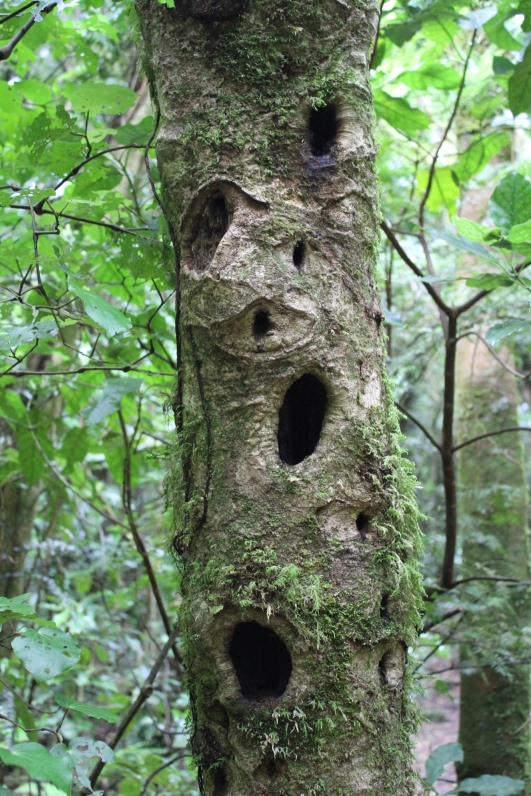 After powering up the hill, pausing numerous times for photos, passing a couple of rowdy family groups, we came to the intersection where both tracks meet and you make the final trudge up to the summit.

We arrived at the summit well inside the two hour guideline, hungry and ready to sit down. Momentarily taken aback at how many people were in the small clearing, we headed on up to the trig lookout. It wasn’t the clearest of days but it was a unique vantage point here at Tuteremoana with views both west out to the Tasman Sea and east back to the mainland.

The lunch break was occupied with chewing and more weka watching.

View from Tuteremoana, the summit

Trig at the summit 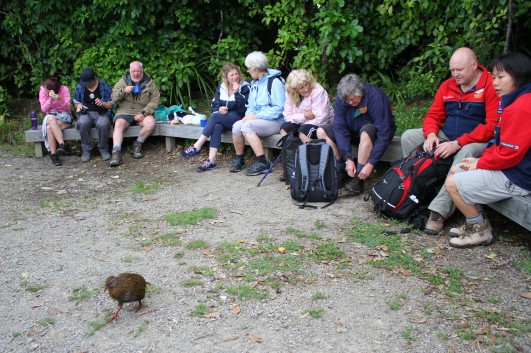 Quite crowded at the top

With an eye on the clock we didn’t stay too long, keen to get back down and explore the flat. Mike suggested we take the Trig Track and yep, that seemed a good idea to me. Of course I didn’t know then what I would soon be finding out.