I didn’t know much about Da Nang, and the scant knowledge I did have was down to war related associations portrayed on televisions shows when I was growing up. Before the trip a light bit of research indicated it would be worth a brief stop-off. The usual see, snap and run.

My uninspiring but cheap hotel was about 10km away from the beachfront. After arriving off the train I went to investigate the other side of the Han River and for the first time during the trip I was aware of locals eyeing me like the unusual sight I guess I was. The riverfront area was quite appealing and beyond it I found local neighbourhoods well off the beaten path for the majority of tourists.

Since I wasn’t going to cover much on foot I organised a motorbike tour the following day with the brother of the girl on the front desk. He ran a travel agency and spoke pretty good English. It was a nice change to nip around on a bike and a number of the snaps below were just quickies taken on the fly.

We went past an old military site. Tran, my guide, said the Vietnamese army now use the land and while I could take a photo of the old hangars near the road, I wasn’t allowed to of the gun emplacements further along (which as we rode past looked to have hardware installed).

On the Han River Bridge

From the east bank of the Han River

Selfie on the go. How styley is that helmet then…

A short way out of town are the Marble Mountains, a cluster of large rugged hills made from limestone and you can probably guess the other type of rock. At the base is a small city of shops selling sculptures from harvested stone (though I think now they’ve put a stop to local extraction) but the main feature is the protected mountain with several temples and caves built into it.

Tran left me to it. I paid 15,000 VND to enter and began to tackle the steep ascent. It came complete with a big juicy black centipede which I watched in mild horror for a few seconds.

Thuy Son Mountain was impressive and at times hazy with all the incense being burned. It seems to be a deeply spiritual place for many.

After I’d ripped round everything I found Tran and promptly got ushered into the sculpture shop next door. Clearly I wasn’t in the market for marble pillars for the driveway at home but did get a good deal on a couple of elephant bookends which I’m looking at as I prepare this post. 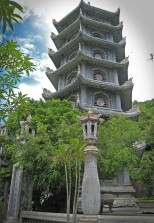 One of the many caves

It was a very steep climb! 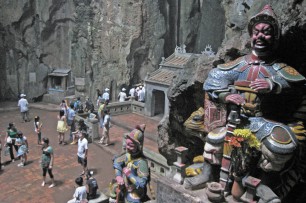 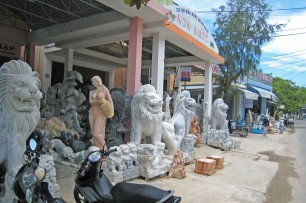 We stopped at China Beach (aka My Khe Beach), a name I remembered well from watching the tv series as a teenager. It was too hot to linger but I did walk along the beach a ways.

I also wanted to ride up and around Son Tra Peninsula but it was much bigger than I had appreciated and maybe not something to tackle on a scooter. The main peak was known as Monkey Mountain by the Americans, who installed radars and whatnot on it, and I had hoped I might be able to see some traces of that. But no.

Like the coastline between Da Nang and Hoi An, more resorts were being built around what still seemed a fairly pristine peninsula. Given the economic woes of the world, I wonder if any got completed.

On the way back into town we rode over a big new bridge that had opened only a few days before to help link the peninsula with Da Nang.

Looking over to the peninsula

Looking back to Da Nang 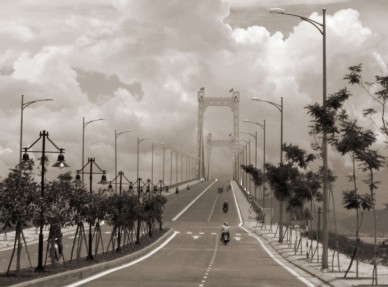 The 67m tall statue of Quan Am, Goddess of Mercy

And that was the end of the tour. A little later in the afternoon I went out to the airport. I was to have flown back to Saigon in the morning but brought it forward so that I could fit in some unfinished business before flying home. 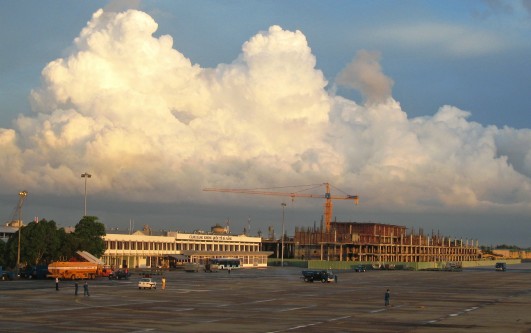