This weekend is the NZ round of the Australian V8 Supercars at the Pukekohe circuit near Auckland. Since I’m not able to be there, I felt compelled to dig into the archives.

After hosting the Supercars for the first few years when the NZ round was born, the event returned (to the surprise and celebration of many) to its first home after five years in Hamilton in a street race format.

I went to each of the Pukekohe events in my capacity as flag marshal, a beloved voluntary position I’d filled since 1992. By the time the V8s came to our shores, I was a point chief (like a team leader) and SO excited and proud to be helping make the event a success.

Below are a few snapshots from 2006 and 2007, the last two years before the event relocated. Aside from a couple taken by Mike who was on the scene for the 2007 race, there are none of the actual racing (marshals taking photos during races is a bit of a no-no, especially at high profile meetings), but they’ve brought back happy memories of what we do behind the scenes. With what I’ve seen televised so far this weekend, I’m really missing being part of it.

Getting a ride out to our flag point

A parade (HOG I think) circulating. This was the last time we had clear views up the back straight – the next year a huge fence went up (safety and all that). And the view in 2013 has changed again with the introduction of a chicane 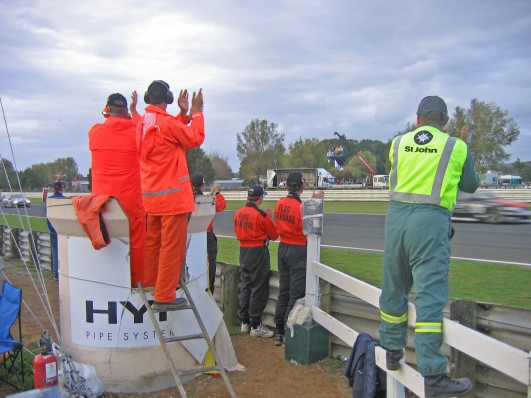 The job includes dressing oil and clearing debris from the track – very occasionally, with a ‘helpful’ audience 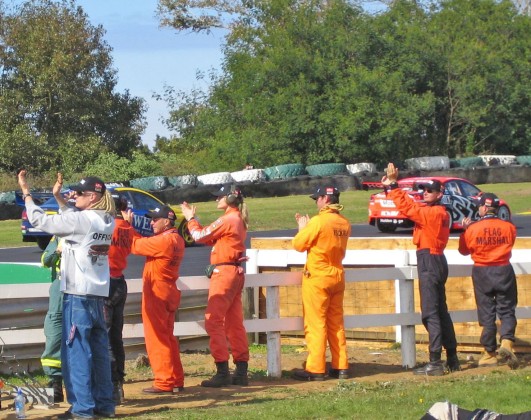