Mike’s friend in Queenstown planted the seed a few months ago.
He suggested Mike do a mountain bike event there.
Mike was keen.
Initially I was impassive. But a few days later I looked it up.
You know the feeling when you just know you have to do something?
So I invited myself. After all, it was in my favourite part of the country.
Hopefully I wouldn’t cramp the boys’ style.

The event had run for the past few years but neither of us had heard of it before.
The Motatapu.
It would be a challenge.
We don’t ride regularly, me in particular.
And I’m not awesomely confident in the saddle.
But we had some time to get ready.

All was going to plan until the wheels came off, so to speak.
I badly sprained my wrist in Dec. Mike badly bruised his ribs in Jan.
We couldn’t ride for two and one months respectively.
So we did what we could.

The second weekend in March arrived.
We flew to Queenstown with our bikes on Friday morning.
We were here at New Year and it was fantastic to be back so soon.
In better weather this time!
A relaxing build-up to race day, or should that be ride day.

Saturday dawned early for competitors and participants.
We were staying with Ants and family, Ants being one of the riders.
His truck was our transportation.
From Queenstown we had to travel the Crown Range Rd to Wanaka.
A spot of breakfast there was planned before heading to Glendhu.
We picked up the team manager and two other riders.

All was going to plan until the wheels came off, so to speak.
The truck broke down, probably a broken transmission.
Bad news for the truck, Ants and basically all of us.
Thoughts of a fortifying cafe breakfast were abandoned.

We concentrated on simply getting to the start line.
Thumbs were thrust out at the stream of race (ride) traffic going by.
Within half a minute, three cars had stopped.
I squeezed into one car, my bike squeezed onto another.
In theory we would all meet up at Glendhu.
The broken truck would have to stay there. 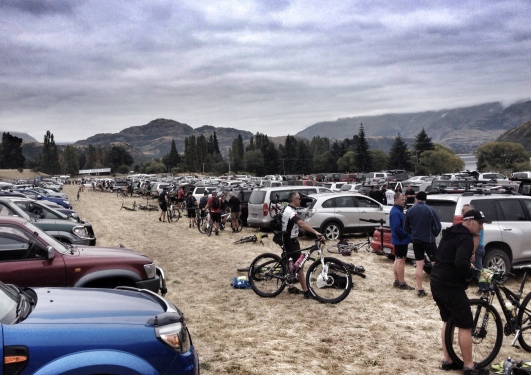 Rows and rows of cars and bikes. Eventually Mike and others arrived – most importantly, they were bearing coffee

Final preparations were made.
We sculled coffee and wolfed down improvised breakfast.
We collected race numbers and attached them.
We sorted out snacks to transfer into pockets.
We went for a nervous walk or two.
All the while surveying what was a pretty amazing occasion.

The unique course is set in the stunning Otago high country.
It starts at Glendhu on the shore of Lake Wanaka.
From there it winds on metal road and farm tracks through private land.
The finish line is 47km away in Arrowtown.

Today wasn’t just about a mountain bike ride though.
There were also marathon, mountain run, triathlon and multisport events.
Something for everyone??
Something for each of the 3700+ competitors, at least.

Our build up wasn’t perfect but can’t do much about that now!

We had extra time to kill.
A bus driver for the marathon runners hadn’t turn up.
He put the whole event half an hour behind.
A blip in an otherwise very professional setup.

Eventually we dispersed to wait with our respective start groups.
In theory we would all meet up in Arrowtown.
I listened as the groups ahead of mine were sent on their way.
The butterflies gathered momentum.

We’re off! Recreational 2 group is underway. I can’t really ride one-handed let alone take photos with the other hand, so I stopped to take the other shots

Dazzling sun finally burned away the cloud cover.
We’d be riding in the hottest part of the day.
Nothing for it though to get down to business.
My pace felt a bit casual – certainly more ‘ride’ than ‘race’.
But I didn’t really know what was ahead.
Steady she goes, my motto could have been. 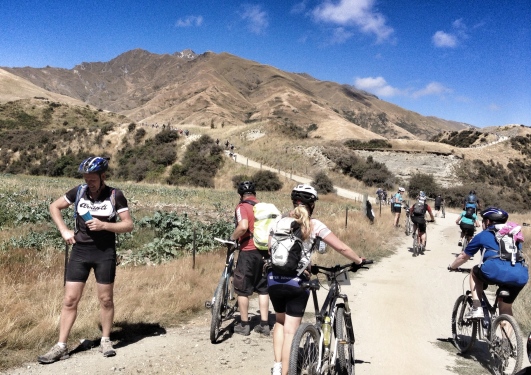 “Don’t underestimate how often you’ll need to get off your bike.”
This was one of the PA announcements before we started.
A few k’s in this prophecy began to bear true.
The course rose about 600m, but there was plenty of up-down-up-down.
I don’t suck too badly uphill but I was surprised how often I had to dismount.
Negotiating loose surfaces and other riders was tricky.
Worn muscles could’ve had something to do with it too. 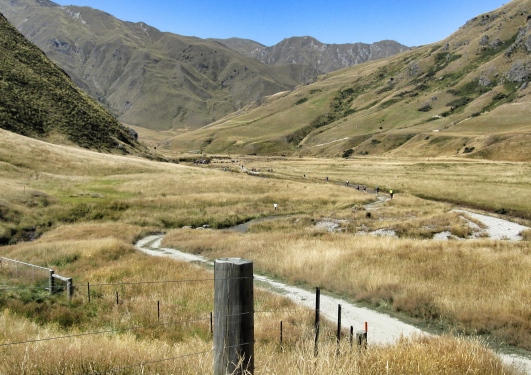 The landscape was amazing. Like, amazing.
Big hills all around. Tussock. Brown on brown. Tinges of green.
Blue sky.
Later Mike said he didn’t really notice the scenery.
He was head down pretty much all the way.
I struggle to understand that!

One of the many water crossings. (Image purchased from MMPro.)

Good weather it may have been but we all had to carry extra layers.
The climate here ranges a very wide spectrum.
When it’s mean, it’s mean.
A week or two later Queenstown dipped briefly to low single digits.
Today it definitely wasn’t. 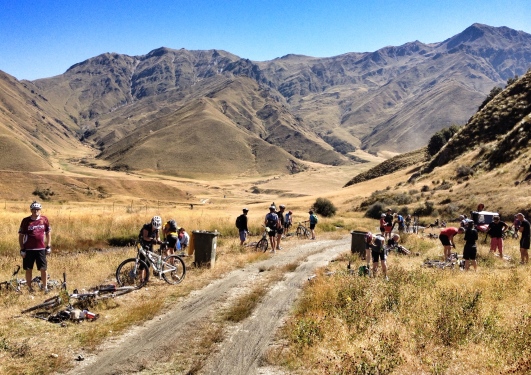 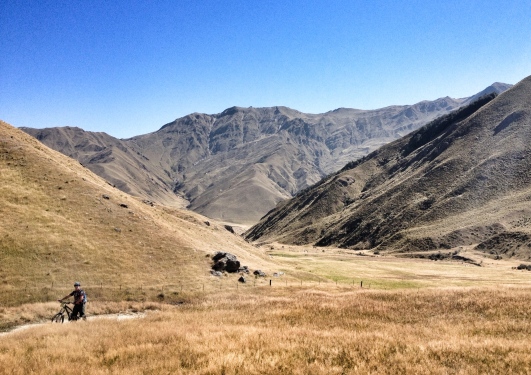 The hills kept coming.
What goes down must go up, it seemed.
And sometimes the downhill, providing relief you’d think, was a bit ‘too down’.
Beyond a certain gradient and I’m a bit of a wuss.

I realised my bike was not really up to it.
Rough was an understatement over some parts of the course.
At times it was all I could do to hold on and hear my bones rattle.
I acquired a bruise somewhere you never want to acquire a bruise.

“Ya ‘right?” asked one of the bike mechanics as he swooshed downhill.
(Effortlessly.)
He had heard me swear out loud as my head was almost shaken off my neck.
“Yeah.”

Never again, I said to myself. More than once.
But then I thought, what if I had a full-suspension bike?
On the bright side: No cramp. No mechanical problems. Good energy.
(Could have pushed harder in hindsight.)

Then, finally, just 2km to go. A sprint finish!, I thought.
Not exactly.
There was one main obstacle left: the Arrow River.
We had to cross it several times.
It was nice and refreshing though.

Then, finally, people and finishing chutes appeared.
A big crowd was gathered around the last big water crossing.
“$%*@$!!” I thought.
I had to cycle through this one.
Hundreds of people had gone through ahead of me. It was muddy.
Depth, unknown.
But bugger me, I nailed it.

The last hundred or so metres were a bit surreal.
I crossed the line.
They thrust a finisher’s bag and bottle of Powerade into my grasp.
Mike was there to meet me. I climbed off unsteadily.
The time showed almost six hours.
“$%*@$!!” I thought.
But that was the elapsed time since the elite class began their race.
So I was relieved when the next day I found out my actual time.

Finally! It took me 4h 47m, laughable when you consider the winner was more than 3 hours quicker! But hey. (Image purchased from MMPro.)

The Motatapu is a brilliant event and an excellent experience.
One that my muscles reminded me of for the next few days.
Would I do it again?
Maybe; I know that I could improve a lot if:
– I got a new bike (ugh)
– I had a more consistent training regime (provided I don’t do anything stupid again)
– I worked on my technical skills (e.g. downhill)
– I went a bit harder throughout
– I didn’t stop for photos (aghh!!!) 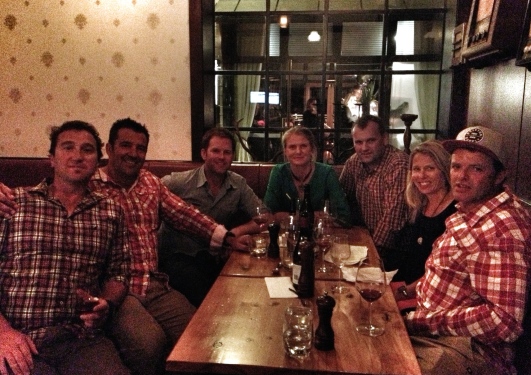 That night weary bones were taken out to celebrate.
Nothing like a day of physical exertion to make one feel righteous about such things.
A great end to a great day.
And we still had two more days to enjoy in Queenstown.