The south of the South

Bye Manapouri! We were going south, the most south I’d been in this country.

Another blah day greeted us but we were actually quite lucky. Heavy rains and flooded rivers wiped out a bridge or two and closed roads along the West Coast a couple of days after we went through, and other parts of southland were getting hammered by rain.

The roads were very, very quiet.

We were hanging out for breakfast when we reached this small town near the south coast. A cafe-museum-shop looked like it would do the job and it did. Mike got to try his first cheese roll of the trip, iconic Southland fare sometimes referred to as ‘southern sushi’. I noted as we drove out that heritage murals are part of the town’s aesthetic (nice job on the public loos), and the humble sausage is apparently a big thing in these parts. 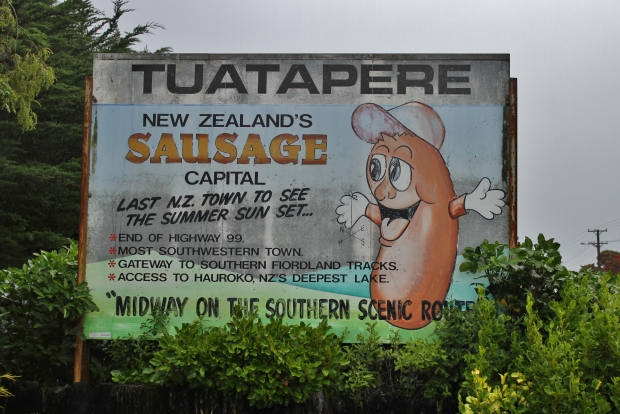 The first lookout point when we reached the coast was an obvious stop despite the miserable weather. A strong and very cold southerly wind (and rain to boot) meant we didn’t linger, but it didn’t dampen our enjoyment at being in Southland.

Friends in Queenstown had told us about this and if not for that, we would have sailed on by none the wiser. You can read the sign below, but basically varieties of coloured stone get washed onto the beach after storms. We went fossicking and picked up a few that caught our fancy. 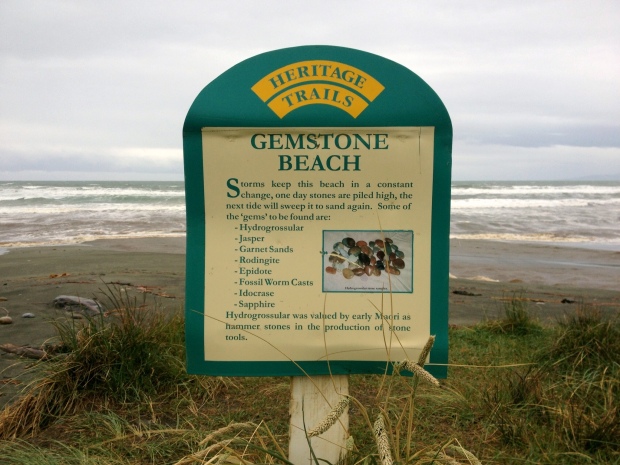 A bit further along the road, someone’s day had been ruined courtesy of the greasy roads. 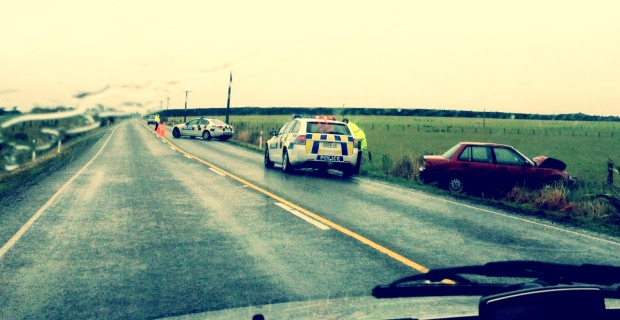 The Queenstown friends had bought a section near here so we detoured to have a nosey. The island is more a rocky knob but one that you can walk to at low tide (which it happened to be when we visited) and in earlier times it was used by Maori to look for whales. With no primates anywhere around the name is likely more attributed to the monkey winches used to bring boats ashore back when supplies could only be delivered by boat.

Originally established as a whaling station, times have well and truly marched on and some endearingly refer to this as the Southland Riviera. We wouldn’t be around long enough to form any special bond with the place but it is renowned for its spectacular natural beauty so we might just have to come back. Surfing is also quite big here. 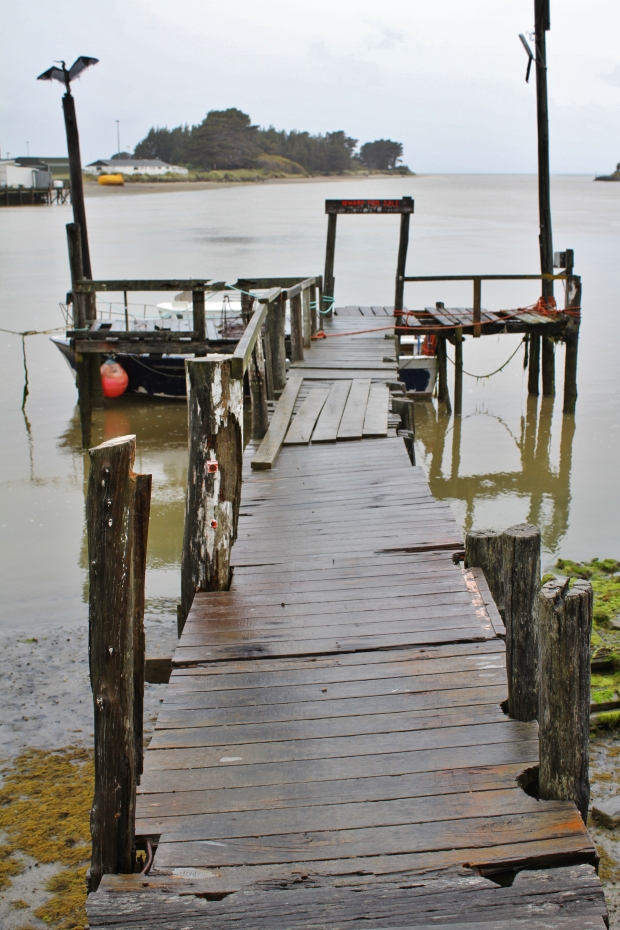 Forty or so minutes away is Invercargill, NZ’s southernmost city (and one of the world’s for that matter). We stopped only to get groceries. I do want to have more of a look here and to also visit Bluff, but this time getting to the Catlins was the main priority. Stewart Island, at the bottom of New Zealand, is on my to do list so that will be when I delve further into this area.

A little later we drove by a stream with whitebait huts dotting its banks. An eyecatching sight, I was initially foiled by the no stopping signs so we did a couple of drive-bys and I snapped a few from the moving car.

Fortrose is one of the boundaries of the region known as the Catlins and is another settlement with origins back to the days of whaling. We made a couple of random stops, one being an unsuccessful attempt to find the 1886 wreck of the steamship Ino. Never mind, we saw some beautiful windswept coastline. 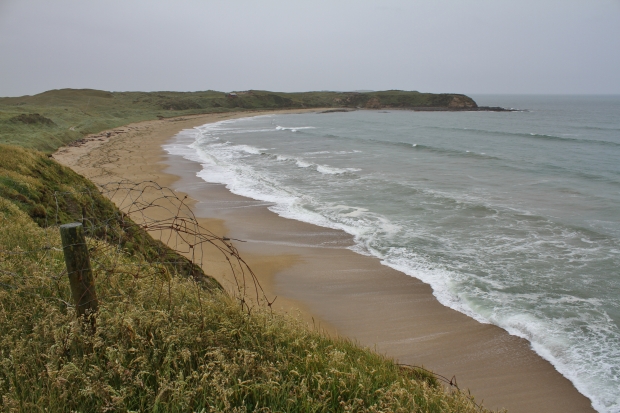 There’s enough here to make one get out of the car for a good half hour or more. One of NZ’s last two wooden-built lighthouses was erected here in 1884 following the country’s worst civilian maritime disaster. The lighthouse has been renovated in recent years and looks great, its double skin of the native timbers kauri and totara set to remain for many decades yet. A lighthouse keeper was on site here until 1976 when the era of automation arrived, and near the lighthouse are traces of where the keeper’s house stood.

Waipapa is one example of the European bastardisation (if not total replacement) of early names, the original Maori name being Waipapapa (‘basket of seafood’).

Here we saw the first examples of the extremely windblown trees that the region is famous for. 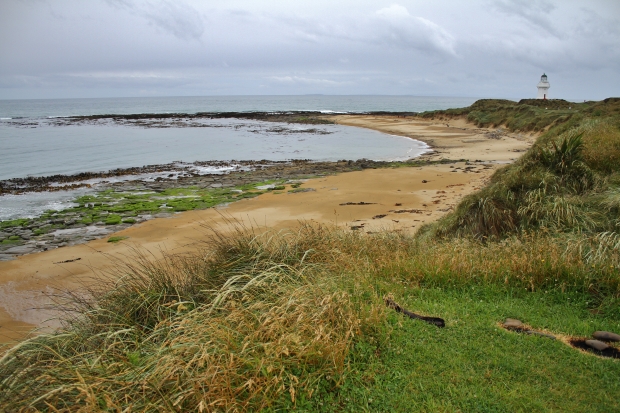 A demonstration of the wind

Above I alluded to a shipwreck off the Waipapa Point coast. In 1881 the passenger steamer Tararua wrecked on a reef, resulting in 131 lives lost. Only 20 people survived. A disaster like that in a remote place like this would have been extremely challenging and consequently, many of the bodies were buried just inland from where they were recovered. This place is called the Tararua Acre and the farmer permits access to it through a paddock – just mind the sheep and their ‘outputs’. 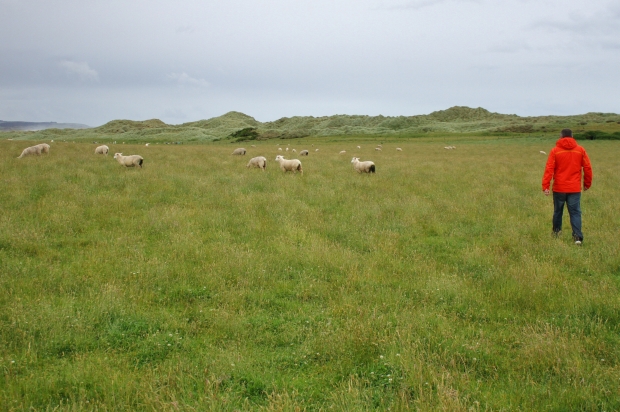 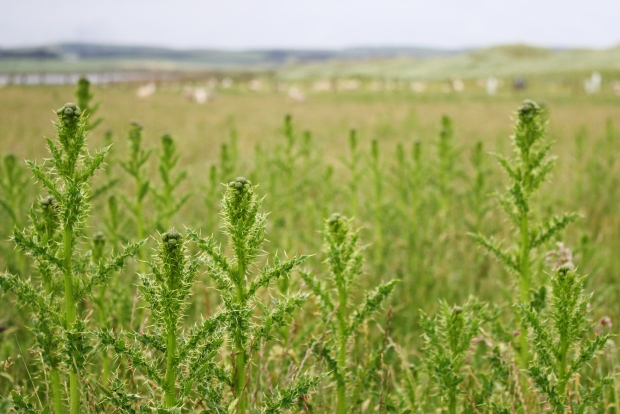 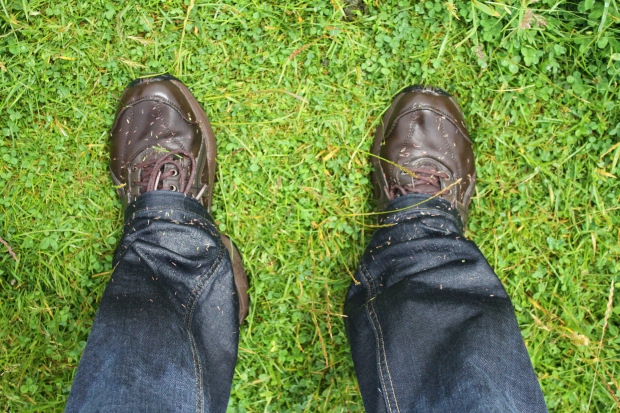 We carried on, enjoying the southern scenery.

The southern-most point of the South Island was a must-visit. We stopped nearby for a picnic lunch first, watching gulls come and go from the cliff face. I don’t really do heights so I tend to keep a respectful distance back– by comparison Mike almost does a little happy jig along the top. 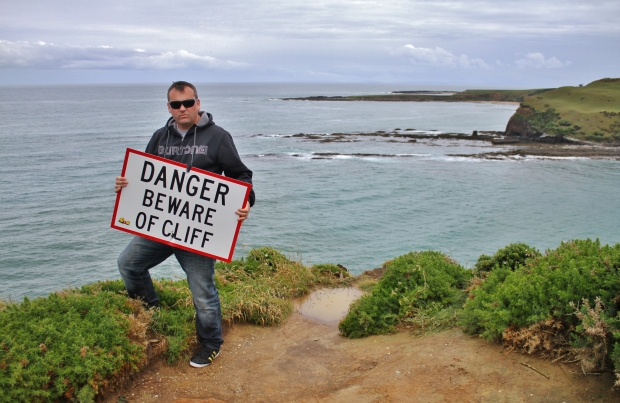 A 15 minute walk is required to get to Slope Point which was equally as interesting as the reason for the walk, with views of rolling farmland and coastal vegetation. 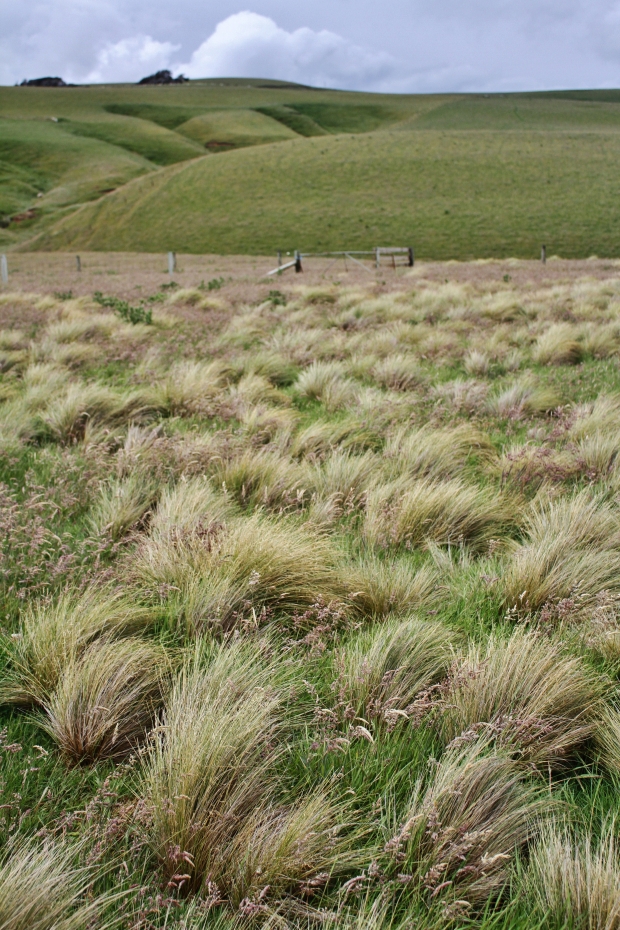 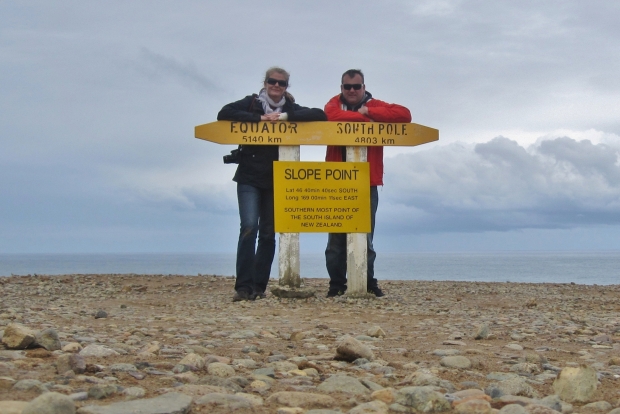 I warned Mike to mind the dirt as it was quite slippery. And what do I do a few minutes later? Not quite arse over but dropped to my knees faster than I knew what was happening. At least the ground was softish so the camera merely got a bit grubby, and I did no further harm to my injured wrist. 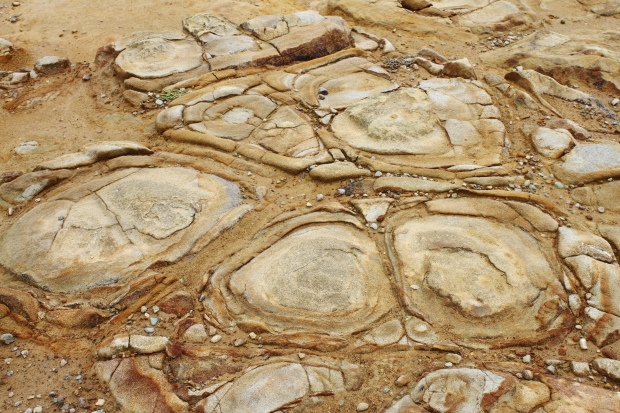 We saw more clusters of striking windswept trees, which were often planted as shelter belts for the dwellings of early settlers. 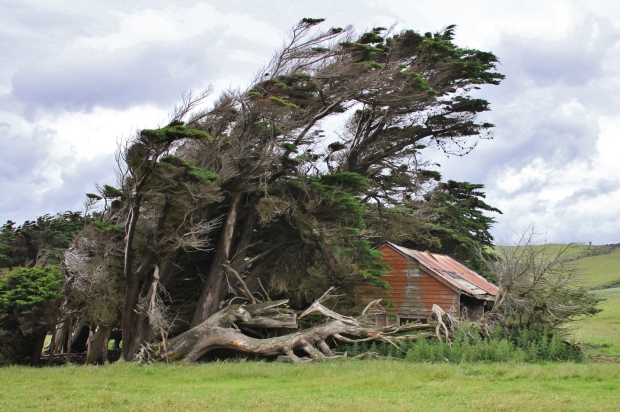 From here we went to the Curio Bay and its neighbour Porpoise Bay, our stop for the night. It’s such a fantastic place that it needs a whole post of its own!