History in the making in NZ’s far north

Dad was keen to get home when we did so that he could go to a reunion of ex-Vietnam servicemen. These events happen every couple of years or so and are well supported by many veterans who enjoy the opportunity to catch up with men they served alongside more than 40 years ago.

Mum has always gone to these events and in recent years, my brother and I have tagged along for parts as well. Kyle and I have always been interested in this segment of dad’s life, with early memories of looking through the photo albums and slides of his time in South East Asia. I visited Vietnam three years ago and went to the area where the Kiwis had predominantly been based and am part way through recounting that trip in this blog.

Anyhoo… the reunion this time was to be held in the Bay of Islands in Northland. Of particular significance, the memorial parade and service on Sunday would be held on the Waitangi Treaty Grounds; only the second time a unit had been invited to march there.

Waitangi is one of the most significant places in NZ being where the country as it is today was in a sense ‘born’. In 1840, members of the British Crown, together with more than 500 Maori chiefs, signed a treaty which ultimately gave Britain sovereignty over NZ and retained certain rights for Maori. It has been the subject of endless controversy and debate since. Waitangi is where the initial signatures were gathered.

A few months out it was confirmed that dad and Kyle would go to the reunion as mum would still be overseas. I wanted to be there for Sunday morning and so I secretly plotted. It coincided with the time Mike and I would be in Auckland and was a doable deviation to the north. Luckily Mike was keen, so I moved our flights out by half a day and booked a rental car.

Fast forward to Auckland. We hit the road in our small underpowered car late Saturday avo for the 3 hour drive north. My stamina was poor (we’ll blame jetlag and birthday indulgences) and I had to hand the wheel to Mike part way lest I drove us off the road. We arrived in Paihia in darkness. This area is a big holiday destination and it was a shame we wouldn’t be around to enjoy it for long.

In the morning we had to leave quite early. At least it was daylight and the pies we found on the way for breakfast went down a treat.

Once parked, we joined a ragtag procession of others up the road to where the veterans were assembling for the walk onto the Waitangi grounds. It wasn’t long before I saw the large form of my father. He soon looked over and did a bit of a double take when he saw me. Surpriiise! A good surprise – I think.

Mike and I went through to the vast lawn area and soon saw the large form of my brother. After the usual brotherly-sisterly greetings and put-downs we wandered around and waited for proceedings to start.

Half of the memorial crosses on display, one for each of the 37 NZ military personnel who died during the Vietnam War 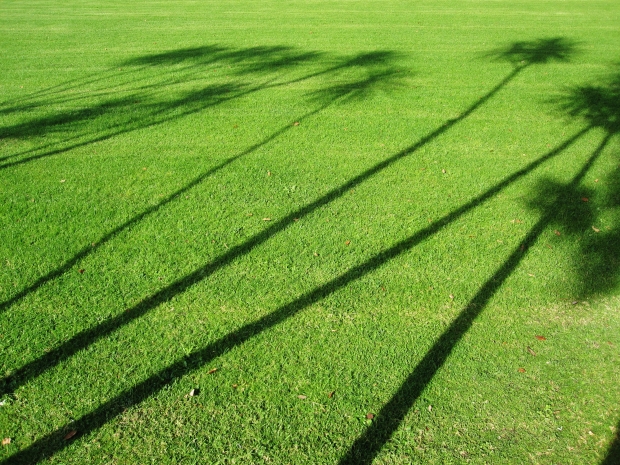 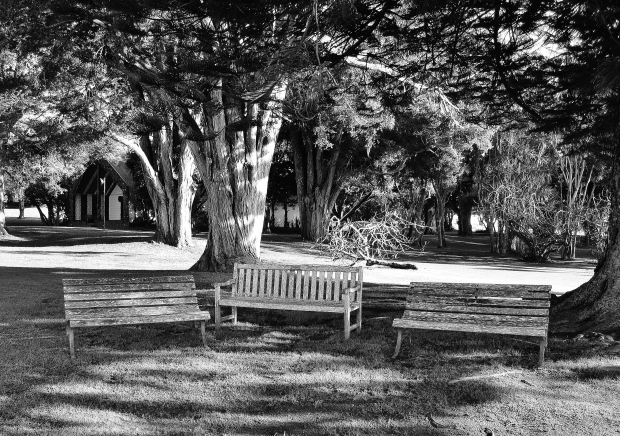 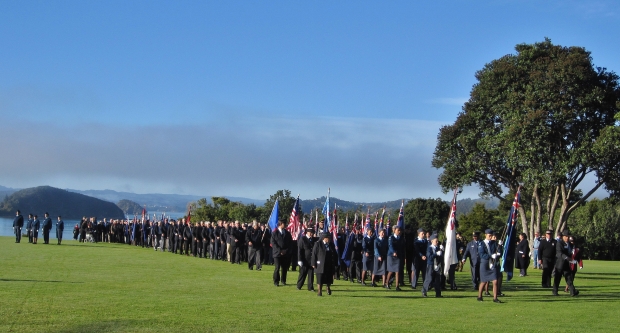 Memorial flag bearers in a semi circle around the Waitangi flagpole 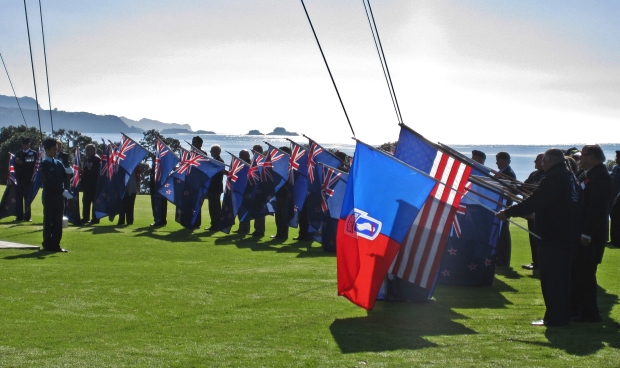 The flags were lowered as the roll of honour was called

After formalities concluded they assembled for group photos (eventually; it had the appearance of cats being herded). We caught up with dad though not for long as we had to get going. I exchanged a final insult of endearment with my brother, and we left, walking back across the grounds and down beside the beach. Here we were able to catch up with the Iriquois.

Vets in front of the Meeting House 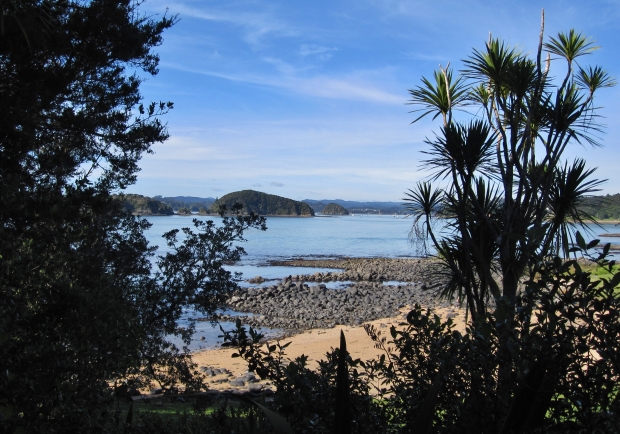 The Huey landed on the grounds of the hotel below Waitangi and stayed for a couple of hours. Quite a number of the Vets took the opportunity to reacquaint themselves with the helicopter, swarming inside and around it

Undoubtedly these machines are one of the enduring icons of the Vietnam War and probably quite amazingly they’re still operational in NZ today. They are gradually on the way out though. At an airshow in March we had the opportunity to see the machine that will eventually be replacing them.

The final activity before heading south was a lunch date with my dear friend Janice, who moved to the area with her husband some years ago. By coincidence we had planned to meet at a cafe very nearby.

Janice, me and a smiley statue fella

So it was a very rewarding side trip. And a few hours later, after the drive back to Auckland and the short flight to Wellington, after five weeks of being away, I was home.