After finishing up at the Royal Marines Museum we made a beeline for the Historic Dockyard, located on the large Portsmouth naval base.

The dockyard is a big deal in these parts and is regarded as the home of the Royal Navy. We weren’t going to be able to see and do everything but we had a shortlist of priorities. Three of the most famous warships in history are now safely tucked up here, and we were especially keen to visit one that had been discovered to have a link with my great grandfather. 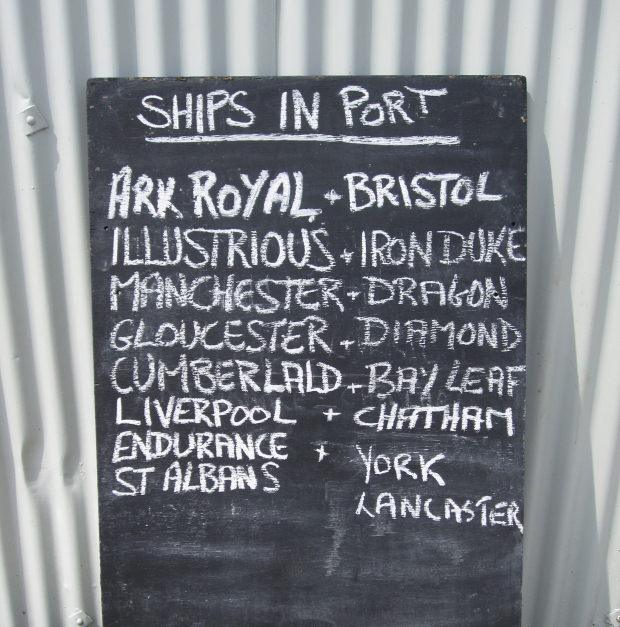 So for me the afternoon had two main highlights.

This was excellent, not too long and plenty to see. Sitting on the outside deck we were taken alongside the dockyard and base to see many of the ships berthed there. Quite a number seemed to be either out of service or not far from it and the captain’s commentary rued the gradually diminishing naval fleet. 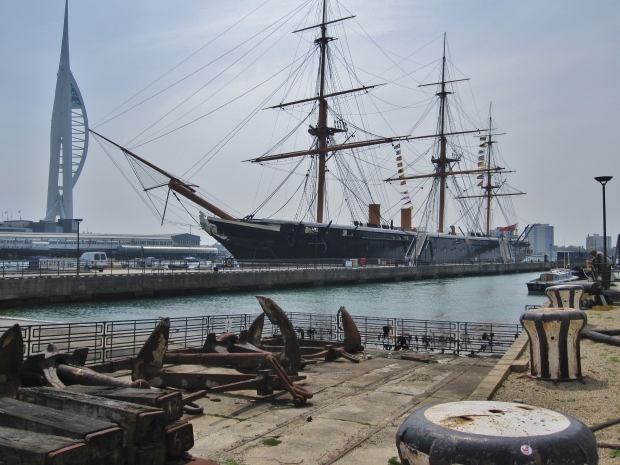 A collection of anchors, the HMS Warrior and the Spinnaker Tower as seen when heading down to join the queue for the harbour tour 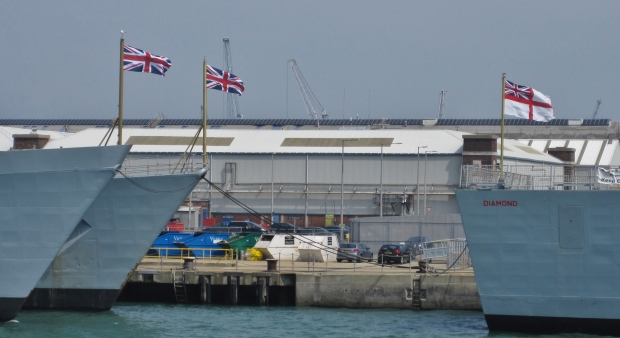 Mum and dad enjoying the jaunt around the harbour

Within a day or so of our visit this enormous section of ship, part of the HMS Queen Elizabeth, left Portsmouth for Scotland where it will be assembled.

The aircraft carrier HMS Illustrious, due to be retired in a couple of years 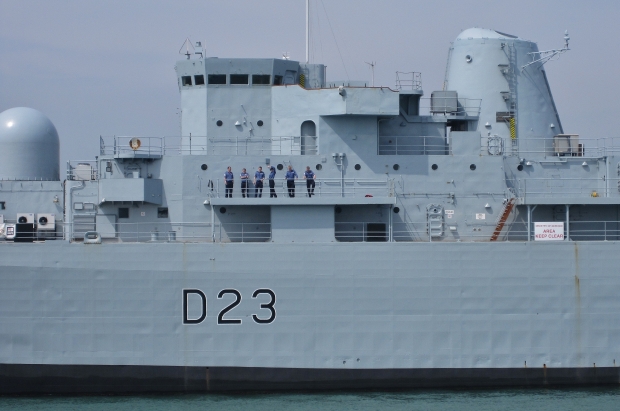 The HMS Bristol and some of her crew

2. Tour of the HMS Victory

The Victory is a bit of an old girl, having been commissioned in the 1770s. She had a long life before arriving in the dockyard in the 1920s. Of particular interest to us, my great grandfather’s time in the Royal Marines included a stint aboard the Victory. That she has been restored and opened to the public is fantastic. The ship is in dry dock and was undergoing some outer restoration at the time of our visit. 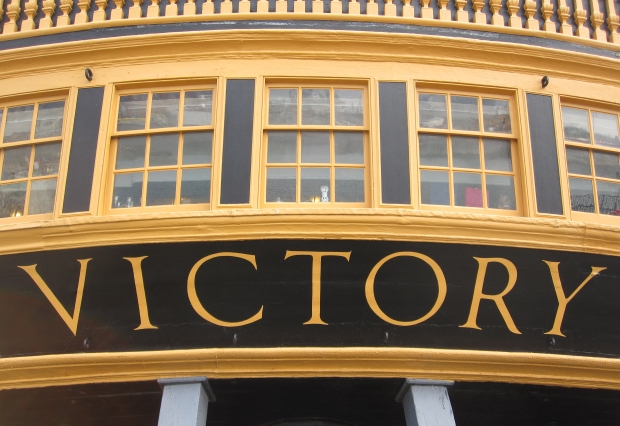 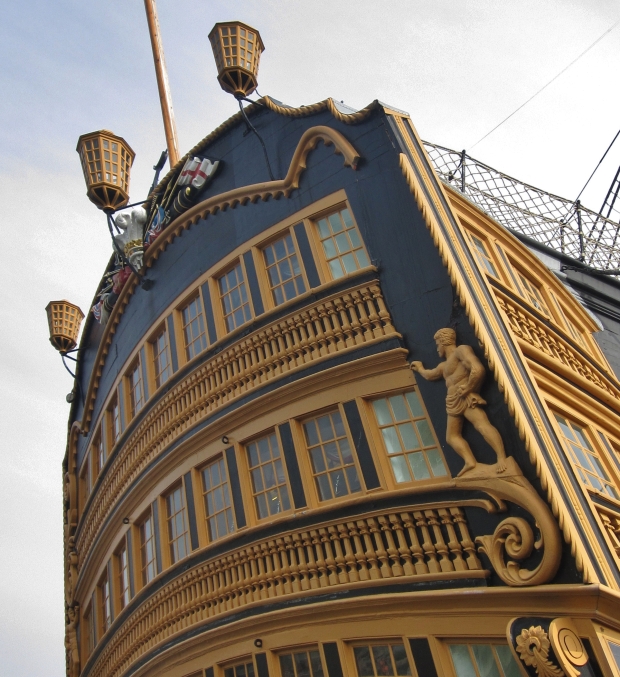 Just a tad fancier than navy ships these days 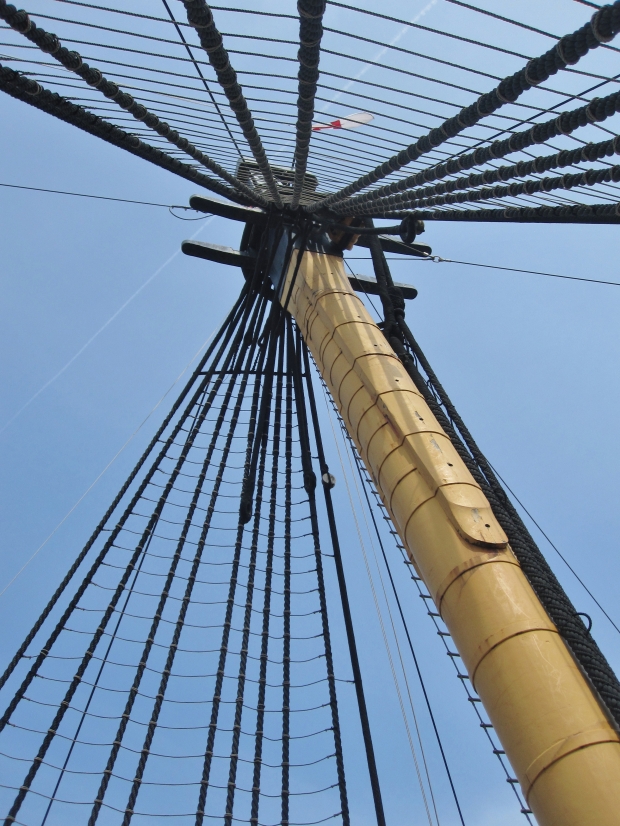 I wondered what these are… they are fire buckets, which makes sense on a big wooden boat. I think they’d make pretty good ice buckets too! 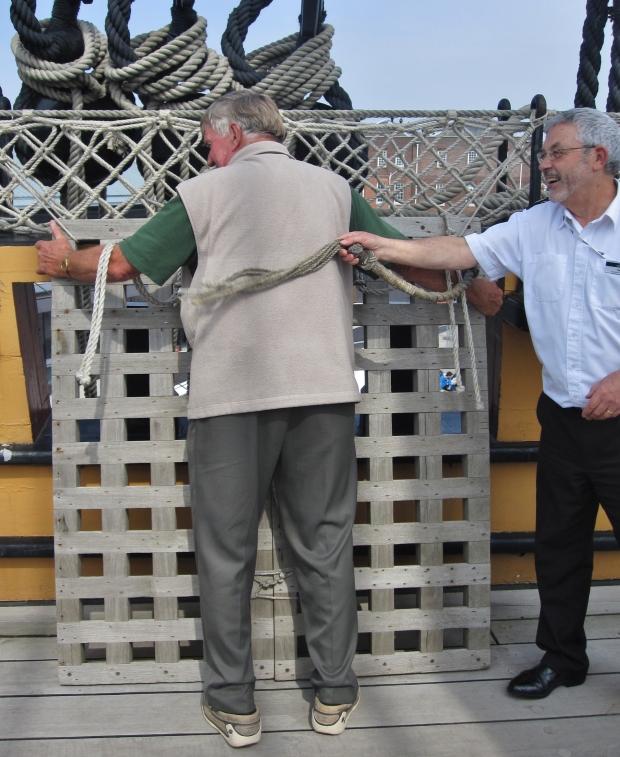 A place for naughty sailors… and fathers

Good view down to another of the dry docks where a smaller ship is also undergoing restoration. This is M33 which amazingly was involved in the Gallipoli campaign and is one of only two British warships still around which date back to WW1

Mum and I looked through all eight decks – there didn’t seem to be enough space for a full crew of over 800 men. Maybe they were quite small

There’s plenty more going on at the dockyard though we limited further explorations to general walking around and shop browsing. Plus a visit to the museum of the very very historic Mary Rose, but for me this was less interesting. 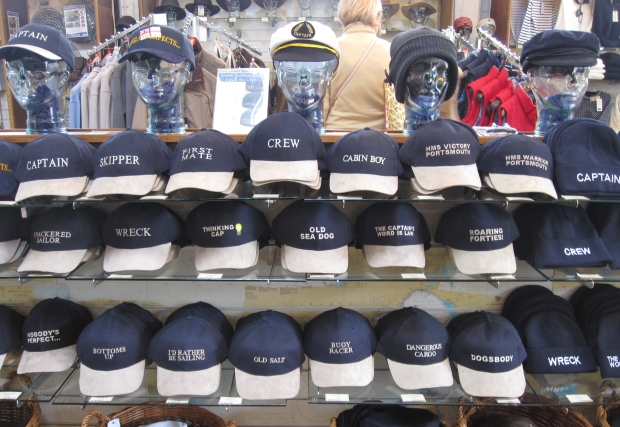 A fair treasure trove of caps at one of the dockyard gift shops. I did contemplate the white captain’s hat for Mike, as they’ve been a source of amusement since we first saw them in Venice, but unluckily for him it was a bit too expensive

Victory Gate, the main entry into the dockyard

While mum and dad finished their wandering I waited outside the main gate where there were more views of the third famous ship, the HMS Warrior. We forewent a tour due to our time constraints but she was certainly majestic to look at from afar.

And that was that. I’d definitely go back to the dockyard if I ever return to Portsmouth.