On this big day of seeing the sights I stopped for lunch in an old town area called Grassmarket. 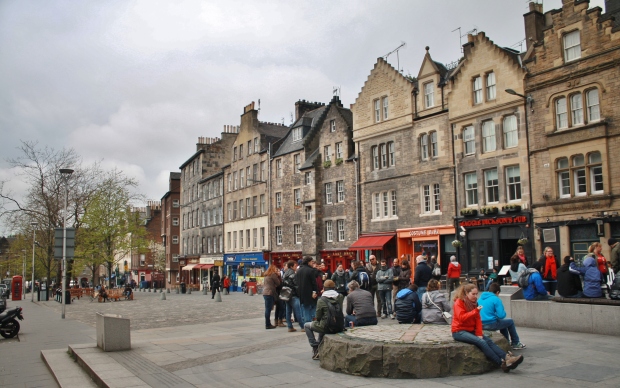 The Grassmarket, so named because between the 1400s and early 1900s it used to be the main marketplace for cattle and other grass eating animals. Public executions were also conducted there. The round thing that people are sitting on in the foreground is the former site of the gallows 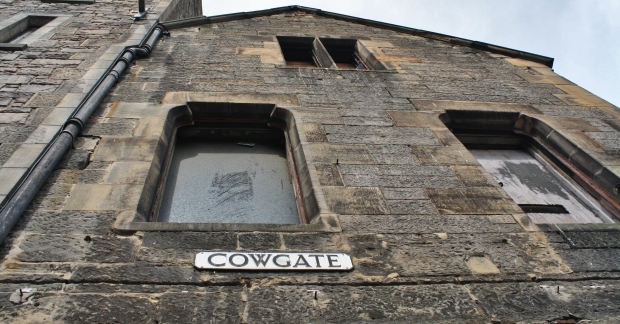 Just something I liked

You could spend hours walking around. Edinburgh is so historical and fascinating and I confess to knowing very little about that before arriving. From stone buildings to massive churches to cemeteries to cobblestone roads to little alleyways and courts. There is a big tourism influence with the shops and restaurants and the nature of many of them, but there is still plenty about the place that is authentic.

One of the many little historic access ways, called closes 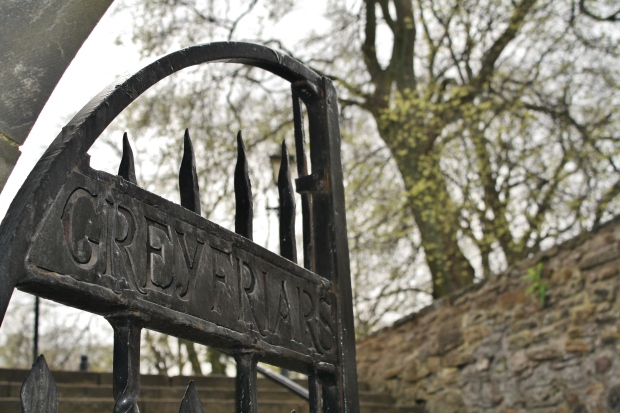 Gate to one of the old town cemeteries. Didn’t go through this one but did a couple of others and they could be my favourite feature of the city. For taking photos at least.

Quick snap from the bus of buildings on the property of the Palace of Holyroodhouse. The palace is the Queen’s official residence in Scotland though I didn’t stop here. Not sure what these buildings are.

The buildings are constructed mainly from sandstone. This turns dark grey over time and one of the tour commentaries said the buildings do not get washed because sandstone is not permanent; eventually it will revert back to sand, and washing would only speed up that process.

In contrast to all that stone, the blossoms were a nice surprise with many trees about the place still looking gorgeous. The Meadows, a large green space with historical significance (mind you just about everything in Edinburgh is historically significant), had beautiful tree lined lanes.

One of the gorgeous blossoming lanes in The Meadows

Edinburgh is a city under construction at the moment, what with big upgrade at the train station (the second busiest in Scotland), streets being ripped up for tram lines, and the preparations at the castle esplanade for the military tattoo and festival stuff in a few month, the place was a bit of a mess. Which made for distractions when trying to compose photos.

To fill in a little bit of time before the last tour of the day I climbed the Scot monument, a large gothic tower thing on the corner of Waverly Bridge and Princes St. I’m not a fan of heights, yet I appreciate a good lookout point. They have an extra bit of a carrot to draw in the tourists – the £3 admission also gives you a certificate. Along with height issues, I’m also not fantastic with small spaces. And the stairwell was very tight and winding. Very relieved I didn’t meet anyone coming the other way. I didn’t actually make it right to the top as was concerned I may miss the tour departure time… hence I altered my certificate…

My certificate for walking almost to the top

After the tour out to the River Forth I walked up to a fantastic lookout point over the city. Both these activities will be in separate posts. Suffice to say I was knackered at the end of all that and inhaled takeaways for dinner from that famous chain of ‘Scottish restaurants’.

This morning after a repeat of the previous day’s breakfast, I checked out but left the bags with them for a few hours. After more meandering through the gardens, I headed up for a date with the castle. That will also be posted separately.

There were a few more things I wanted to see before my dalliance with the city came to an end. This was conducted in a fairly leisurely manner as I felt quite poked after the big walk yesterday. More gardens, parks, bridges, cemeteries, yet more castle pictures and then that was it! I collected bags and trundled back to the station. It was time to head a little way north and meet up with mum and dad.

I noticed a couple of these blue boxes around the city and liked this one underneath the tree (shame about the construction going on behind). Have now read that they are/were called police boxes and are where beat officers used to be based from before times changed and the boxes were phased out roughly in the 1970s

Charlotte Square, closed all year except for when an annual book fair is held

I really enjoyed Edinburgh. It felt quite harsh to begin with – unfamiliar, freezing, grey and dull – but I grew fond of it. Would be happy to return there some day.