In real time my 48 hour visit to Edinburgh finished yesterday. I got around as much as I could. How to dissect it all up into blog stuff has been a geeky dilemma. A few experiences make sense to treat separately and the rest I’m going to lump into what was going to be one big post but which will now be two. There are sooooooo many photos and not oodles of time to sort them so it won’t be a perfect summary.

Anyway, now that I have finally found some internet access in St Andrews (and what a painful exercise that has been) I’d best get on with it…

Having arrived in Edinburgh I trundled off I hoped toward my accommodation, while taking in my surrounds. In some respects it was quite overwhelming. There was so much to look at, especially for someone who’s a bit keen on taking photos.

I found the Castle View Guesthouse with only a small amount of faffing. The name is accurate: from the street you look directly across and up to the castle. There were a couple of surprises. Didn’t realise it was fairly central in what they call the ‘new town’ and in amongst shops and restaurants. Also didn’t realise it was the house where author Kenneth Grahame was born. Kinda cool, Wind in the Willows was a memorable book from my childhood. As a result it is a listed building and in fairly original condition – read ‘not that flash’. My modest single (but with own bathroom!) room was on the top floor and I was very grateful to the manager who totted up the three flights of stairs with my bag like it weighed nothing.

Not sure the website was totally representative and I think they oversold themselves. Ironically I wasn’t expecting much of the London hotel and it exceeded expectations, and the opposite applied here in Edinburgh. But it worked out fine.

The first afternoon I dumped the bags and headed back out. At the bottom of the street is Princes St, below which are park and gardens which extend across to the lower reaches of the massive lump of rock on which is Edinburgh Castle. The castle, obviously a prominent feature of the city, makes for a fabulous skyline. (Except for when white service vans are parked in view. They should really paint them grey.) I meandered through the gardens and up to Waverly Bridge where the main bus departure point is.

In the Princes St gardens – signs of spring still about!

Edinburgh castle from the street below 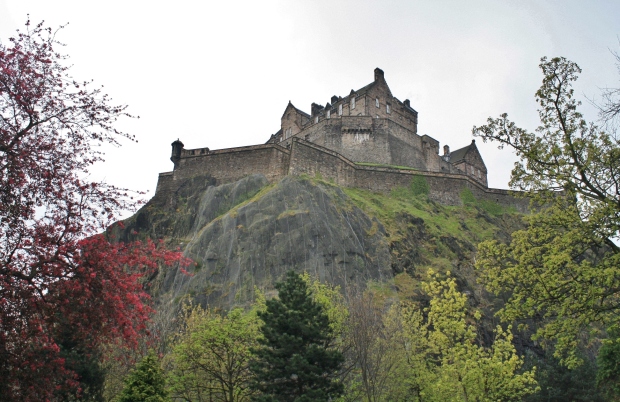 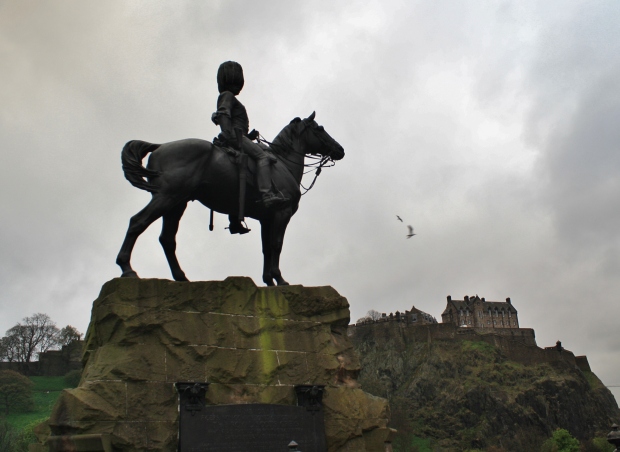 Monument to the Royal Scots Greys in the Princes St gardens. And look, that jolly castle sneaking into frame again

Nothing screams “I’m a tourist!!!!!!” quite like a hop-on hop-off bus. But they give a great overview of the place and helped orient me with the layout as well as areas I wanted to further cover on foot. I planned to do about four different routes and knocked one off on this first afternoon. Followed by more foot trails. 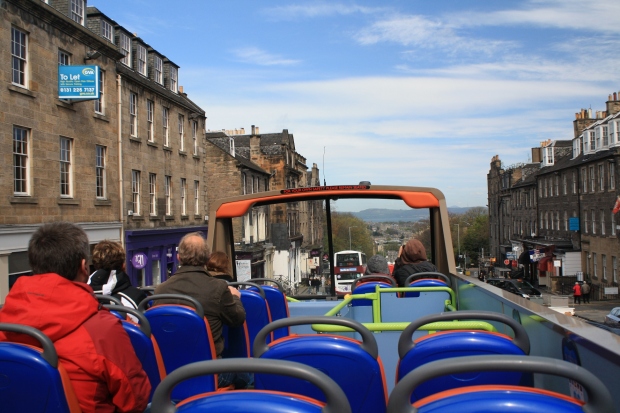 On board one of the buses! The blue sky was short lived 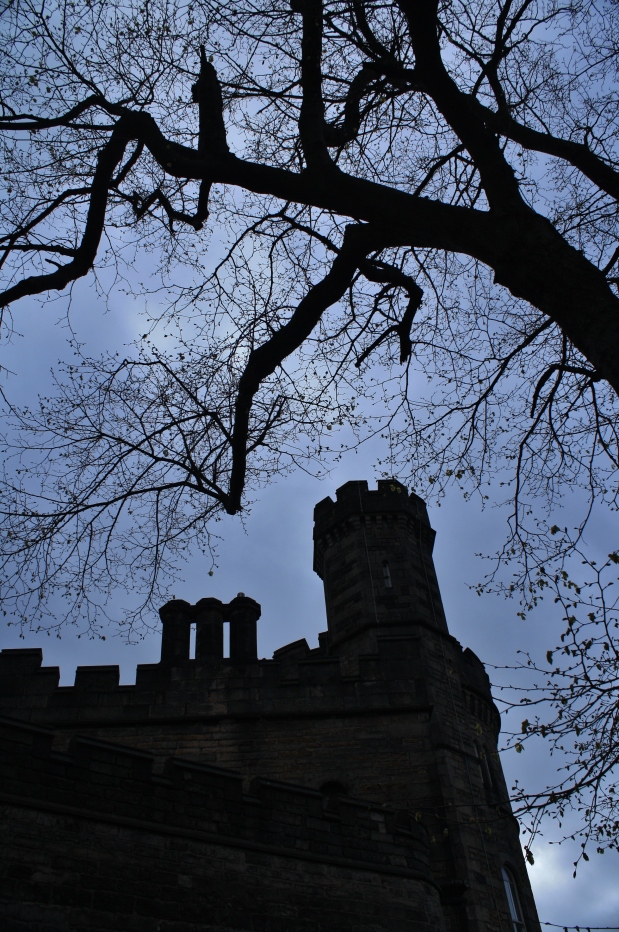 The Old Calton Cemetery was fascinating 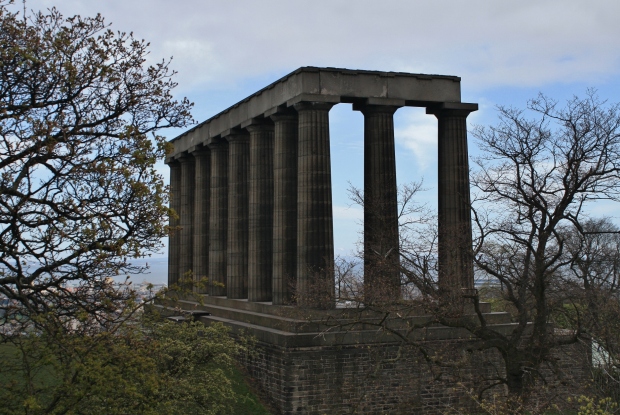 A view from up on Calton Hill

Another view from Calton Hill I think 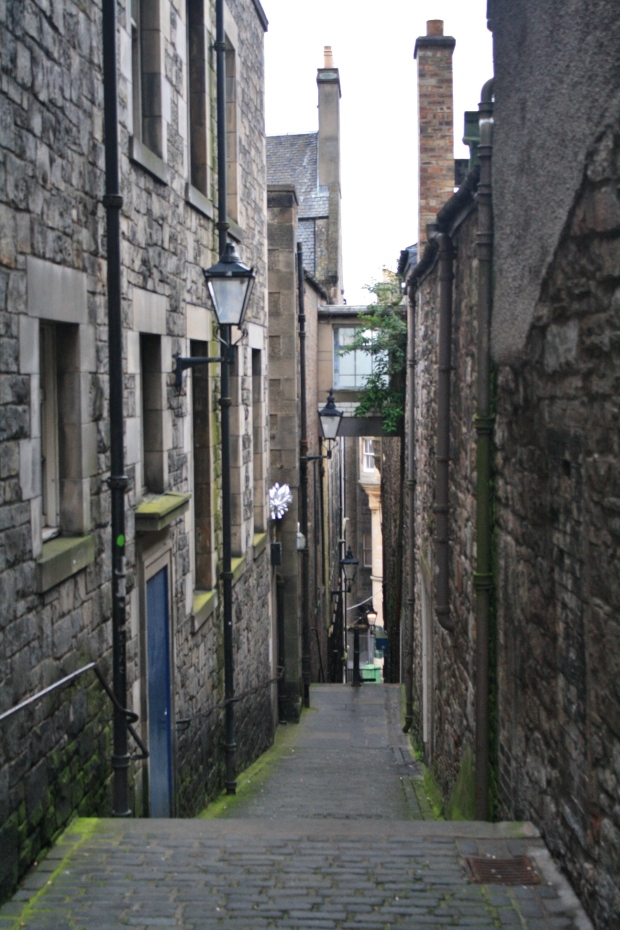 One of many such alleyways

I loved looking at the doorways 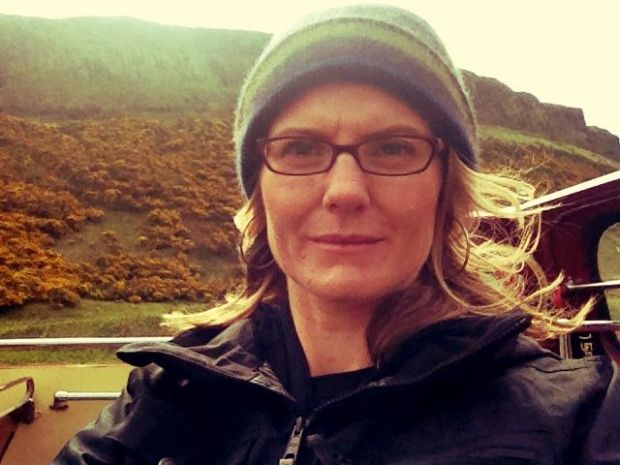 Thought I should try to insert myself into a photo. DEFINITELY needed that hat. Bus is going past the Salisbury Crags

Dinner was a filled roll which I took back to my penthouse suite. Struggled to stay up beyond 9pm. Aside for brief sunshine on the second day, it was grey and low light for the duration of my visit. And cold!! While the temperature was unexpected I was at least prepared for it. Breakfast was included in the price of my accommodation again, with the option of cooked breakfasts. I chose the Scottish breakfast and while I did retain the potato scone (I think it was) in my selection, I did forego the haggis. I have mentioned previously that I am a food wuss.

The second day was going to be busy-busy. Three bus tours, a boat tour, much walking of the streets and a big hill walk. Part 2 to follow.