In 2012 the Royal New Zealand Air Force turns 75. Among the many activities planned to mark the anniversary, last weekend they staged a big air show at one of the three air force bases in NZ: Ohakea, about two hours north of Wellington.

Being a fan of such things, especially since they happen fairly rarely here let alone on a military base, this event had been ringed on our calendar for the last three months. This may have been my first air show about 30 years ago…

With my brother and cousins and a Starlifter at possibly my first air show in the early '80s. That would be me rocking the pink tracksuit (which I loved, by the way mum)!

After quite an ordeal to get to Ohakea – which I’ll cover separately – we made it to the carpark in the paddock and walked as quickly as we could over the lumpy ground to catch up on what we’d missed over the last couple hours.

There were thousands of cars. Later there were crowd estimates of upward of 60,000 or even 70,000 people. No wonder there were traffic dramas.

Displays were spread out between the various hangars. We were first drawn toward the line-up of big planes, especially the biggest of the big, the Globemaster. This one courtesy of the Australians; the US equivalent was somewhere as well. 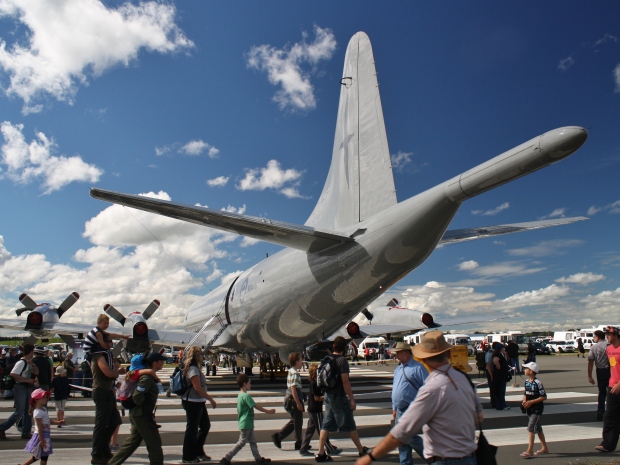 The pointy rear of a P-3K Orion surveillance plane 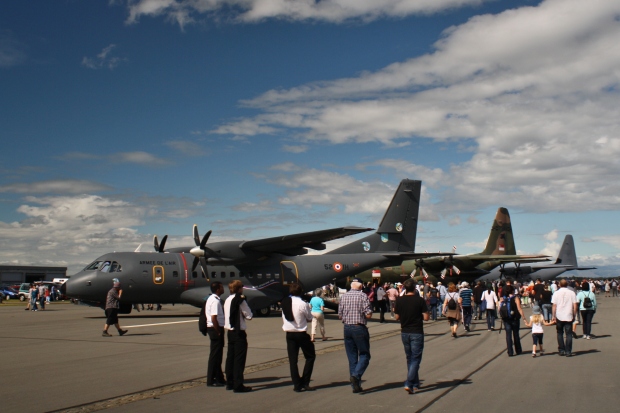 As part of the anniversary activities, several foreign Air Forces had gotten together for a training exercise in NZ. These were some of their transport planes.

Over near the new hangars being built for the Air Force’s new helicopters were static displays of these machines. A great opportunity to get up close and loads of people were taking advantage of this. I had to push my way through and throw a few small children aside, but I got there. 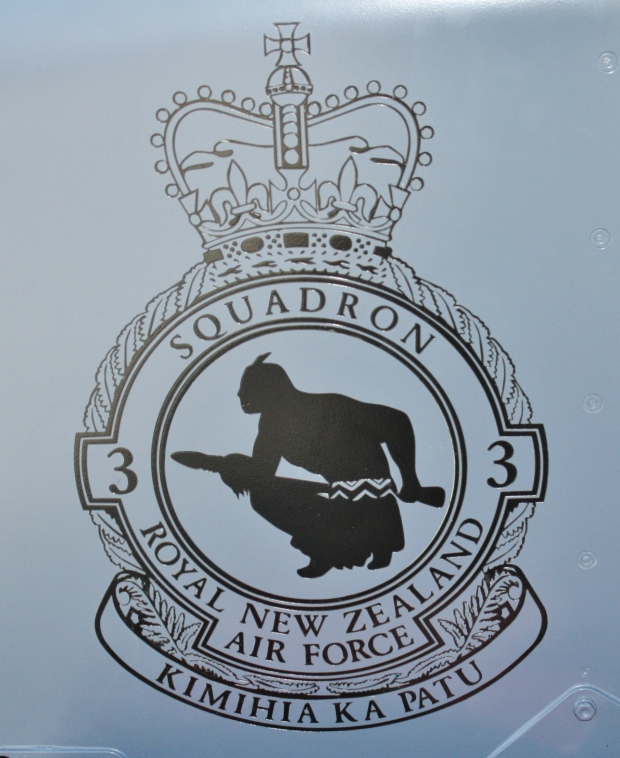 3 Squadron's emblem from the side of the NH-90

Another NH-90 was located on the flight line not far away and had about 50 less people around it. They will be replacing the Iroquois, which have been in service here since 1966.

The new machines are pretty, in a macho steel kind of way, but they can’t beat the sound of an approaching Huey.

The Hueys played a starring role in the show and we were gutted to miss the earlier display involving several machines. We made do with the smaller afternoon affair. 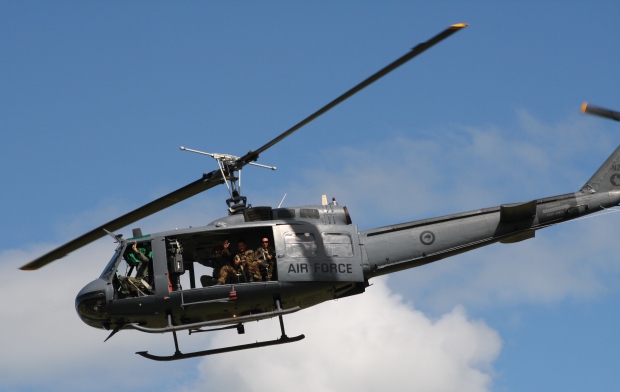 Iroquois with crew waving at the huge crowd

Warbirds were also prominent. These guys were fantastic. 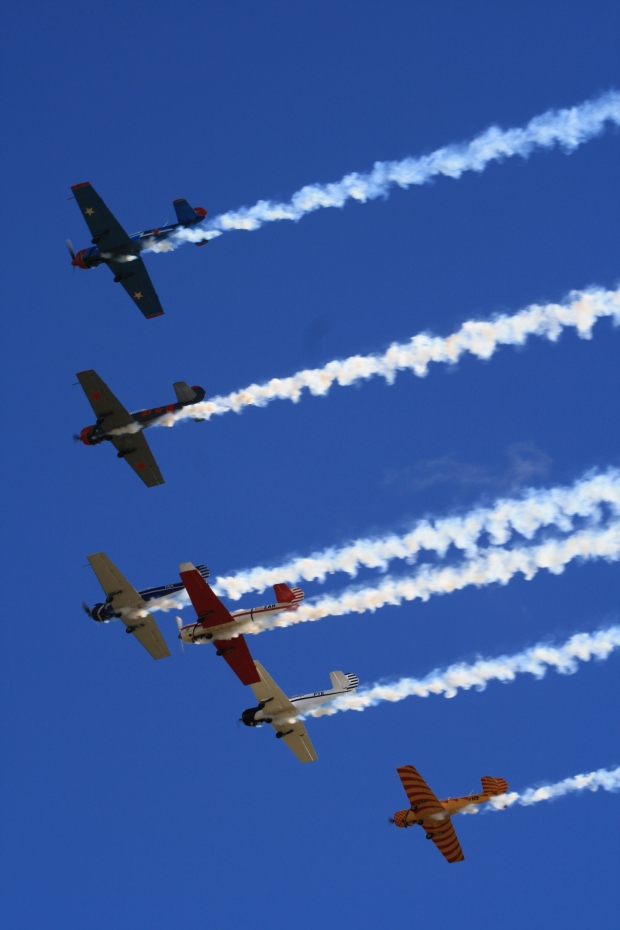 The Harvard Formation Aerobatic Team, aka The Roaring Forties

Figured I'd be quite unlikely to have this perspective again!

NZ has been without a strike force capability for 10 years. I have a soft spot for Skyhawks and Strikemasters because in the 1970s and early 1980s we lived at the end of South Kaipara Head and those planes would fly overhead to the nearby Air Force bombing range.

Me with a Skyhawk. These days they fall into the warbird category

Before the Skyhawks were taken out of service they made a publicised series of flying farewells around the country at the end of 2001. Living in Auckland at the time, I went to Whenuapai air base to see this moment in history. 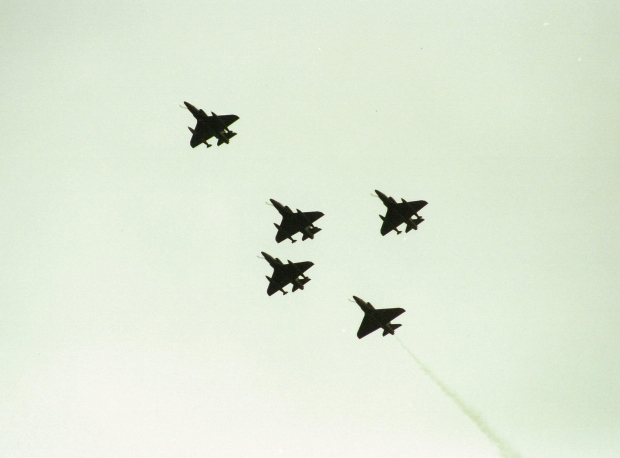 Skyhawks in formation above Whenuapai for the last time

The static Skyhawk and sole flying Strikemaster (with V energy drink sponsorship all over it!) were well and truly upstaged by the visiting F/A-18 Hornets from Australia. We unfortunately missed the earlier display of five F18s due to being in the traffic gridlock so had to be content with the solo display later in the afternoon. Still fantastic, since it is so rare to see fighter jets airborne in NZ now.

One F/A-18 isn't as good as five but is better than none!

The RNZAF aerobatic team, the Red Checkers, are probably at the top of any air show organiser’s list. 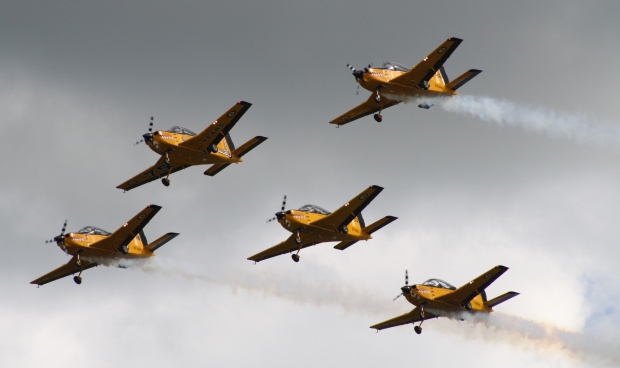 I was able to catch them again a couple of days later when they staged a display over Wellington Harbour.

The penultimate display was from the petite US Air Force Globemaster. A massive thing, it seemed to require a surprisingly short take-off (mind you, it was probably empty).

Lots of watchers atop the control tower

We wandered over to one of the old hangars, home to the main helicopter squadron. 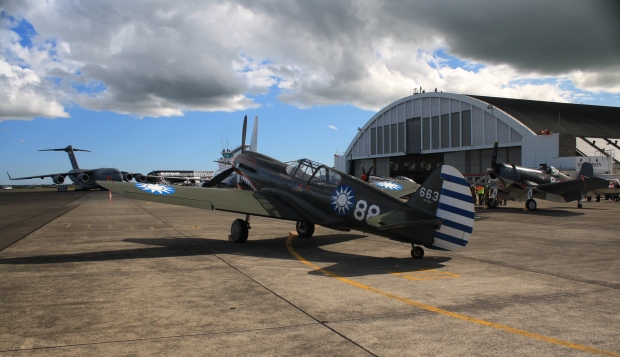 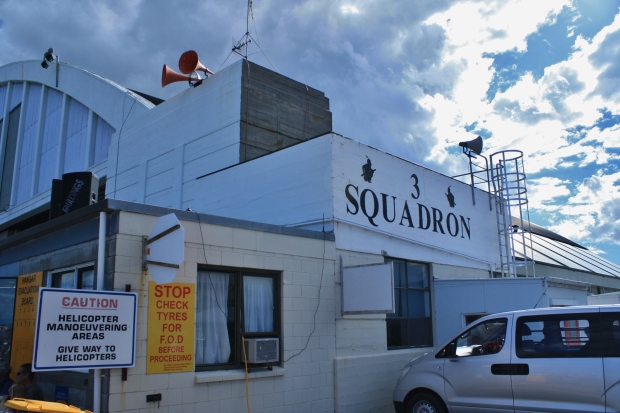 It was time to mosey on home. We had a relatively easy journey – thanks to all those people who left early! All in all it was a fantastic day. I’d never had any ambitions about wanting to fly but as a result of the brilliant displays that day, I did experience a twinge of that for the first time.