Cu Chi is famous for the huge concentration of tunnels built and used by Vietnamese communist resistance forces during the war. Because it was a base for Viet Cong, Cu Chi also became a focus point for American military operations. Nowadays, thanks to the close proximity to Saigon, it’s a big tourism site.

Over the last four decades vegetation has regenerated and as we rolled through the district on our bus it was difficult to imagine what it must have been like after being utterly hammered by bombs. We arrived at the tourism complex and followed our guide into one of a semi subterranean room for a presentation. 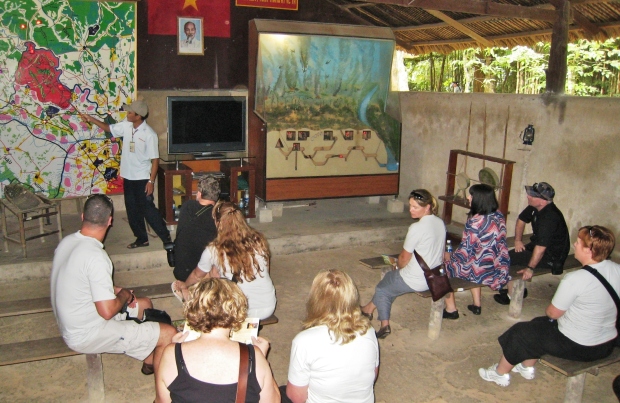 Our briefing before the tour

During my wanderings around Saigon a few days before, I (finally) relented to one of the persistently persistent child hawkers and bought a book called The Tunnels of Cu Chi. The quality looked OK enough and was plastic wrapped. Turns out it was a photocopy-of-a-photocopy type of publication and a little hard to read. Very interesting though, and I was 2/3rds the way through by the time we reached Cu Chi.

It struck me how intense it must have been for forces from both sides who used the tunnels to either evade or pursue – and ultimately, fight. A massive maze of small, dark spaces, filled with nasty bugs of both the health and creepy crawly kind, and danger always lurking. I can’t even cope with going into the crawl space under our house!

It was time for us to go looking at the tunnels, sections of which have been tidied up and englarged a bit for tourists. 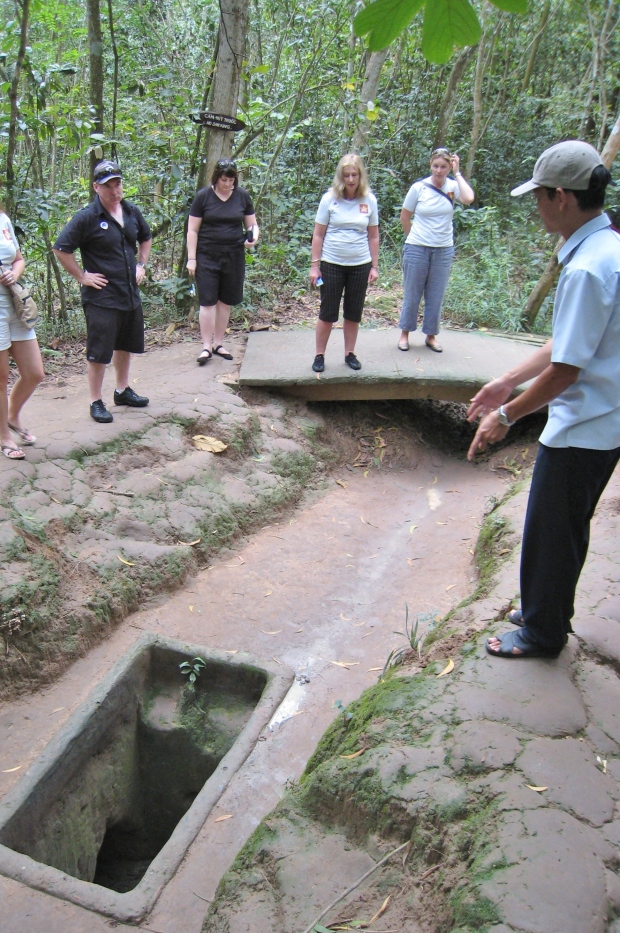 Our turn came to go in. Most of the group I think stepped forward to our underground portal and one by one hunched over and disappeared inside. I waited til the end of the line. I wanted to follow them in and got as far as crouching and shuffling in a couple of feet.

But then like a big reversing bus (though without the beeps) I backed out. Mainly because I’m a bit claustrophobic and it was so damn small, but also if I’m honest I was a tad paranoid about spiders after the last experience.

The tunnel that we were taken through. Or most of us. (I tried at least)

I joined the others where they popped out of the ground – feeling a little vindicated after one of the girls mentioned told me she saw a squashed spider – and we carried on our tour. 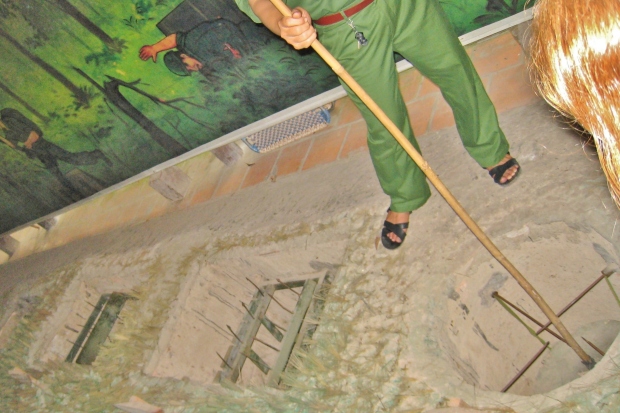 Some of the vicious traps used in and around the tunnels. Nasty stuff 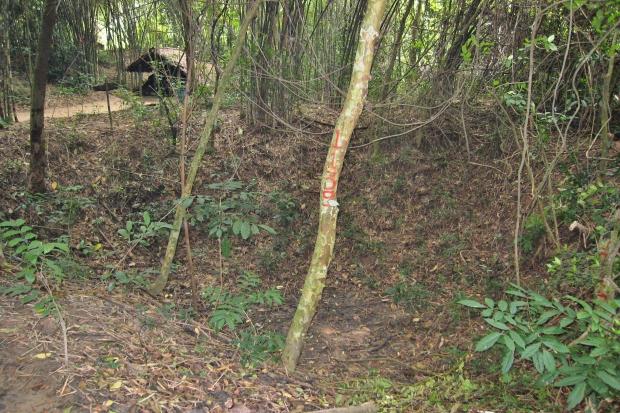 One of many B52 bomb craters around 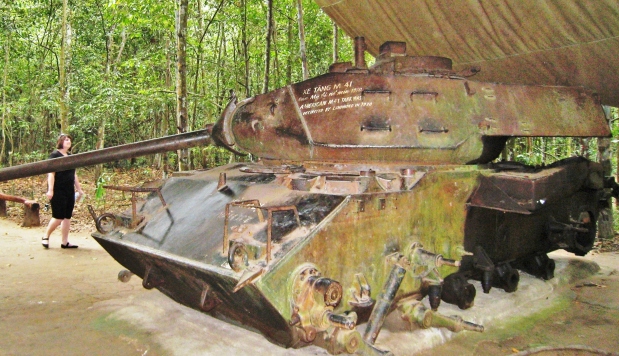 An American M41 tank in rather bad shape 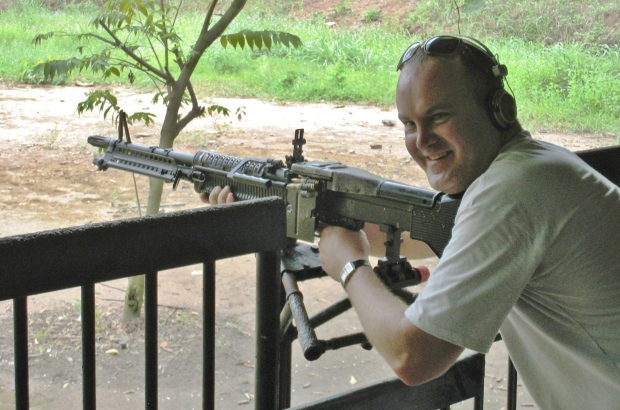 Mark sampling one of the firing range offerings. So loud! 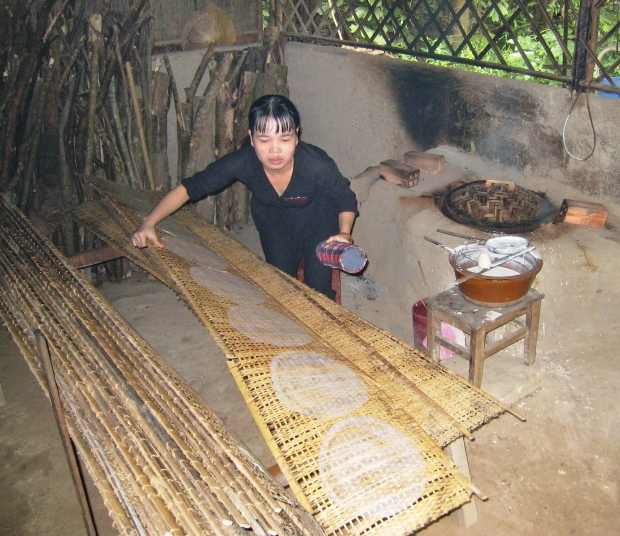 Rice paper made the traditional way 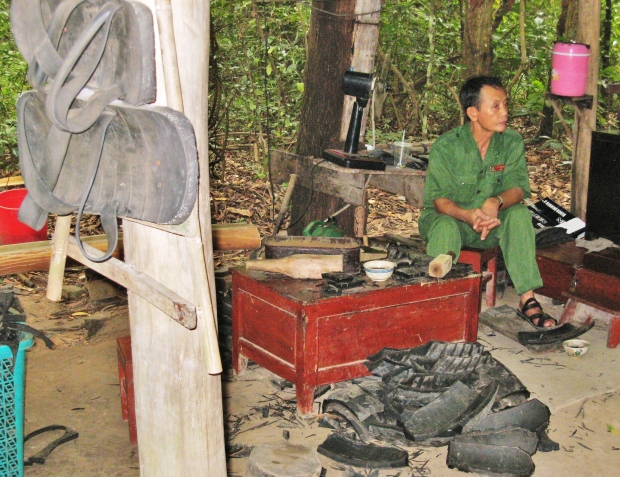 Sandals made from rubber tyres 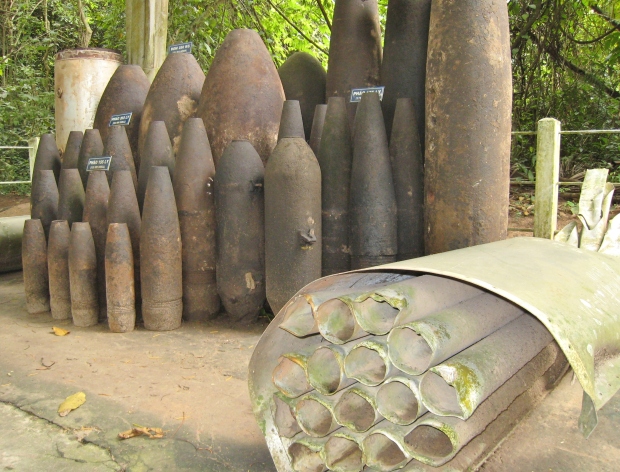 Ordnance recovered from the area

Pondering all that we had seen and done we reboarded our bus. It was really interesting to see Cu Chi and be able to relate the events of a time with the site that exists today. When you visit you are given a particular perspective on things and probably don’t get an opportunity to delve into too much detail. I found that having the extra information from the book gave me a greater appreciation of what went on and what the ‘tunnel rats’ had to endure than I would have otherwise acquired.

This concluded our stay in south Vietnam. Now we had a flight to catch to Danang.