Vietnam: 6~A couple of museums & a lot of walking

I had a couple of days left on my own and decided to see as much as I could on foot. Armed with a trusty tourist map to compensate for my less-than-awesome sense of direction I set out both mornings for a walkabout.

The Vietnamese street names, with their touch of French, were a mouthful but at least the streets were clearly signposted. Some were narrow, a bottleneck for the relentless streams of traffic. But that doesn’t stop the locals – if there’s not enough road, there’s usually a bit of footpath. With no place seemingly off limits for bikes, and with little shop stalls set up everywhere, and with often rough terrain, those on foot have to really concentrate on where they’re going.

I learned that it was best not to breathe too deeply when walking around. As well as the inevitable traffic fumes, the city has a pretty rank sour smell about it.

My main priority was the War Remnants Museum. I had heard a bit about it because of the harrowing photos on display. It first opened in 1975 under the new communist regime with its purpose to highlight ‘war crimes’ by the Americans and South Vietnamese. There were many gruesome photos showing both the direct and indirect casualties of war, including the effects of chemical defoliants. A very sobering but interesting place.

I trekked on in search of the noodle shop that had been a secret headquarters for the North Vietnamese in Saigon during the war. It was a bit elusive but eventually I saw another lone tourist who I figured had been looking for the same place so knew I was on the right track.

Not being a huge fan of traditional museums, I nonetheless thought I’d try to find the History Museum. This was also very tricky and I ended up finding it by accident as I was wandering through the zoo/botanical gardens. The zoo was something I definitely didn’t want to see as I thought it would be upsetting. But the grounds had loads of greenery, shade and peace and quiet so I hung out there til the museum reopened after lunch. Only to find that I could have happily given it a miss!

I found the road around the riverfront that would take me back to ‘town’. This took me past the big poncy hotels, though I can’t imagine the filthy river being much of a selling point. Back in the main part of the city, I saw the Rex Hotel, the very impressive City Hall building and stumbled across the Ho Chi Minh City Museum. Decided to risk a look so forked out the required 15,000 dong. Most interesting for me was the building rather than the museum contents. Built in the 1880s, it was the presidential palace until 1975 and many ornate detailing and fittings remain. Underneath there are bunkers and tunnels (much of it apparently flooded now) which extend all the way to the Reunification Palace.

Having covered the main stuff I wanted to see, the next day was more low key and had a shopping flavour. Luckily, as it was even hotter. No sign of tropical downpours yet though.

The austere War Remnants Museum from among the military hardware displays 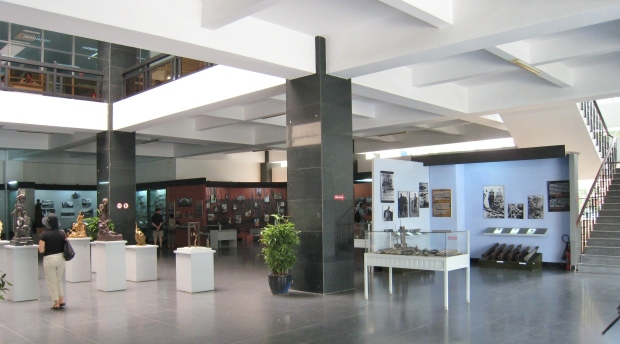 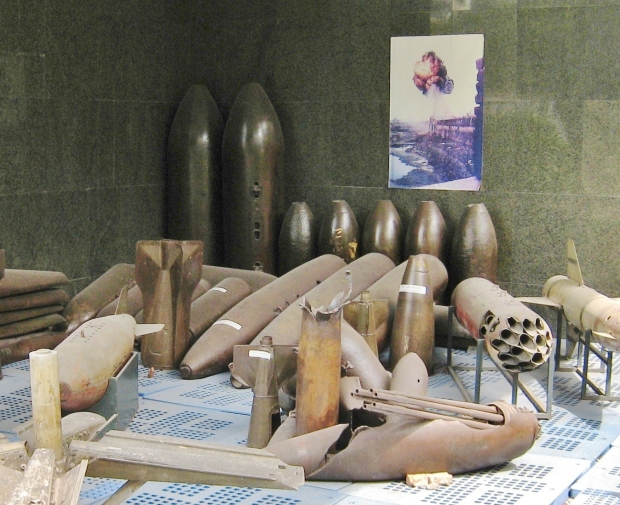 A pile of ordnance outside the museum 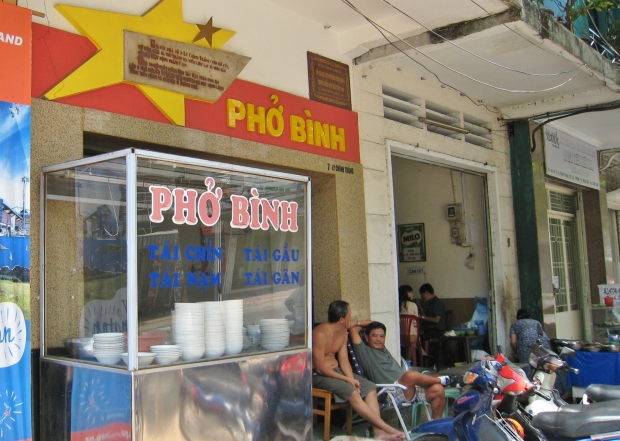 Pho Binh (in English, Peace Noodles!) was a covert base for Vietcong operatives during the war 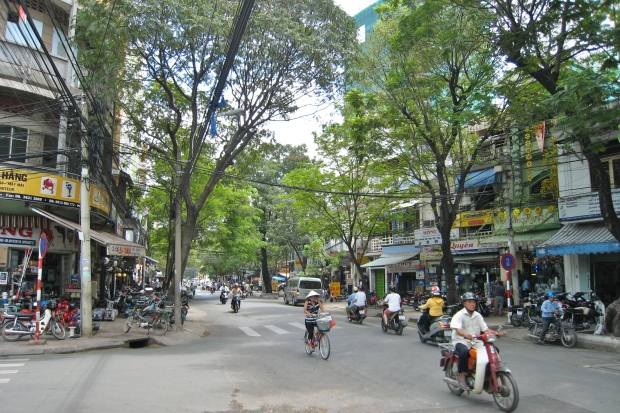 The trees made such a difference, helping balance the heat, noise, congestion and underlying sour smell 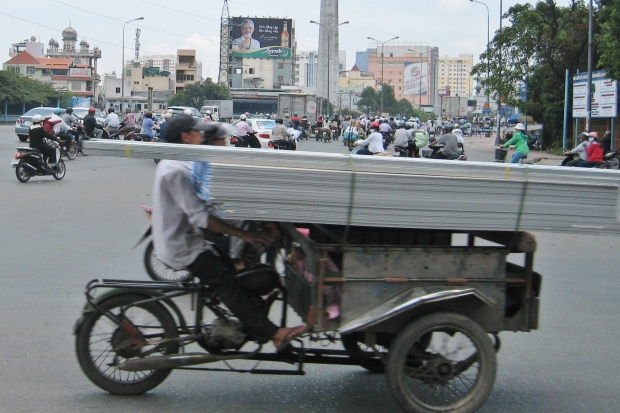 Who needs a truck anyway 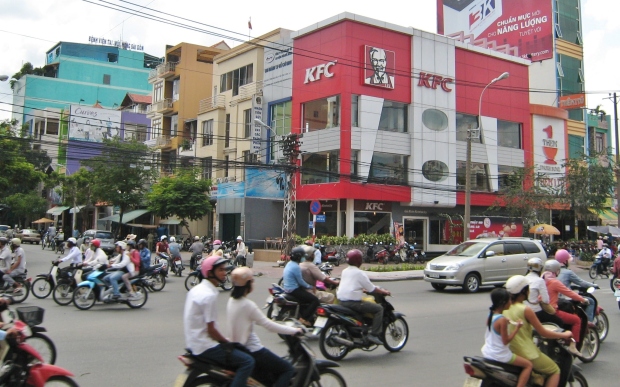 If it wasn't KFC, probably would've been McD's

Banks of the Saigon River looking toward the port. A pretty grotty river but there were a few people fishing. Tasty.

The Rex Hotel, famous among American personnel and journalists during the Vietnam War 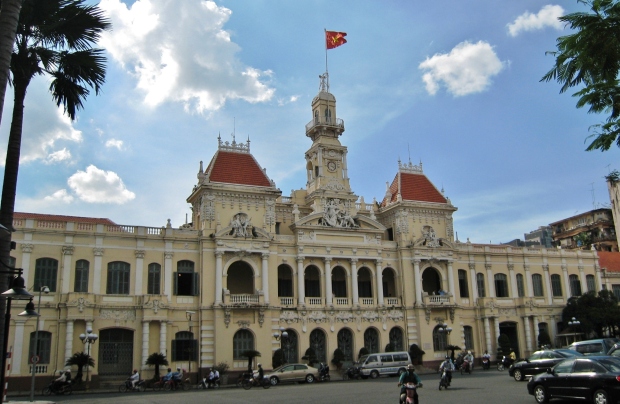 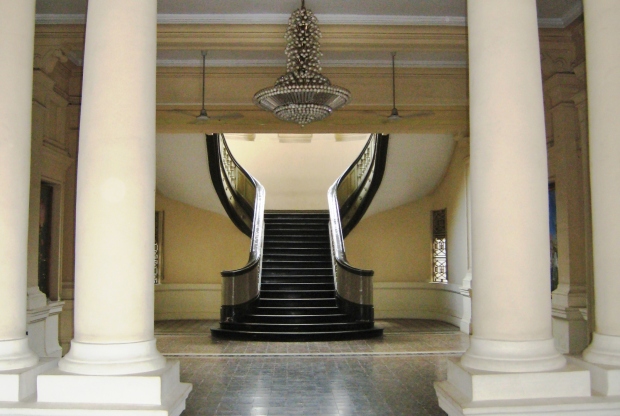 Inside the museum. Easy to imagine its former life as a presidential palace

A city constantly in motion 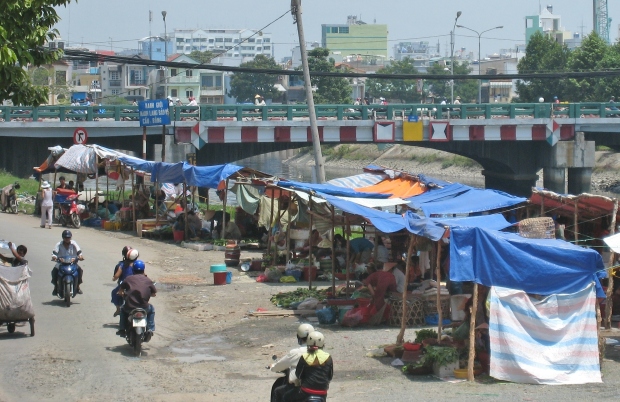 A marketplace set up beside the river

A Vietnamese woman sifts through some construction waste

I saw some big roading developments - this seemed to be part of a new motorway and they may have been filling in the river. General construction (including buildings) seemed to be a bit messy and shambolic but one can only hope the end results are sound. 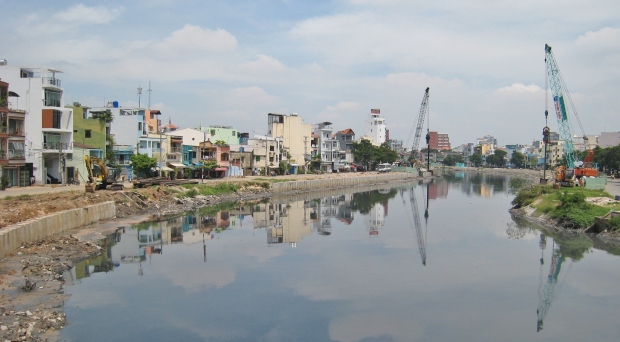