I was in Auckland for a long weekend following the Roger Waters show. With many family members and friends up thataway it wasn’t going to be hard to find stuff to do.

The timing was good for four other reasons:

So the morning after the night before, in no great hurry and after one or two deviations, I headed on out to my parents’ town. At their place I found Mum, Gran (who lives with them now), and my brother who had a day off work nursing his dodgy back. It was a normal working day for some though and I wouldn’t be seeing Dad til later.

Gran came with me to run an errand up the road

Also in the house was an old childhood friend. Mum and Dad recently retrieved him from storage. He’s needs some running repairs but at some point he’ll be well enough to relocate to Wellington. 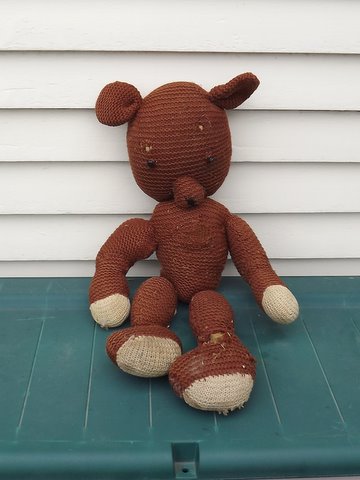 A little the worse for wear, but Big Ted isn't bad for almost 40

After lunch and whatnot, Mum and I got into trip planning. I’ll preview this in a separate post. It’s eight weeks til my departure so I’m on a bit of a countdown. Any trip outside of NZ is pretty significant!

Later, in the midst of rental car comparisons and bookings, a rather grubby father walked through the door. The plan was to go out for dinner as while there was a birthday celebration or two for Mum earlier in the week, my visit was good excuse for another. We decided on a local restaurant. A few of us were feeling a bit poked so after making ourselves presentable we went in for an early sitting. 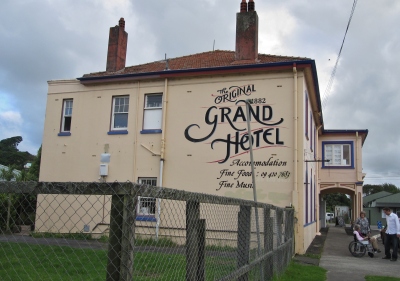 You could say that the Grand Hotel is one of Helensville’s icons. At the eastern end of town, the hotel was originally wooden and burned down, twice. Consequently, the rebuild in the 1930s was done in concrete. New owners have renovated The Grand and restored many of its original features. They’ve done a lovely job and I’d like to have a better look around one day.

Tis a bit Grand I spose - for Helensville at least!

We’ve eaten at the restaurant before and it was definitely worth a return visit. The dining room is quite stunning: red walls adorned with artwork, concrete floors, fireplace, striking chairs and ceiling lights, arched windows. The menu options are well matched to this quite grand room, and as we were all pretty hungry we didn’t muck around with our decision-making. 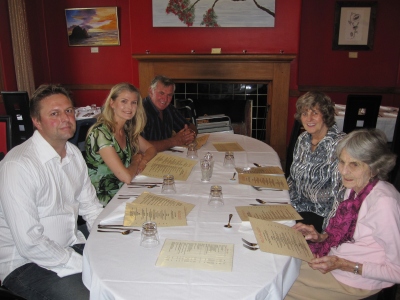 To the exaggerated sighs of some at the table, the wait for food was an opportunity for photos.

Mum, Gran and I

The meals were great and everyone enjoyed their selections. Since it wasn’t late, some more trip plans were sorted when we got back home. I farewelled everyone when I had to take myself back to the motel for sleep as would not be seeing them the next day.