New Year Trip: 1~To the north!

Twas a quiet morning the day after the day after Christmas. My car was set, packed with 95 octane and the essentials for a week on the road. I set sail to the sounds of Pink Floyd – homework for the Roger Waters show in Feb – as Dario Franchitti started issuing instructions in his charming Scots accent.

I was making the annual end-of-year trek north to see family and friends and do a few other things. Spending all day in the car is one of my favourite pastimes but today there were way too many others on the road. Tis the time of year for it I guess. Another moderating factor was that being a holiday period, there was a lower speed tolerance. Over 104kph you’re a sitting duck.

The routes are very familiar to me but I elected to follow the most direct way according to the TomTom. This was State Highway 1 via the Desert Road then up the western side of Lake Taupo; just like last time, this was blessedly quiet.

Some small towns will forever be linked with high profile crimes and I was reminded of this when passing through Turangi and Tokoroa given events of recent weeks. Tirau was quite the opposite, the busiest I’ve seen it with holidaymakers en route to wherever. I hopped onto SH27 which later blended into SH2 and then joined SH1 again. And then – hello Auckland traffic.

But it’s not all doom and gloom and over the next few days I would be amazed at the motorway developments since I last ventured into certain parts of the city. Once in Manukau it only took a relative jiffy to get to Sandringham where I was stopping briefly to catch up with friends celebrating their son’s birthday.

Parakai was today’s final destination though, via a stop in neighbouring Helensville. Dario directed me via a back route which quickly became my new favourite stretch of road. The rest of the evening was spent with mum, dad, gran and a sunburned brother. While I was too tired to bother with the mineral spa back at my motel unit later, it was at least a comfort that there were no police helicopters overhead this time. 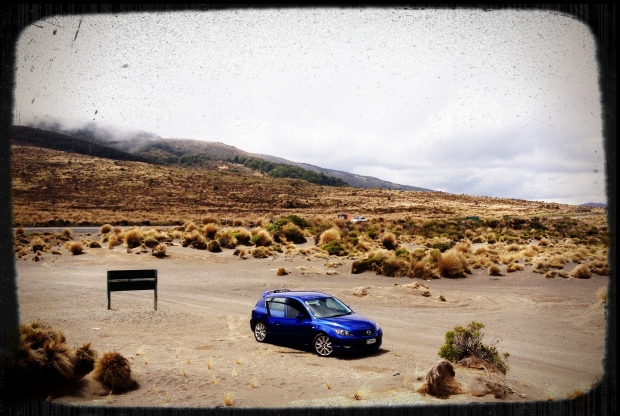 The National Grid marching up the country

Over the tussock, the road north