The morning arrived and I peered through the curtains… still no sign of falling white stuff. I was starting to feel a bit let down!

After wrestling our bags out of the hotel and checking out, it was off to revisit our fave Queenstown breakfast cafe, Motogrill. Fortunately yummy coffee and food came fairly quickly. Queenstown has a bit of a nazi reputation with parking and many spaces are regulated by the quarter or half hour, but we escaped unscathed.

The main objective today was to get to our accommodation for the next few nights in the Cardrona Valley. It is somewhat isolated, or at least not in easy reach of supplies, so we found a supermarket to stock up in before we left town.

With bags of food and drink wedged into what little space remained in Mike’s car, we set off in lightly falling snow. The next stop wasn’t far away, to have a coffee with Ants. We heard that those in the group from last night who were to fly home had their flights cancelled, the first real sign of the impending weather.

We decided to call into Arrowtown, a lovely place that has retained a look and feel from its gold mining days. A short walkabout ensued before it was time to get our act together and go. Pie no.4 called out to me but I showed surprising restraint. 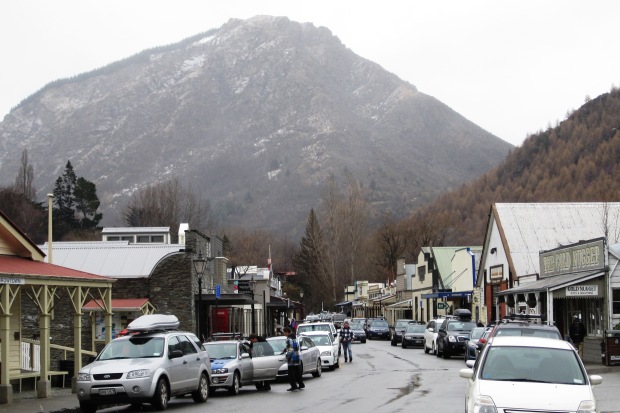 A short stop in lovely Arrowtown

The Crown Range Rd is the most direct route between Queenstown and Wanaka and goes through the Cardrona Valley. At just over 1100m high, a lot of the road is well into the snow line during a half-decent winter. On the way to the turnoff snow started to fall heavily and continued as we made the hard-left turn and began to ascend the zigzag.

The snow began as we headed for the Crown Range Rd

A few minutes later we arrived at the sign directing us to fit chains and we joined the little hub of vehicles already undergoing the transformation. Mike purchased our set off TradeMe a couple of years ago and they sat unused, until now. Looking at our neighbours struggling with their chains, and looking at the tangled pile that was ours, did cause us to wonder how long this would take.

Mike getting down to business

However, Mike managed to interpret the Japanese instructions – or at least, make sense of the diagrams – and after 20 or so minutes they were on. 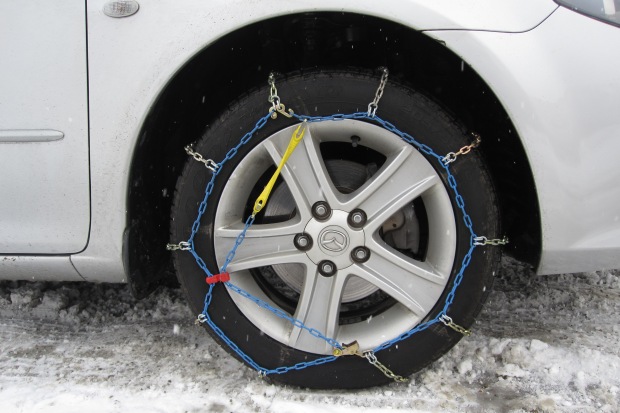 That is one finely fitted chain

We slowly nudged back onto the road and found ourselves behind the most unlikely of vehicles given the conditions. Very keen!

You don't often come across a car with chains on the rear wheels. Zephyrs probably aren't your typical alpine transportation

Travelling at an average speed of 50kph, the road seemed much longer and it took ages to reach the summit. The conditions made me a bit on edge so it wasn’t exactly a relaxing drive, but creeping along gave us more opportunity to take in the amazing white landscape. 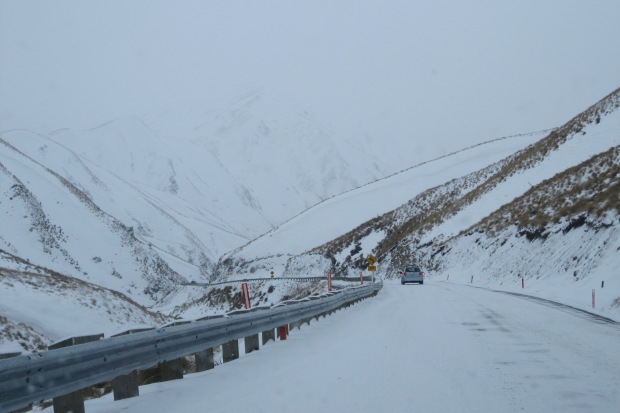 The slippery white road with ressurance of a barrier to the left and bank to the right!

A few k’s later on the other side we* were able to shed the chains (*clearly I mean it was Mike out there doing the detaching) and a few minutes later we rolled into Cardrona. 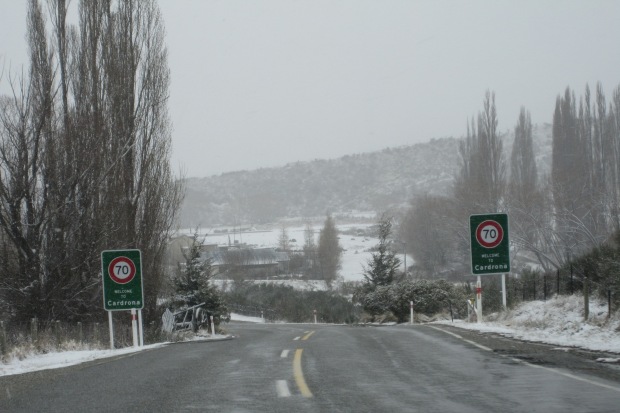 The end is nigh - arriving in Cardrona 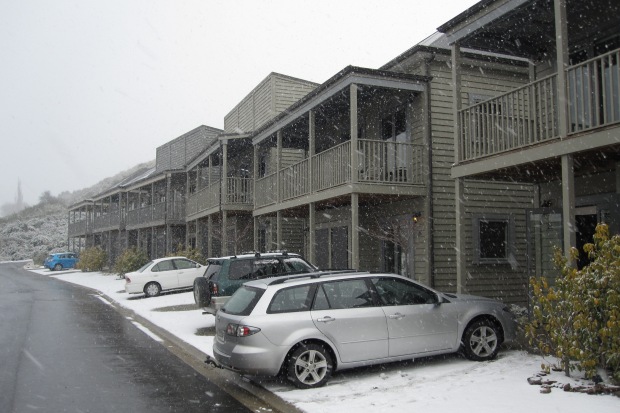 Made it! The comfy lodgings at Benbrae

Now that we were at the resort, with its fantastic insulation and heating and outdoor hot pool, it could snow all it wanted…

Go here to pick up the rest of the trip.