I planned just the one night in Whitehorse before continuing north in my rental. A German girl who happened to be on the same bus and who stayed at the same hostel was also keen to go further afield, so she tagged along.

Our destination was the town of Dawson, some 500kms up the Klondike Highway. Originally a First Nations camp, Dawson boomed during the goldrush and shrunk just as quickly afterward. Today gold mining is still an important industry along with tourism.

We set out on the quiet road in the subarctic landscape. 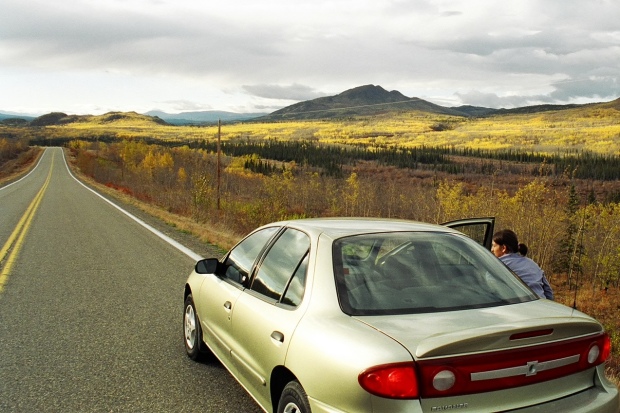 There was no shortage of reasons to veer off the road for photos, such as these cabins – I think they may have been resting places harking back to days when horsepower meant just that.

The Yukon River is the longest in Alaska and the Yukon and it popped up numerous times along the way. A popular viewing spot is here looking down to the Five Finger Rapids.

I like that it wasn’t a blue sky day as it added to the atmosphere.

Another common sight along the way is evidence of forest fires. I read that they tend to let them burn up here and the climate inhibits regeneration.

And here again, closer to Dawson. Now that we were further north the snow started to appear.

On the outskirts of town we found this cute tourist gimmick and huge piles of mining tailings.

We knew we were visiting at a quiet time of year and happened to arrive at the visitor centre 15 minutes before it closed for the season. Most of the town closed the week before. However this was OK by us and there were still basic things open to last us the night before continuing on our way.

Since there was no lingering at the visitor centre we found a hotel and got out to explore this fascinating town in what daylight there was left.