Wellington is a great place to visit and to live. I’m not born ‘n’ bred but have been here a few years now and the best thing about for me is its rather epic location. Tucked at the bottom of the North Island, Welly as it is fondly known sprawls over rather brutal hilly bush-covered terrain until it hits the CBD on the waterfront. This is the eastern-most part of the fabulous Wellington Harbour which gives the city the coastline that partly typifies it.

I live on the Miramar Peninsula located in the south-eastern corner of the city. It is a peninsula thanks to an earthquake in the 15th(ish) century which changed its former status as an island. As well as coughing up the flat land on which my house sits, the earthquake also gave Wellington an ideal place for its airport. We’re supposedly overdue for another Big One – however we won’t dwell on that.

I love living so near to the coast and being able to see the harbour every day. The peninsula has a perimeter road which is popular for sightseers, cyclists, runners and their much slower counterparts, and people seeking kaimoana (seafood). Opportunities exist for motorsport enthusiasts too, with sprint events a couple of times a year. My own running days are now behind me but I take in the occasional walk locally and was recently seized by the idea to complete a full circuit of the peninsula. So last weekend armed with camera I set off on the 17km journey. 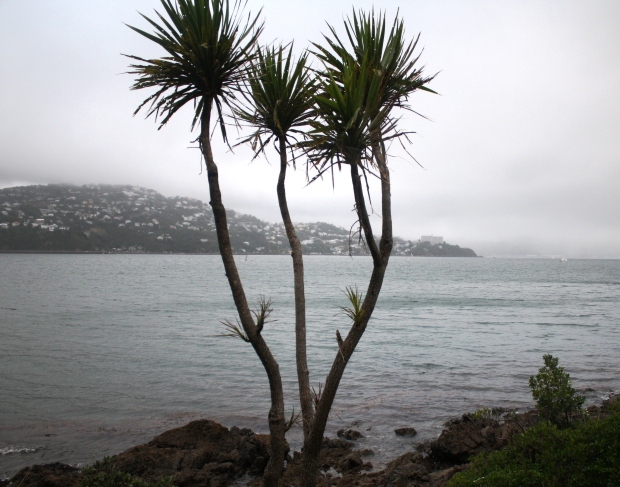 The weather gods were in a bit of a grump this day giving me dull overcast light and misty rain, however I love Welly in all her moods – especially dare I say it when she’s mightily ticked off. (Most locals agree though, the often present wind can make you a bit batty.) In my favour was that the weather blahness reduced the general levels of activity around the road, a good thing when I lingered in the middle of it a couple of times to take photos.

In some parts I found quiet moments to take in the surrounds with no buildings, vehicles or people in earshot or sight. Blissful, though by no means unusual around Wellington. Around the peninsula there is always something interesting to look at and a few of these features are:

Wharf remains at the old Shelly Bay base 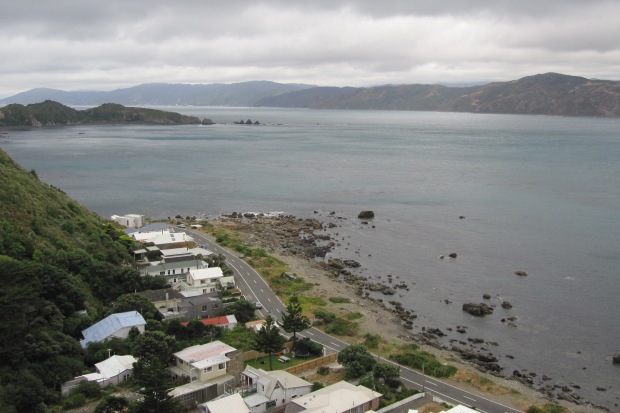 My route home on this occasion took me via the airport through road, with suburbia then replacing coastline as I made the final homeward trudge, legs sore from four hours of activity and feet dying to be freed from grit-filled socks. Spirits tired but happy.